“We’re asking you to commit the South Australian Government to using your power purchase to support the construction of a large solar thermal plant in Port Augusta,” states part of the brief letter.

“Projects like this would support your Government’s aspiration of South Australia being the Just Transition capital of the world. This critical intervention will create badly needed jobs, on-demand clean power and start a new industry for our community and South Australia.” 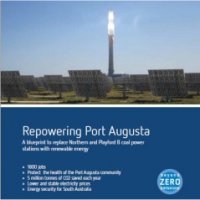 The proposal, Repowering Port Augusta, was developed by Beyond Zero Emissions in 2012. The proposal doesn’t include solar PV as its focus is on providing baseload/ dispatchable power. However, it acknowledges the important role that small and large solar power systems will play in Port Augusta and South Australia’s clean energy future.

The proposal was well-received by the community, led to a Parlimentary inquiry and also an attempt to fund a feasibility study, but things appear to have ground to a halt in recent years; aside from the ongoing and determined efforts of supporters.

While the Repower Port Augusta vision is yet to be realised, another project in the region will soon deliver significant investment, jobs and clean power.

As we mentioned earlier this week, development approval has been granted for the Port Augusta Renewable Energy Park. The facility will incorporate up to 59 wind turbines, 1.6 million solar panels and generate enough electricity to supply approximately 200,000 households.