Lobby group Repower Port Augusta has announced the result of a community vote that received 4000 responses, with 98 per cent in favour of solar thermal power over the alternative option of gas.

The coal-fired stations are to be downsized due to supply and demand factors.

Council Mayor Joy Baluch says the shift in power generation is the “most crucial issue” she has faced in more than 20 years as mayor.

“The Port Augusta community has spoken up and it is time that the Federal and State governments get behind this proposal and support clean air and jobs for the town,” she said.

Repower Port Augusta chair Liz Zyla said the purpose of the community campaign was not to force a decision but to prompt conversation between the community and governments.

She said the current coal-fired power stations had come to the end of their working lives and the community had the opportunity to create jobs by building a solar thermal plant.

Beyond Zero Emissions released a report earlier this year that claimed 1500 construction jobs and 360 on-going jobs would be created by the solar thermal option. 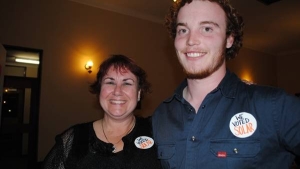 “We have an opportunity to build the first solar thermal plant with storage here in Australia – now our leaders need to step up and take it.”