This conversion works with concentrated solar radiation at 1000°C using photon-enhanced thermionic emission (PETE) mechanism and black diamonds to overcome the limitations of common PV cells. While conventional PV cells use only a portion of the sun’s spectrum to obtain electricity, PETE technology uses a black diamond semiconductor that utilises the entire spectrum of sunlight, including infrared wavelengths that produce heat. The increased efficiency of the process is therefore a combination of conventional photogeneration and thermal energy mechanisms.

The system proposed in Prometheus project can act in the future as substitute to the fluid in the primary cycle of the concentrated solar power (CSP) system, acting as a ‘topping cycle’ of CSP electricity generation systems where waste heat from power generation is utilised to provide useful thermal energy. CSPs are considered one of the most cost-effective technologies for reducing CO2 emissions in the future.

The Prometheus technology is also compatible with existing energy conversion stages and storage systems, which is necessary to respond to the daily fluctuations in energy supply from intermittent source like renewable energies. In addition, non-toxic and non-critical raw materials are used during assembly to minimize the environmental impact of manufacture. 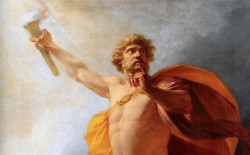 According to the International Energy Agency (IEA), Concentrated Solar Power could provide 11.3% of global electricity by 2050
To develop and optimize the technology concepts from Prometheus, two new projects have emerged: AMADEUS and DMS. The first explores next generation materials and devices for latent heat thermal energy storage (LHTES) at ultra-high temperatures of up to 2000°C. The latter, DMS, aims to bring the dielectric microspacer technology developed during Prometheus to market, which is a means to keep a small but stable distance between two surfaces — the two electrodes in the case of the Prometheus technology.

The €3M Prometheus project contained seven industrial and academic partners and was coordinated by Daniele Trucchi at the Consiglio Nazionale delle Ricerche. See this Slideshareand the Prometheus Final Report for more information. Prometheus technology and further enhancements from DMS and AMADEUS are helping the EU meet its targets of reducing its greenhouse gas emissions to 40% of 1990 levels by 2030.

See more news from this contributor