The solar thermal is the most competitive alternative to generate electricity from the sun, complementing the photovoltaic and avoiding CO2 emissions.

The new solar power must be a combination of photovoltaic and concentrated solar thermal to overcome the EU’s objectives of renewable and decarbonisation by 2030, with a cost of less than 5 c € / kWh.

The main international Concentrated Solar Power event in Spain, which has the technical assistance of Protemosolar, analyzes real possibilities of renewable energy systems 24/7. 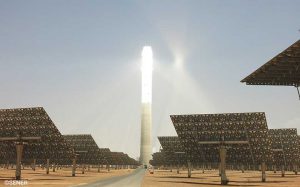 Companies and energy managers from countries with abundant solar resources meet in Madrid to analyze the situation and prospects of the solar thermal sector.

CSP Today, with the collaboration and technical assistance of Protermosolar, organizes the XII International Summit of Thermoelectric Solar Concentration in Spain, a landmark event in the solar thermal sector, which takes place in Madrid today and tomorrow. 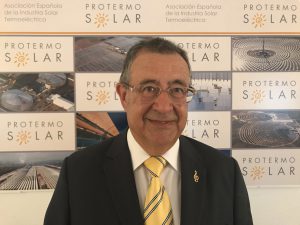 The president of Protermosolar, Luis Crespo, has given the inaugural lecture, in which he has identified the solar thermal power plants as «the piece that is missing from the other two renewable technologies with greater implementation, wind energy and photovoltaic, to complement their production from the sunset and eliminate the dependence on the combined cycles».

In the Energy Transition report of the Electric Sector, Protermosolar demonstrates, through the projection of the real production data of renewable technologies in the past years to the 2030 horizon and with a balanced generation structure between manageable and non-manageable renewables, which would not there is no lack of nuclear power plants or all combined cycles to be able to have, at all hours of the day, mostly renewable generation (85.6% of annual contribution in 2030) fulfilling all the requirements of synchronism and ramps of hourly variation and at a price end even less than 5 c € / kWh.

For the president of Protermosolar, «it would not be understood that countries such as Spain do not take advantage of the excellent conditions for the deployment of concentrated solar thermal power plants that would allow us to move towards a largely renewable electricity generation, removing the obsolete and polluting coal plants, as well as the nuclear ones, at the pace that orderly it can proceed to its dismantling, without this means a cost increase for consumers but, on the contrary, a reduction of costs at the same time as a unique opportunity to boost the economy of the country «.

As indicated by Luis Crespo in his inaugural speech, «energy efficiency and demand management, together with the adequate use of interruptibility contracts and the increase in interconnections, would be sufficient for the deployment of new solar power, together with the technologies, wind power, photovoltaic and biomass, in addition to the contribution of hydraulics, it can be limited to 2030 the support of gas at levels below 5%.

More than 27 countries participate in the Summit through representatives of companies, organizations or energy managers, and among the main topics that will be presented are the cases of the Arab Emirates, Morocco, China, South Africa or Chile, in which the solar thermal power plants they are being planned to satisfy the demand of the system with an adequate combination of the rest of renewable energies available.