Protermosolar: Concentrated Solar Power sets a historical generation record in the first half of 2019 in Spain

Protermosolar: Concentrated Solar Power sets a historical generation record in the first half of 2019 in Spain

Solar thermal power has set a record for electricity generation, surpassing 2,801 GWh in the first half of 2019, which represents a generation volume 19.3% higher than the historical average, according to the REE data collected by Protermosolar, the Spanish Association for the Promotion of the Solar Thermal Industry, which indicates that Concentrated Solar Power generation represents 2.38% of the total generated in Spain in this period and also means reaching a record of contribution to the system. 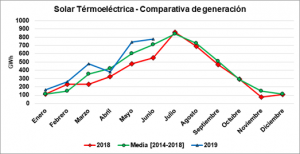 Protermosolar also points out that last June, concentrating solar power contributed 775 GWh to the system, the second historical maximum and 9% higher than the historical average of that month, with hourly contribution points that accounted for 8 , 84% of the total generated (average monthly generation of 4.08% of total generation in Spain.

Protermosolar highlights that these figures are achieved with the same installed capacity as in 2013, demonstrating the reliability of the technology and the maintenance of efficiency despite the fact that several plants have already exceeded 10 years of operation. The Spanish solar thermal park is formed in 1/3 part by power plants with storage, which load and unload their tanks more than 250 days a year, maintaining their capacity of operation without degradation and allowing to generate electricity after sunset.

For Protermosolar, these data show the confidence that must be had in this technology and the rightness to propose a greater deployment, such as that foreseen in the PNIEC, in this next decade to reach the 2030 objectives. In this sense, to implement systems of storage in those plants that currently do not have it or hybridize some plants with biomass, would reinforce their value for the system. Regarding the future fleet, its complementary office to the photovoltaic one would contribute to the integration of renewable energy in the system, optimizing the transmission infrastructures, existing and future, and contributing to the stability of the network.

The new concentrated solar thermal power plants, equipped with large storage systems and dispatching electricity from dusk, would alleviate the ramps that would cause the daily fall of photovoltaic production in the afternoon and would, to a large extent, avoid emissions that would otherwise , would be associated with the combustion of gas in combined cycles. But in addition, storage tanks of solar thermal power plants could be used to capture the discharges of wind and photovoltaic technologies, avoiding investments of more than 20,000 million euros in battery systems or new pumping facilities. The solar thermal power plants could act as a strategic reserve at the disposal of the system operator for the moments of maximum demand, being able to maintain an important part of their capacity during days, weeks or months, when required with absolute availability.

Protermosolar is the association that represents the Spanish sector of the thermoelectric solar industry and is composed of 48 members. Solar thermal technology, in which Spain is an international leader, has recently entered the world of renewable energies with strength and currently has great growth potential due to its manageability and storage capacity, due to its high employment creation local and for its potential to reduce costs. The installed capacity in Spain is 2,300 MW and the contribution of Spanish companies in international markets is around 75%.