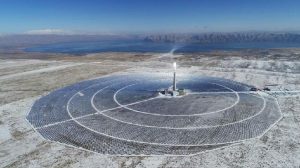 3 companies and 4 consortia companies wins the bids, as was shown on the chart below:

3 CSP projects are included in the first 3 bids, each of them consist of 900MW PV and  100MW CSP. These 3 bids were shared by 3 consortia separately.

Bid One was taken by a consortia led by China Energy, one of the biggest Coal and Energy groups in China, together with Power China Northwest, the EPC of Qinghai Gonghe CSP project, a 50MW molten salt Tower CSP project in operation since 2019.

Bid Two was won by a consortia led by Huanghe Hydropower Development, together with Cosin Solar and CNOOC Rongfeng Energy. It worths saying that the lead company Huanghe Hydropower was one of the winners of first round of 1.4GW CSP pilot projects dated back to 2016, but it failed to execute the project in the past five years. Cosin Solar, previously known as Supcon Solar, is the EPC company of Qinghai Delingha 50MW molten salt Tower project, and also the technology provider of above mentioned Qinghai Gonghe CSP project, with Power China Northwest the EPC. And CNOOC Rongfeng Energy is a Wind Power investment subsidiary of CNOOC, one of the top three oil giants in China.

Bid Three, the last one with CSP, was bagged by China Three Gorges Renewables (lead) , the biggest RE investor and operator in the world, and Shouhang Hi-Tech. Same as Huanghe Hydropower, CTGR was also one of the winners of first round of 1.4GW CSP pilot projects dated back to 2016, but did not even start the project till now. Shouhang Hi-Tech, a public company listed in China stock, is the owner and EPC of Shouhang Dunhuang 100MW molten salt Tower CSP project, which was completed and in commercial operation since end of 2018.

As was required in the RFP document, the winner of bid should take care of the project financing, engineering, construction, commissioning and O&M. Projects COD is Dec 31, 2023 and operation time 25 years.

A New Era of CSP Begins in China

As was analyzed in the latest news release by CSP Focus, “CSP Opportunities under China’s “Net-Zero” Ambition”, CSP was recognized as a key stabilizer in the power system as more REs portfolio in the future energy mix.