Concentrated solar power (CSP) could have the potential to energise remote areas of the world, but it faces one major obstacle – the amount of water it uses. Now, thrifty water sprinklers, tailor-made rotors and hybrid sunlight-biomass boilers could cut the water bill of concentrated solar power and even help generate electricity when the sun doesn’t shine.

In CSP plants, an array of large mirrors is used to concentrate sunlight, focusing it enough to turn water into steam and drive power turbines. The turbines generate electricity much as those of fossil fuel plants, only without the fuel expenditure or the greenhouse gas emissions.

It’s one of the technologies that scientists on both sides of the Mediterranean are field-testing to supply remote communities with reliable energy sources, with CSP offering particular promise for rural electrification in sun-baked regions such as sub-Saharan Africa and the Middle East.

One in seven people worldwide still has no access to electricity. Generating their power on-site could work out cheaper than extending the grid to reach them.

However, while the cost of concentrated solar is coming down, the technology still suffers from one fatal flaw: most plants consume enough water to drain an Olympic-sized swimming pool each day. Two EU projects are now rethinking water management systems to bring CSP to the arid climates where it is most needed.

Delphine Bourdon is a thermal engineer at the French Alternative Energies and Atomic Energy Commission (CEA) in Le Bourget du Lac, France. She explains that, like all heat engines, concentrated solar plants rely on a temperature gradient to convert thermal energy into motion.

‘Steam needs to be as hot as possible on one end of the generator and as cold as possible on the other,’ said Bourdon. ‘If you just leave the power plant to heat up in the sun, its efficiency quickly drops and components start breaking down.’

At present, operators cool CSP plants by lavishing water on them. As coordinator of the EU-funded WASCOP project, Bourdon will spend the coming three years examining new technologies to refine intelligent management methods for cooling systems.

Air ventilation will be used throughout the day to keep the working temperature as low as possible. Water-cooling will kick in at hours of peak production but in sparse sprinkles that maximise the heat absorption of each drop.

Dr Falk Mohasseb, director of research and development at Kelvion Holding GmbH, a manufacturer of industrial heat exchangers in Bochum, Germany, agrees that smart optimisation is the way forward. 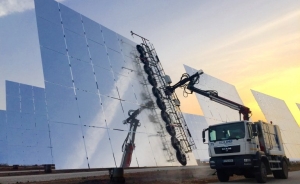 He coordinates the MinWaterCSP project, which focuses on advanced cooling and mirror-cleaning technologies. The project is developing a fan shaped to match the specific airflow and static pressure demands of individual concentrated solar plants.

This could replace the generic fans commonly used today, which are not designed specifically for the plants they are installed in. According to Dr Mohasseb, MinWaterCSP’s customised fans offer improved performance, with a 10 % increase in efficiency already achieved in laboratory tests.

A fan with a diameter of 7.3 metres is now to be tested on the campus of Stellenbosch University in South Africa.

Dr Mohasseb says the pitfalls to be avoided in scaling machines up to such dimensions include the mechanical constraints on materials, vibrations, and especially noise. ‘If the fan is too loud, it will never find a market,’ he said.

Heat is not the only factor driving water usage in CSP plants. Sunny regions also tend to be dusty, which means frequent cleaning of their vast mirrors. This typically consumes less water than cooling generators, but it requires water of a higher purity.

MinWaterCSP is developing a collection system to recycle runoff water and teaching a water-conscious robot to clean the components of so-called Fresnel reflectors – a concentrated solar technology that uses flat mirrors to focus the rays of the sun.

The WASCOP project is investigating whether fences and vegetation barriers around test facilities in southern Spain and Morocco can catch dust particles even before they reach the mirrors. Project partners are also adapting hydrophobic coatings, so that any dust that makes it past the barriers is deterred from adhering to the mirror surface.

Preventing dust from sticking to CSP mirrors would mean less water would be wasted on washing them. Image credit: ‘Plataforma Solar de Almería – Vista aérea’ by Psaciemat is licensed under CC BY-SA 3.0

By combining smart cooling and cleaning measures, WASCOP and MinWaterCSP aim to reduce the water footprint of concentrated solar plants by more than 70 % over the coming years.

Professor Armando Oliveira at the University of Porto in Portugal sees concentrated solar as a potential game changer in the struggle against both climate change and energy poverty.

As coordinator of the EU-funded REELCOOP project, he has been checking the numbers on decentralised energy generation through test sites that combine CSP with other technologies, in order to assess the potential of renewable energy installations in the field.

For example, a CSP plant in Morocco has a back-up system that burns biomass when it is cloudy, so that electricity can be generated around the clock. And a gasification unit will soon be turning agricultural waste into gas to power a similar CSP-biomass hybrid system installed at the National Engineering School in Tunisia.

‘Synergies between biomass and concentrated solar make it possible to rapidly substitute one heat source for another,’ explained Prof. Oliveira. ‘This grants valuable flexibility in terms of generating electricity even when the sun does not shine.’

Prof. Oliveira is confident that the decentralised systems tested in REELCOOP can produce electricity at any time of day for prices below 20 cents per kilowatt hour – a level that is lower than utility rates in many emerging and established markets today.

By 2020, a fifth of the EU’s energy is set to come from renewable sources, a commitment laid out in 2009’s renewable energy directive.

This includes sources such as wind, solar, hydro, tidal, geothermal and biomass.

The idea is to reduce reliance on fossil fuels and cut greenhouse gas emissions in an effort to keep global temperatures within 2 % of pre-industrial levels, as agreed at the COP21 climate conference in Paris in 2015.