A proven energy technology with a 30-year track record, concentrating solar power is a promising clean electricity source ripe for development in the United States and the world.

Concentrating solar power is a simple technology in principle: It requires reflecting very large amounts of sunlight onto a very small area, creating heat that can be converted into electricity. Indeed, those who took survival-training class, whether in the boy scouts or elsewhere, may remember learning how a simple magnifying glass can be used to concentrate the sun’s rays to start a fire. In ancient Greece, historical accounts hold that the Greek army, under instruction from Archimedes, used large oblong mirrors to reflect the sun’s rays to set ablaze invading Roman sea vessels in 212 B.C.

The first commercial-scale application of this technology was the Solar Energy Generating System, or SEGS, which was built in California in the 1980s. SEGS continues to operate under new ownership, and today contains more than 900,000 parabolic trough-style mirrors at nine separate sites in Southern California and accounts for 310 megawatts, or MW, of installed generating capacity—enough to power nearly a quarter of a million homes at peak production.

Concentrating solar power, unlike standard solar photovoltaic technology, stores heat rather than electricity, making storage using CSP technology potentially much cheaper and more effective than solar photovoltaic, or PV, technology. This storage capacity allows CSP power plants to generate baseload power, which is the minimum power that a utility must supply to its customers to meet demand at a given time.5 Since concentrating solar power can support the nation’s electricity grid during all hours of the day, it is able to compete on par with natural gas and other traditional fossil-fuel sources of energy, without the need for expensive
battery systems. Many other forms of clean energy production do not have this capability, making the electricity generated less valuable and harder to utilize for grid operators.
Additionally, concentrating solar power uses relatively cheap, plentiful building materials; creates more jobs per megawatt than any conventional fossil-fuel based technology; and already delivers low-cost electricity to homes across the world.
Concentrating solar power is experiencing a resurgence domestically. The Solana CSP plant in Arizona and the Ivanpah CSP facilities in Southern California, when completed this year, will be two of the largest CSP facilities in the world. 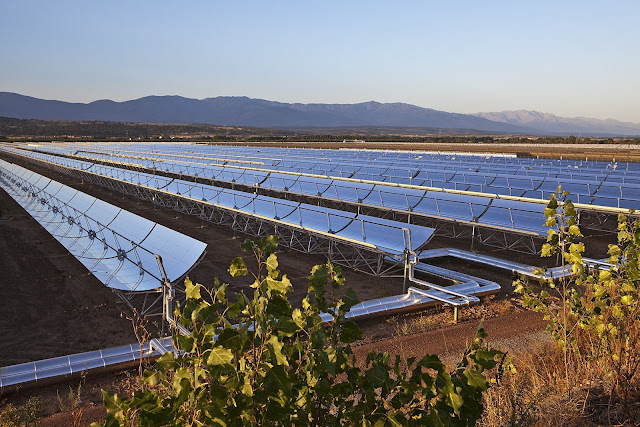 They will provide more than 500 megawatts of power, or enough to power more than 150,000 homes. These facilities function by using the sun’s concentrated rays to heat fluid to more than 700 degrees Fahrenheit and exploiting that stored heat to power steam turbines.9 Together, these two plants will provide more than 4,000 union construction jobs and more than 160 permanent operation and maintenance jobs in Arizona and California.

Developers in the European Union are already looking to build 20 gigawatts, or GW, of concentrating solar power in North Africa by 2020. To realize the same kind of innovation and growth in the United States, however, the White House’s 2013 energy agenda will have to address many regulatory and market-based obstacles that are holding concentrating solar power back from its full potential.

Concentrating solar power is not a new or experimental technology. The first CSP plants were built in California in the 1980s and continue to produce electricity today.

The American Recovery and Reinvestment Act of 2009 provided a bundle of incentives that stimulated the U.S. solar industry and excited its business leaders.

In fact, The Economist and The New York Times both published articles or reports on solar technology’s revival in the summer of 2009.


In 2010 U.S. cumulative CSP capacity from its 17 operating CSP plants reached 507 MW.16 In 2011 the Department of Energy announced $3.35 billion in loan guarantees for four different projects, adding more stimulus to the U.S. CSP industry.
The total worldwide wattage produced by CSP has reached 2.5 GW. Plants currently under construction will generate an additional 2 GW, and all plants that are currently in the pipeline at any stage of development will add between 10 GW and 16 GW—the equivalent of more than 30 typical 500 MW gas-fired power plants when complete in the next few years.

Measured by installed capacity, Spain continues to lead the world CSP market; its installed CSP-generating capacity totaled 1,042 MW in 2012, compared to 509 MW in the United States that year. But Spain recently suspended all of its renewable-energy incentives by royal decree in an effort to cut government costs.

Meanwhile, the U.S. CSP industry continues to grow. In Arizona alone, more than 1 GW of CSP is either operating, under construction, or planned.

In this year’s State of the Union address, President Obama challenged the country to double the deployment of renewable-energy technologies by 2020.23 Because concentrating solar power lacks supply-chain bottlenecks and doesn’t require expensive material inputs—see below—it has the potential to grow exponentially in the world’s sunny regions over the coming decades.

Conditions are ripe for the United States to take the lead in the already-global and growing CSP market.

Concentrating solar power can be used for baseload power

Concentrating solar power has many advantages over other clean energy technologies because it can generate electricity around the clock. By storing excess heat energy during the day and releasing it overnight or during periods of cloudy weather, concentrating solar power can generate stable baseload power 24 hours a day. Storing heat energy is 20 to 100 times more cost-effective than battery storage of electricity, with energy-conversion efficiencies already exceeding 90 percent.

Whenever sunlight falls below the necessary level to run the facility, the on-site natural-gas turbine can come online and, within a few minutes, account for the difference, ensuring that the plant can operate with market-expected levels of reliability in any weather condition.

Unlike solar photovoltaics, which require large amounts of scarce materials such as silicon, copper indium selenide, or cadmium telluride, CSP plants are made from low-cost and durable materials such as steel and glass. In 2005, for example, a global scarcity of silicon caused supply-chain bottlenecks in solar-cell manufacture and drove up the prices of panels considerably.28 CSP plants, however, when built at scale, are inexpensive and less susceptible to supply chain bottlenecks than are rare earth mineral-dependent photovoltaic power cells. 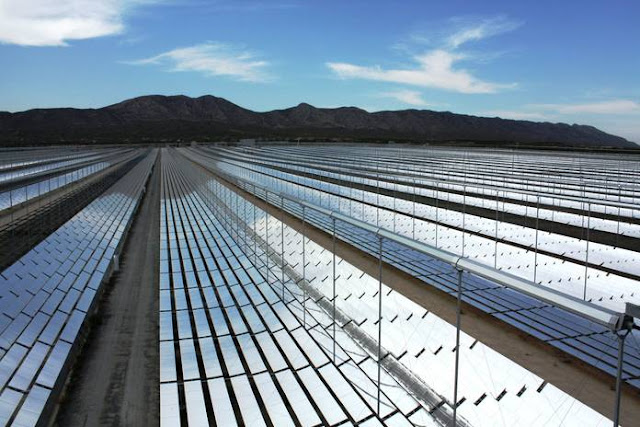 Furthermore, concentrating solar power uses less land per megawatt than any other form of renewable energy,30 generating 1.5 to 3 times more power per acre than solar photovoltaic technology.
According to a report by the National Renewable Energy Laboratory, CSP plants actually use about the same amount of land as fossil-fuel-based generation “because fossil fuel plants use additional land for mining and exploration as well as road building to reach the mines.”

CSP plants are more capital intensive than traditional fossil-fuel plants; their installation is quick but expensive. Once online, however, CSP plant operating costs are extremely low since sunshine is free. Investments in CSP plants therefore produce higher economic benefits in terms of jobs created per unit of built capacity than conventional electricity-generation technologies. 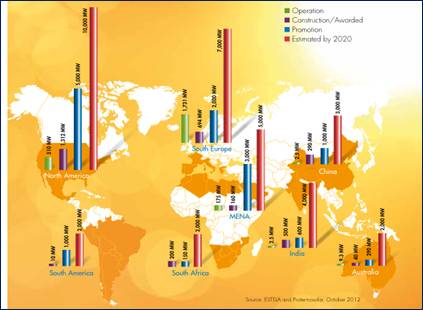 If current trends continue, the price of concentrating solar power will plummet in the coming decade. Meanwhile, the cost of building and operating a conventional fossil-fuel-based power plant has more than doubled over the past 10 years and is projected to rise even further, as increasing global demand drives up the price of the limited supplies of fossil fuels.42 This is one reason why investments in concentrating solar power are already outpacing investments in carbon-capture technology.

Even by 2030, when many hope that the market for carbon capture and storage technology will have become widespread, it will still be roughly twice as expensive per metric ton of carbon avoided than concentrating solar power. This means that as we begin to internalize the costs of carbon pollution, CSP plants will emerge as more profitable and less expensive than coal with CCS technology. According to the Global CSP Outlook 2009, concentrating solar power could meet up to 7 percent of the world’s projected electricity needs in 2030, rising to 25 percent by 2050.