The first CSP power plant in the region is under construction in Mexico, a hybrid solar/gas plant with a solar generating capacity of 14 MW. In Chile, the government has released a competitive tender for CSP power, ant

The first CSP power plant in the region is under construction in Mexico, a hybrid solar/gas plant with a solar generating capacity of 14 MW.42 In Chile, the government has released a competitive tender for CSP power, anticipated to be in the range of 50 to 100 MW, offering a public subsidy and access to concessional finance and grants.

Solar photovoltaics (PV) and concentrating solar power (CSP), geothermal, wave, wind and biomass sources in this region could produce up to 80 petawatt-hours of electricity. Lower prices and new technologies are making solar power, wind energy and other resources competitive with fossil fuels for power generation.
Latin America and the Caribbean’s renewable energy endowment is large enough to cover its projected 2050 electricity needs 22 times over, according to a new report commissioned by the Inter-American Development Bank (IDB).
Solar, geothermal, wave, wind and biomass sources in this region could produce up to 80 petawatt-hour of electricity.
One petawatt-hour is equivalent to 1 trillion kilowatt-hour, roughly 3 times the amount of electricity Mexico consumes in one year. At present, Latin America generates 1.3 petawatt hour. By 2050, demand is expected to grow to between 2.5 to 3.5 petawatt- hour.
The report addresses a series of myths surrounding renewable energies, noting that several of these alternative technologies have become price competitive with conventional technologies, offer good investment opportunities and should be taken into consideration by policymakers aiming to diversify their national energy matrixes, reduce fuel supply vulnerabilities and cut greenhouse gas emissions.
“Though Latin America uses more renewable energy than any other region in the world, it faces difficult choices as it seeks to generate the electricityit needs to grow without harming the environment,” said IDB President Luis Alberto Moreno. “Renewables are becoming a viable and attractive option that needs to be explored.”
The report will be presented on June 18 in Bogotá at the Global Green Growth Forum Latin America and the Caribbean (3GF LAC)
to leaders from government, business, finance, civil society and international organizations gathered at the invitation of Colombian President Juan Manuel Santos, Danish Prime Minister Helle Thorning-Schmidt, and Moreno.
“With this study we seek to promote concrete action and public-private partnerships, by putting into perspective the magnitude of available renewable sources, outlining their broaded benefits and illustrating policy options,” said Walter Vergara, head of the IDB’s Climate Change Division
and lead author of the report. 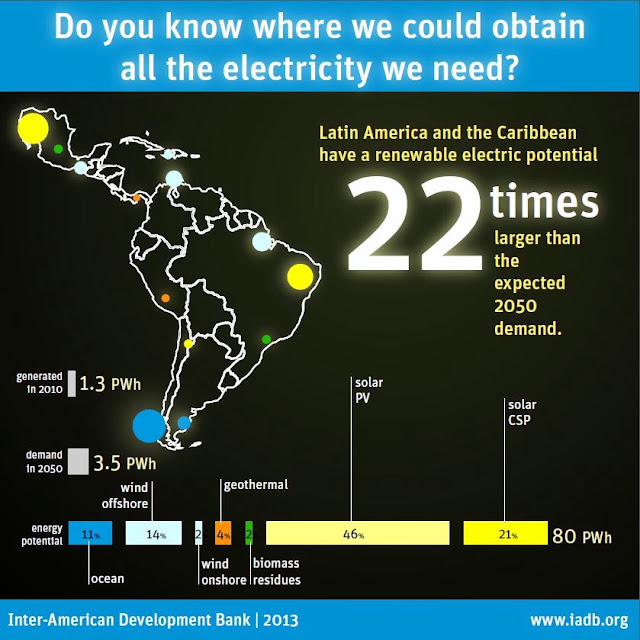 In 2012, global investments in alternative renewable technologies (solar, wind, geothermal, ocean, small-scale hydropower and advanced bio-energy) and traditional hydropower amounted to $244 billion, of which Latin America represented a modest 5.4 percent. To tap into its vast potential, the region must modernize its policy and regulatory frameworks and scale up investments.
While investments in renewable energy have been limited so far, the study argues that major new developments are underway in Latin America. Wind is the fastest growing non-traditional renewable source in the region. Mexico is the fifth largest producer of geothermal energy in the world and Colombia, Panama and Ecuador are exploring their own resources. Biomass, solar and wind are increasingly being used in Brazil, Mexico, Guatemala, Argentina and Chile.
The study concludes that, regardless how each country may shape its energy policy, increasing the penetration and use of non-traditional renewables makes sense for Latin America and the Caribbean.