There has been some comments aired that the proposed Concentrating Solar Thermal (CST) with storage power generating plants do not replace the recently closed Northern Power Station.

It has never been intended that the initially single 110 MW plant proposed by Solar Reserve was going to literally replace the quantum of energy output from Northern Power station, but more a step towards it.

We see it as the first step for Port Augusta to regain the proud history of power generation from here that was first envisioned, and acted upon in the 1940s by Sir Thomas Playford, the longest serving Premier of South Australia.

That 110 MW plant was hoped to be the first, not the only one, in Port Augusta.

Already now we have another firm proposal for Port Augusta for another CST plant, proposed by Solastor in its recent launch. 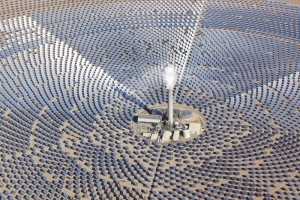 It is the position of our Repower Port Augusta community group we would like to see both of these facilities built, we are not in an appropriate position to judge the somewhat different technologies involved.

Our interest is that CST plants are built, perform well, are well built, constructed with minimum necessary delay, and we care also about regional and local job creation.

Oh, and of course we understand the need to transition away from fossil fuels as a key part of the emission reduction needed to mitigate the worst effects of climate change.

But we all get that now, don’t we.

Anyway to the numbers.

We see this energy delivery on our household bills measured in kilowatt hours (kWh).

One thousand kWh equals one MWh.

That by the way is around twice the state average.

Below I have listed the peak capacity, the annual energy delivery, and ongoing job numbers of both CST proposals on the table for Port Augusta, and for other Renewable Energy proposals mooted for this area.

Our Repower Port Augusta Alliance has always liked CST, because of the storage feature that allows generation when you want it, (within some limits), allowing it to balance out the gaps in supply and demand, and helping to regulate voltage and frequency, along with the greater number of good jobs involved in construction, operating and maintenance of this type of plant.

It is well past time CST should have started to take up its place in the energy supply mix of Australia, beginning around Port Augusta.

Northern Power Station has delivered between 2 million and 3 million MWh in each of the last five years, but was capable of delivering over 4 million MWh per year at peak capacity of 544 MW in its later life.

Of course over part of the life of Northern Power Station, Playford Power Station also made a contribution, and for the real number enthusiasts, the peak total Port Augusta annual generated energy was also in 2006/07 and was 5,188,000 MWh.

As the numbers are large, and the zero’s tiresome, these numbers are often expressed in Gigawatt hours (GWh), for example the total annual energy delivery potential from all the renewable energy projects listed above is 3,708 GWh.

It is also worth noting that the Renewable Energy Target (RET) requires something like 6000 MW of capacity to be built between now and 2020.

The above 1095 MW is around 18 per cent of that requirement.

Sounds reasonable to me, and it will take most of the available time to achieve all these listed projects.

At the time of the closure announcement, there were around 190 people employed at Augusta Power Stations.

That does not include the 230 jobs in Leigh Creek for fuel extraction and delivery.

I know all my former colleagues understand all these numbers but I also know they are critical when these things are represented, so I thought a wider dissemination of this information worthwhile.

These numbers I hope put things in perspective, and importantly allow our community to see that there is indeed potential for both the Port Augusta based energy generation, and jobs, to be replaced by the aggregate of the renewal energy projects on the table.

There can of course be further renewable energy projects including further CST added in the future, it does not need to stop at the projects already put forward.

Adding these to the existing Sundrop Farms brilliant initiative, the vision of Port Augusta as the Renewable Energy hub for Australia is no fanciful dream.