According to Kevin Smith, the CEO of SolarReserve; the company that is first to sell CSP at 6 cents/kWh, the record-low CSP price was largely due to their receiver and heliostat research. The 150 MW Aurora CSP project will sell power day or night to the South Australian Government at this price due to ongoing research into CSP cost-cutting conducted at Sandia Laboratories in the US.

“The biggest part of getting our costs down has been the reduced production and capital costs due to more efficient designs in the heliostats,” Smith told SolarPACES. “That really comes down to more advanced designs, lower costs and even some better efficiency in the heliostat field overall. Improvements in pointing accuracy and thinner glass, more efficient drives, all of those things.”

CSP defied odds to come down in price this fast

There are only two ways to bring costs down in novel technologies. One is through the efficiencies of mass production with maturing supply chains as more gets deployed. The other is through research. Solar PV (photovoltaic) benefitted from both. Research helped lower its costs, but also mass production enabled mass adoption which enabled efficiencies of scale in making solar panels.

But CSP (concentrated solar power) – also known as solar thermal energy: STE – doesn’t lend itself to mass-market adoption by consumers. Homeowners cannot install a solar thermal energy plant on top of their roof like a PV array. CSP plants have to be utility-scale.This means much less has been built. So the cost reduction is slower.

In 2008, the first CSP project with thermal energy storage; Abengoa’s 150 MW Andasol, began shipping its day or night solar power at 31 cents/kWh. Now, 8 years later, after only 5 gigawatts of CSP plants being built – and many not even including storage – we see CSP with storage at just 6 cents/kWh. So how was this plummeting cost possible in just 8 years and through less than 5 GW of capacity?

Research. In this case; mostly focused on the tower receiver and the heliostat field – the solar collectors that harvest sunshine to make energy. 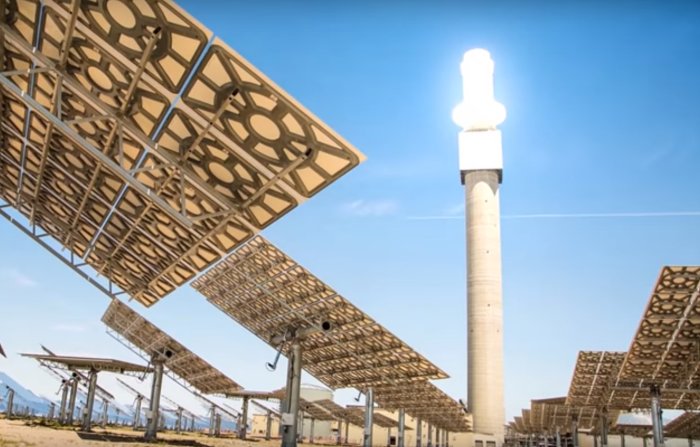 Heliostats are the mirrors that reflect and focus light onto the receiver at the top of the tower in tower CSP.

SolarReserve’s much-patented technology grew from the work of rocket scientists – literally; so innovation has long been their trademark. But with political delays in South Africa affecting all recent renewable project contract finalizing (including SolarReserve’s Redstone CSP project with ACWA), the firm has only its initial CSP project actually on line so far; the 110 MW Crescent Dunes CSP with 10 hours of storage supplying Las Vegas nightlife. But that contract signed in 2009 was at 13.5 cents/kWh – twice this price.

So without new deployment in the interim, you might wonder: how can they test that any new design modification will work in the real world?

“We fabricate prototype heliostat designs and then we actually can operate them out at Sandia labs in New Mexico where we utilize their testing facilities,” Smith explained. “They have all kinds of different testing that goes on out there – we’ve participated in a significant amount of heliostat testing at Sandia. We take full-scale prototype designs that we assemble, and we test them in the field there, and revise the designs and go through the testing again.”

“We are really looking at dozens of areas to increase efficiency in CSP, as is the industry generally,” he added. “It includes heliostat designs that are lighter, lighter steel, thinner glass, more efficient heliostat drives that use less power, drives that are cheaper, and more accurate but lighter components; there are also issues on heliostat foundation design. So these are the things that we are looking at – and the industry is looking at – for how to make the systems more efficient and more cost-effective.”

Fortunately, access to the US national laboratories for new technology testing is not going to be prevented in the Trump era. That’s because the testing is set up to be self funding. Companies wishing to use the testing facilities at Sandia must pay the lab.

“We pay a fee to utilize their US national testing labs,” he said. “In this case it is our own R&D budgets for new designs and then we pay the US government basically to use their facilities to try them out.”

Prices for CSP have not come down as low as PV which at utility-scale is as low as 3 cents/kWh in 2017. PV prices came down fast because PV is a simple and easily mass-produced way to make electricity.

By contrast, CSP is more expensive – at least compared to stand-alone PV (with no storage: Comparing both with storage: CSP is cheaper than PV with batteries.)

But CSP prices have been coming down too. Still; CSP with thermal energy storage at just 6 cents/kWh is a shocker. The most recent CSP bids in Dubai made news for being bid in the 9 cents range in May of 2017. So CSP at 6 cents in an actual signed contract just three months later is very big news.

So it is all the more peculiar that when the news broke in August of the award of the contract to supply the South Australian Government with solar thermal energy from SolarReserve’s 150 MW Aurora project, every story focused on the idea that it was the biggest such project.

Only two news sites, Greentechmedia and – ahem: ours pointed out the much bigger news – the astounding price.

The arrangement is not a straightforward contract at a set price – like the more typical renewable energy PPA (power purchase agreement) with an electric utility, but is more convoluted, because Australia has a merchant trading market. The details are in our interview with the innovative designer of the win-win-win contract for the South Australian Government.