Rioglass Solar, leading manufacturer of HCE receivers and mirrors used for Solar Thermal Energy (STE) and Concentrated Photovoltaic (CPV) technologies, has signed an agreement with Schott Solar CSP GmbH (Schott Solar), for the acquisition of its receiver business, including the company in Spain and the assets in Germany.
Jose M. Villanueva, Chairman of Rioglass Solar Holding, said “by combining the technology and expertise of both Rioglass Solar and Schott Solar, this transaction will propel us forward, enabling Rioglass Solar to meet customer demands across the industry and prepare the group for the next phases in the rapidly evolving and intensely competitive STE (also referred to as CSP) and CPV businesses. As such, it reemphasizes Rioglass Solar’s commitment to supporting its customers worldwide”.
The execution of the transaction is subject to regulatory approval and satisfaction of other customary conditions. 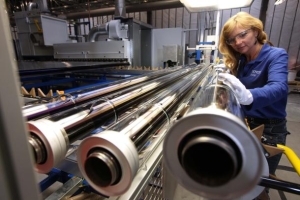 The transaction enables Rioglass Solar to deliver a more competitive technology in the STE (CSP) and CPV industries, enhancing its offering with two of the main components of STE and CPV plants, as well as solutions for the different types of technologies used in this industry such as Parabolic Trough technology, Central Receiver, Dish Stirling, Linear Fresnel, CPV, and industrial applications of concentrating technologies.
Founded in 2007, Rioglass Solar has a leading position as HCE receiver and mirror supplier, with cutting edge production facilities in Spain, the United States, Israel, South Africa, Chile and China. Rioglass Solar has supplied more than seven million mirrors worldwide for Solar Thermal Energy (STE) and Concentrated Photovoltaic (CPV) technologies. Rioglass Solar was the first company to introduce to the market, among other products, tempered parabolic mirrors, HCE receivers of bigger diameter for large aperture troughs, and composite heliostat facets for tower plants.