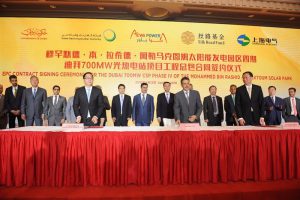 “I am pleased to be here today in Shanghai for the signing of the engineering, procurement and construction (EPC) contract for the 700MW fourth phase of the Mohammed bin Rashid Al Maktoum Solar Park, the largest Concentrated Solar Power (CSP) investment project in the world. We are here today to show the strong ties between our two great nations, which have been formed because of our shared values and our trading and economic interests. Bilateral trade between the United Arab Emirates and the People’s Republic of China has already exceeded USD35 billion in the first nine months of 2017,” said Al Tayer in his speech during the signing ceremony.

“Last month, His Highness Sheikh Mohammed bin Rashid Al Maktoum gave the go-ahead to commence the fourth phase of the Mohammed bin Rashid Al Maktoum Solar Park, the largest single-site solar park in the world, based on the Independent Power Producer model. This marks considerable progress in our efforts to achieve the objective of the Dubai Clean Energy Strategy 2050 to provide 75% of Dubai’s total power output from clean sources by 2050. This will transform the Emirate into a global hub for clean energy and green economy; and support its objective of becoming the city with the lowest carbon footprint in the world,” he added.

“With a planned capacity of 5,000MW by 2030, and a total investment of USD13.6 billion (AED 50 billion), the Mohammed bin Rashid Al Maktoum Solar Park seeks to accelerate our diversification into clean energy. It is a key pillar in our strategy, considering that our ambitious targets require at least 42,000 MW of renewable energy by 2050.”

“I would like to use this opportunity to thank everyone, especially our partners in the consortium, comprising Saudi Arabia’s ACWA Power and the Silk Road Fund, and China’s Shanghai Electric as main contractor, for all their work on the fourth phase of the solar park.”

“This project will feature the world’s tallest solar tower, measuring 260 metres, and the world’s largest thermal energy storage capacity. It will provide clean energy to over 270,000 residences in Dubai, reducing 1.4 million tonnes of carbon emissions a year. The CSP project will use two technologies to generate clean energy: the 600MW parabolic basin complex and the 100MW solar tower, which will cover 43 square kilometres. This project, which involves an investment of USD3.9 billion (AED14.2 billion), has achieved the world’s lowest Levelised Cost of Electricity (LCOE) of USD7.3 cents per kilowatt hour (kW/h) for Concentrated Solar Power.”

“In Dubai, we welcome every opportunity to share experiences and best practices to help achieve this goal, and further strengthen our ties. Let us show the world today that the United Arab Emirates and China are committed partners in clean energy so that the planet continues to work to achieve a brighter, sustainable future for generations to come,” concluded Al Tayer.