“SNL has been building and using supercritical CO2 loops for about a decade,” said Paul Gauche, Concentrating Solar Power (CSP) program manager. “There are several supercritical CO2 loops at the Brayton Laboratory, including one of the first three ever built, which are used for customer testing and research.” These loops demonstrated the first near-critical sCO2 compression, recompression Brayton cycle power generation, and trans-critical and mixed gas cycle variations, Gauche said.

In FY15, Sandia applied to the U.S. Department of Energy’s Solar Energy Technologies Office to fund a SunShot National Laboratory Multiyear Partnership (SuNLaMP) project in FY16-18. The goal of the project—a precursor to the much larger Generation 3 Particle Pilot Plant (G3P3) CSP project—was to build a falling particle receiver system with an integrated sCO2 loop to demonstrate the ability to heat sCO2 using particles heated by concentrated sunlight to temperatures above 700°C.

Dr Cliff Ho, Senior Scientist, is the Principal Investigator leading these projects. According to the researcher, this first test of the integrated test system will include the following components:

Although Sandia houses a megawatt-scale sCO2 loop, the loop that will be used for the SuNLaMP project is 150 kW to fit within the envelope of the NSTTF elevator and accommodate operation above 700°C. Ground-based testing of this system with electrical heating has exceeded 500 hours, surpassing any other loop of its size.

“The integrated system is unique because it heats the particles up to ~800°C using concentrated sunlight and then transfers that heat to a working fluid through a primary heat exchanger,” said Ho. “The heat exchanger is the world’s first to transfer heat from particles in a moving packed bed to supercritical carbon dioxide at design temperatures and pressures greater than 700°C and 20 MPa.”

Ultimately, the high-temperature sCO2 can be used in next-generation, high-efficiency sCO2 closed-loop Brayton cycles being pursued by DOE to decrease the cost to produce electricity.

“This is a ground-breaking experiment where we plan to use concentrated sunlight to transfer heat from falling particles in the receiver and into the supercritical CO2 loop,” Gauche said. 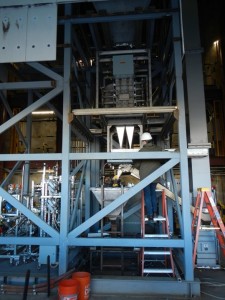 The NSTTF is also incorporating work from its Gen 3 projects by testing falling particle receiver and sCO2 loop control improvements.

Activities for SuNLaMP and the Gen 3 projects will continue through 2020, with the on-sun test campaign running through the summer.

To learn more about the SuNLaMP project and G3P3, visit Gen 3 Particle-Pilot-Plant.