Saudi Arabia has launched an ambitious project that will develop a first-of-a-kind efficient coupling of concentrated solar power and desalination techniques. 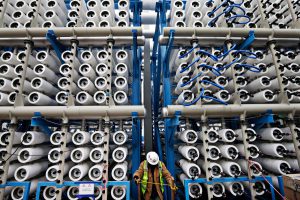 The “DESOLINATION” project is planned to last four years to 2025.

As well as building the combined plant itself, the project includes plans to develop cutting-edge technology for solar power generation and desalination.

The aim is to use the most efficient possible technology for both applications in the finished plant.

Coupling the two technologies together in one plant will also demonstrate the benefits of combining desalination with solar power generation.

The plant will be built at the King Saud University in Riyadh, Saudi Arabia. When complete, it will generate low-cost renewable energy as well as low-cost freshwater, meeting Saudi Arabia’s need for efficient and accessible energy and water resources.

In press releases concerning the new project, it is claimed that the plant will be able to provide renewable electricity for less than €100 per megawatt-hour, and freshwater for less than €0.90 per cubic meter.

As well as meeting the country’s need for accessible energy and freshwater, the project will also address sustainability concerns. It is slated to deliver a 30% reduction in CO2 emissions compared to traditional desalination systems using forward osmosis.

Advancing solar power technology is a key aim of this project. At the forefront of this innovative workstream, carbon dioxide blends will be explored to improve the overall efficiency of solar power.

By blending CO2 with small quantities of doping agents, inorganic compounds, and fluorocarbons, the CO2 critical point can be increased. This in turn allows for condensed steam CO2 cycling in solar power generation, resulting in a more efficient and less expensive solar power technology.

This is because condensed steam CO2 cycles have a higher conversion efficiency compared to conventional steam CO2. This improved efficiency is predicted to enable electricity production for around €96 per megawatt-hour.

The project intends to progress desalination technology by developing the forward osmosis technique for purifying water.

Forward osmosis capitalizes on the natural phenomenon of osmosis, where plants and trees take up water from the soil. This is a low-energy process that occurs in nature.

The project’s 19 partners are based in nine EU (European Union) countries and three GCC (Gulf Cooperation Council) councils. A total of 13 universities are working alongside six technology firms to deliver the project.

Everybody involved is invested in establishing a high-level technology demonstrator that could be replicated in other parts of the world.