The Solar Platform of Almería (PSA) is the most important research center in the world in solar thermal concentration technologies, leading international projects and initiatives promoted and supported by the European Union. 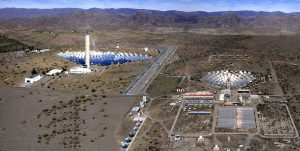 The PSA is cataloged in Spain as a Singular Scientific and Technical Infrastructure (ICTS) and at European level it is recognized as Large Scientific Installation by the European Commission, however the standards imposed by the Government, different from those existing in the R & I sector in Spain (Universities and CSIC), prevent the development of successful research projects.

The regulations imposed by the Government to the Public Research Bodies since January 2016 are irreversibly damaging the excellent reputation of the PSA, a reputation that it has held since its inception more than 30 years ago. These rules prevent the proper management of a large scientific and technological facility such as the PSA, which manages high-budget international projects and financed with funds outside the General State Budget (PGE).

This situation not only makes it impossible to participate in new research projects, but also prevents the successful development of ongoing projects, even reaching the serious situation of having to return the funds granted by the European Commission, in some cases with interest.

It is not a problem of liquidity, or lack of funds, since the PSA given its scientific and technical quality, has been able to get funds in highly competitive international R & D calls, but to the prohibition of spending these funds. From August 2016 to June 2017, the PSA has not been able to acquire any equipment. The Order HAP / 1169/2016 of July 14, given by the Spanish Government with the argument of reducing the public deficit, prevented the acquisition of material in the PSA, which has no justification as the funds received from the European Commission they do not affect the Spanish public deficit. Not only will this investment be lost in Spain, but also jobs, prestige and credibility for financing new research projects.

This problem is getting worse every day with the imposition of increasingly restrictive norms. The serious situation continues despite the fact that the PSA has repeatedly reported on it using all official channels at its disposal.

The regulations imposed by the Government must be changed urgently as they are causing irreparable damage to the R & D activity of the PSA. Transparency and control should allow the development of research projects financed by the European Union that contribute to development, wealth and job creation. This last point is amply demonstrated by projects carried out in the PSA when the management standards were different from the current ones.

The current Government of Spain will prevent the incorporation in early 2018 of 40% of the jobs associated with temporary research staff of the center, despite the fact that the PSA has the necessary budget to do so. This situation condemns the PSA to its disappearance as an international benchmark at the scientific level, and to the loss of competitiveness in order to continue being successful in international public R & D calls that allow us to continue creating development, employment and wealth.

Sign this petition to demand that the Ministry of Economy, Industry and Competitiveness change all the rules that are necessary so that the PSA can carry out its R & D tasks with full guarantee.
This request will be delivered to: