Rhone Resch, president and CEO of the Solar Energy Industries Association (SEIA), and Shannon Eddy, executive director of the Large-scale Solar Association (LSA), released the following statement today in response to the Department of the Interior’s record of decision on the  Programmatic Environmental Impact Statement (PEIS) for Solar Energy Development on Public Lands:

“We thank the Department of the Interior and the Department of Energy for finalizing the process for solar energy development on public lands. We hope that this decision results in a permitting process that brings more solar online to serve the American people,” said Rhone Resch, president and CEO of SEIA.

“The U.S. Southwest is home to some of the best solar resources in the world. It’s a region universally-recognized for its ability to enhance our energy security. The Administration set a goal to permit 10 gigawatts of additional renewable energy projects on public lands by the end of this year. The U.S. solar industry is ready to meet that challenge. Major solar projects are under construction in the Southwest right now, increasing and diversifying our domestic energy supply, while delivering clean power and creating jobs.

“The PEIS identifies a process that has the potential to accommodate well-sited solar power plants outside of designated Solar Energy Zones and protects the rights of pending solar applications. The Bureau of Land Management must ensure pending projects do not get bogged down in more bureaucratic processes,” added Resch.

“Balancing the growing demand for domestically-produced solar energy with conservation objectives is not an easy task. We are appreciative of the Departments’ efforts to gather input from all stakeholders. We look forward to working with them to refine the process for permitting solar power plants and transmission in the West, with the hope that new solar projects will move forward in the near future,” said Shannon Eddy, executive director of LSA.

The U.S. solar energy industry employs 100,000 Americans at more than 5,600 companies, mostly small businesses, across all 50 states. The industry more than doubled the amount of solar installed in the U.S. in the second quarter of this year compared to 2011, and growth is expected to continue in the second half of 2012. More than 400 utility-scale solar projects larger than one megawatt are currently under construction in the U.S. 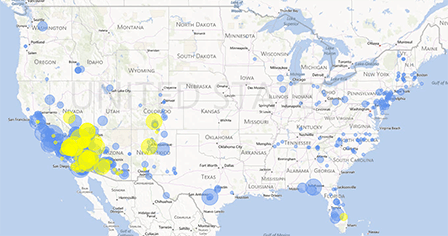 Solar on the Ground

See the locations of the major solar systems identified by this research on our interactive map.

This list is for informational purposes only, reflecting projects and completed milestones in the public domain. The information in this list was gathered from public announcements of solar projects in the form of company press releases, news releases, and, in some cases, conversations with individual developers. It is not a comprehensive list of all utility-scale solar projects under development. This list may be missing smaller projects that are not publicly announced. Particularly, some smaller projects located outside of California that were built on a short time-scale may be missing from this list.

This list includes ground-mounted utility-scale solar power plants larger than 1 MW that directly feed into the transmission grid. This list does not include large “behind the meter” projects that only serve on-site load. One exception to this is large projects on military bases that only serve the base.

SEIA does not guarantee that every identified project will be built. Like any other industry, market conditions may impact project economics and timelines. SEIA will remove a project if it is publicly announced that it has been cancelled.

Solar projects proposed on public lands overseen by the federal government must complete a full Environmental Impact Statement before being issued a construction permit by the U.S. Department of the Interior. This review process, which takes as long as four years to complete, involves coordinated analyses by federal, state and local stakeholders to identify the potential impacts of a proposed project.

SEIA® is the national trade association of the U.S. solar energy industry. Through advocacy and education, SEIA® is working to build a strong solar industry to power America. As the voice of the industry, SEIA® works with its 1,000 member companies to make solar a mainstream and significant energy source by expanding markets, removing market barriers, strengthening the industry and educating the public on the benefits of solar energy. www.seia.org

LSA is the trade association for the utility-scale solar industry and represents the nation’s largest developers and providers of utility-scale solar generation resources. Collectively, LSA’s members have contracted to provide more than seven gigawatts of clean, sustainable solar power under contract to California’s load-serving entities. LSA members develop, own and operate various types of utility-scale solar technologies, including photovoltaic and solar thermal system designs. LSA companies are leaders in the utility-scale solar industry and share a common understanding of, and concern about, the issues facing development of the solar industry. They are actively developing technology and strengthening markets to facilitate significant penetration of renewable energy into the western United States power sector, as well as other states, and regional and federal venues, when appropriate. www.largescalesolar.org