Shanghai Electric («Shanghai Electric» or «the Company») (601727.SS and 02727.HK) announced that the first molten salt tank hydro test for the Parabolic Trough Plant-II (PT2) of the fourth phase of Mohammed bin Rashid Al Maktoum Solar Park was carried out on May 9, the positive results of which laid a crucial foundation for the next phase of the molten salt system commission. The test was followed by finalized molten salt pipeline installation inside the Concentrated Solar Power (CSP) tower, marking another key milestone in construction progress. 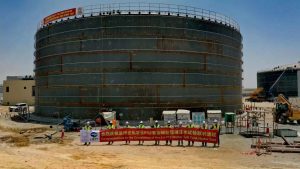 The solar tower, standing 260m-high at the center of the CSP tower plant site, will also be the world’s tallest structure of its kind. Upon completion, the combined thermal energy storage of the solar tower and parabolic trough plants will allow for 24/7 energy availability, with each parabolic trough CSP plant possessing an energy storage capacity of 13.5 hours and the tower boasting up to 15 hours.

Nitrate, the heat storage medium for the Parabolic Trough Plant-II, is stored in eight tanks, with each one measuring 45 meters in diameter and 25,000 cubic meters in capacity. The harsh desert environment presented a massive challenge to the test, and labor shortages during Ramadan added another layer of uncertainty to overall progress. The test was eventually completed on time with the help of water trucks which transported and unloaded the water to provisional water tanks, through which the water was pumped into the molten salt tanks.

«I extend my appreciation to all the on-site workers for their dedication and hard work to ensure the test was completed at speed and on time, despite the tremendous difficulties caused by a labor shortage and local high-temperatures,» said Zhao Hui, Project Manager of Dubai CSP Project of Shanghai Electric Power Generation Engineering Co.

«Their outstanding performance also guaranteed the smooth progress of the CSP central tower pipeline installation, which is the core and one of the most important parts of the structure. The space in the tower is extremely small, given the total length of the central tower internal pipes is over 500 meters. To make sure the work could be done on time, the project team formulated well-thought-out installation plans and overcame all unseen problems without causing any delay,» he added.

The molten salt tank system is the answer to the challenges of thermal energy storage. Thermal energy storage realized by molten salt systems enables power generation on cloudy days, or long night after sunset, with high operating efficiency and low capital costs per kilowatt-hour. During the daytime, the molten salt is circulated to a heat exchanger from a cold tank to absorb heat from the high-temperature oil. The heated molten salt can then be stored in an insulated hot tank which can later send the liquid to power steam turbines at night or during unfavourable weather conditions.

In 2018, Shanghai Electric was appointed as Engineering, Procurement and Construction (EPC) contractor for the fourth phase of Mohammed bin Rashid Al Maktoum Solar Park in Dubai after signing the agreement with DEWA (Dubai Electricity and Water Authority) and ACWA Power to undertake both the 700 MW CSP and 250 MW PV projects. Financed by China’s Silk Fund and ACWA, it is a landmark project of China’s Belt and Road Initiative, as well as a significant milestone of Shanghai Electric in participating in renewable energy utility construction in the Middle East and its shift of focus from coal-fired energy to renewables.