Masdar Institute and the Massachusetts Institute of Technology (MIT) have built, tested and validated what is touted as the world’s first direct absorption molten salt receiver for concentrated solar power (CSP).

The single-tank thermal energy storage (TES) system has been operational for over two weeks at the Masdar Institute Solar Platform (MISP). The tank holds roughly four tonnes of molten salt, capable of reaching temperatures over 500 degrees Celsius. As part of the Concentrated Solar Power on Demand Demonstration (CSPonD Demo) project, it has been shown that the system can be used to produce steam for 24-hour power generation. 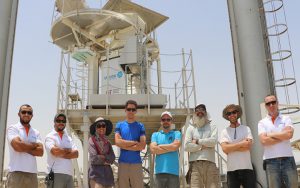 MISP chair Nicolas Calvet explains that because the CSPonD Demo uses a single tank with a thermal divider plate, instead of the traditional two-tank molten salt systems, it does not need pipes and pumps to transport the salt. “It brings the sunlight down directly to a receiver on the ground, thereby avoiding costly solar receiver tubes that undergo thermal fatigue and can bring the entire system down with the smallest of leaks.”

The Dubai Electricity and Water Authority (DEWA) said earlier this month that it has received a bid of just USD 0.0945 (EUR 0.085) per kWh in a tender for 200 MW of CSP capacity. According to Masdar, the single-tank TES technology could reduce further the cost of CSP power.