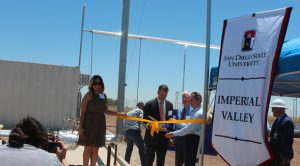 One of the projects is called the Hyperlight system, which is a concentrated solar power (CSP) technology, which uses sunlight to produce heat for industrial processes. The Hyperlight technology works in conjunction with Genifuel’s hydrothermal processing (HTP) technology. HTP converts wet organic matter — such as manure, algae, and biosolids — into renewable natural gas. HTP captures 86 percent of the energy in the waste and uses only 14 percent to process it. It also reduces greenhouse gas emissions.

Three innovative renewable energy projects, all powered by the sun and under development and trials at San Diego State University’s Sustainability Energy Center (SEC), were showcased at the Imperial Valley Campus in an event for industry experts, energy policy makers, and government and business representatives.

The projects include research that could benefit development of fuel cell vehicles, and improvements in steam production for industrial purposes.

“What we do is foster cutting-edge renewable energy research, and provide academic and professional education relevant to California’s energy future,” SEC coordinator Araceli Saucedo said. “SEC has educational and research facilities with ample room for project testing from its initial stages through its demonstration. We also offer a location for development of solar, wind and biofuel resources.»

Saucedo added that the center is working to add science laboratory space for students and research through synergistic public private partnerships.

“We know that there is no simple, single solution to the problem of climate change,” said Yuri Freedman, senior director of business development for SoCalGas. “That is why these types of partnerships, and the research that develops from them, are critical for reaching our environmental goals and keeping California at the forefront of clean energy leadership.”

Steam from the sun

Among the projects featured is San Diego-based Hyperlight Energy’s concentrated solar power technology that uses the sun to produce steam for industrial purposes. The installation features an elevated solar reflector to intensify the energy and heat transfer to water flowing through plastic tubes to produce high-temperature steam.

At SEC, Hyperlight’s steam is used with Genifuel’s hydrothermal processing technology that uses heat and pressure to convert wet waste material, such as manure, sludge or waste material, into renewable energy and gas.

Oyler said, “There are enormous amounts of materials which would otherwise degrade the environment instead of contributing clean, renewable energy.”

The three projects have all received funding from SoCalGas, the California Energy Commission, and the U.S. Department of Energy to support the commercialization of low-cost, commercial-scale renewable energy technology.