The United Arab Emirates might not seem like an obvious spot to begin and end a globe-spanning flight promoting renewable energy.

It is OPEC’s fourth biggest oil producer, after all, where gas guzzlers rule the road and the air conditioning is always on — not just at its indoor ski slope. Its oil output and fossil fuel-burning airlines are growing, and its per-capita carbon emissions rank among the world’s highest.

Yet this federation of sheikhdoms on the Persian Gulf has emerged as an unlikely champion of clean energy. One way is by backing the Solar Impulse 2 solar plane, which ended its groundbreaking round-the-world flight on Tuesday in Abu Dhabi and counts Emirati renewable-energy company Masdar among its sponsors.

Here are some others:

Dubai, the country’s cosmopolitan commercial hub, last month picked an Emirati-Spanish consortium to develop the third phase of what is slated to become the world’s biggest solar park. The winning bid for the 800-megawatt phase of the project came in at an industrywide record low cost of 2.99 U.S. cents per kilowatt-hour.

The first phase of the Mohammed bin Rashid Al Maktoum Solar Park, named after the emirate’s ruler, went online with 13 megawatts of capacity in 2013. Another 200 megawatts will be added next year. Plans call for the $14 billion park to eventually produce 5,000 megawatts by 2030, enough to power tens of thousands of homes.

Abu Dhabi’s government-backed Masdar, which was part of the winning bid, opened a 100 megawatt plant using a different technology known as concentrated solar power outside the federal capital in 2013. It aims to develop another 350-megawatt project in the emirate. 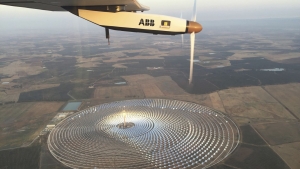 Smaller-scale projects are popping up too, including solar-powered parking meters and public Wi-Fi hotspots. DP World, which runs the Mideast’s busiest seaport in Dubai, plans to cover rooftops throughout the facility with solar panels. The emirate’s utility operator last year rolled out a plan for building owners to connect their own solar panels to the grid.

Dubai aims to generate a quarter of its power from clean-energy sources by 2030 and 75 percent by 2050. It is even looking into the feasibility of tapping geothermal energy, possibly for use in the energy-intensive desalination process the UAE uses to satisfy much of its water needs.

“Like any rational country, they’re looking ahead and … seeing it really makes sense to plan a strategy of diversification,” said economist Rachel Cleetus, the climate policy manager at the Cambridge, Massachusetts-based Union of Concerned Scientists. “They are putting a lot of money behind these investments.”

Earlier plans for Masdar City to become a self-sufficient, zero-carbon city of 40,000 serviced by futuristic electric podcars have been altered, and little has been built beyond an innovative urban core designed to keep cool using traditional Arabic architectural techniques. Still, the development has managed to attract some corporate tenants, including German engineering giant Siemens.

It also houses the global headquarters of the International Renewable Energy Agency, a 144-member organization founded in 2009. Its member countries include Israel, which sends delegates to the group’s meetings and hopes to open an office in the Emirates even though the countries have no formal diplomatic relations.

Masdar CEO Mohammed al-Ramahi acknowledged in an interview that ambitious projects such as Masdar City “take time to grow and mature,” and said the project now won’t be finished until 2030.

He insists the UAE is serious about its commitment to renewables despite a drop in oil prices that is testing the country’s finances.

“These projects bring value back to Abu Dhabi and the UAE,” he said.

Masdar has been busy developing renewable energy projects well beyond the Emirates.

It owns a 20 percent stake in Britain’s London Array, the world’s largest offshore wind farm. Another Masdar-backed wind farm is being built off England’s eastern coast.

In Spain, it teamed up with engineering company Sener to build three concentrated solar power plants. Among its projects in the Mideast are a wind farm in Jordan and a solar plant in Egypt.

Al-Ramahi said the company has invested $2.7 billion into clean-energy projects over the past decade. “All of our projects are bankable,” he said. “The financial institutions would not give you a dime if it’s not sustainable and it doesn’t make commercial sense.”

“They’re definitely showing a very strong commitment to renewable energy,” the UCS’s Cleetus said of the Emirates. “The question is can they take it further, scale it up … and at the same time diversify away from fossil fuels.”