Solar energy, wind power and other renewable energy sources were again mentioned in the second debate between U.S. President Barack Obama (D) and Presidential Candidate Mitt Romney (R), with solar power mentioned twice by Obama and once by Romney.

U.S. President Obama took credit for doubling energy production from solar, wind and biofuels, while Presidential Candidate Romney gave a nod to renewables but emphasized coal, petroleum and natural gas production and use.

Both candidates tried to position themselves as champions of greater oil and gas production.

“The most important thing we can do is to make sure we control our own energy,” stated U.S. President Obama during the debate. “But what I’ve also said is we can’t just produce traditional sources of energy; we’ve also got to look to the future.”

“That’s why we doubled fuel efficiency standards on cars. That means that in the middle of the next decade, any car you buy, you’re going to end up going twice as far on a gallon of gas. That’s why we’ve doubled clean energy production like wind and solar and biofuels.”

But while both candidates vied for the position of the greatest supporter of production of domestic natural gas and petroleum, neither the phrase “Global Warming” nor even the word “climate” were uttered once in the debate.

There was also a debate over positions on coal.  Candidate Romney noted that “You can’t build a coal plant… it is virtually impossible, given our regulations” and blamed the U.S. Environmental Protection Agency for costing jobs in the coal industry.

President Obama argued that his administration had made “the largest investment in clean coal technology”, but also noted that Romney had proudly shut down a coal plant in the state of Massachusetts when he was governor.

While President Obama can be judged on his performance while in office, for Candidate Romney we have only his record as governor of Massachusetts, his public statements, and his campaign’s statements.

And while much of the policies that supported this growth were passed on the state level, the solar industry broadly credits the federal policies passed by Obama’s Democratic Party and implemented by his administration with allowing the industry to continue to grow during the recession. 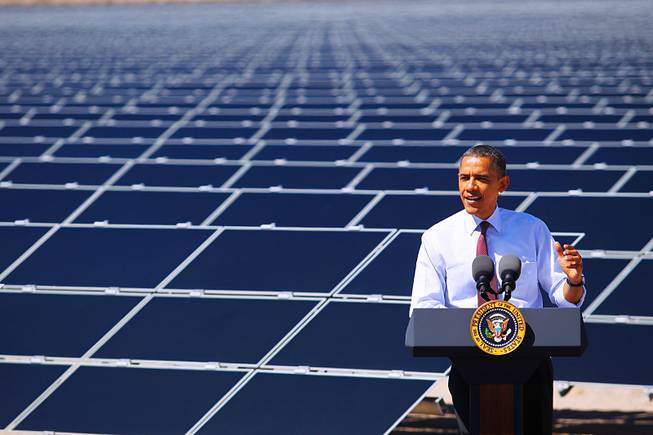