In October, the U.S. Department of Energy (DOE) awarded SolarReserve some $2 million to develop and test next generation heliostat designs through its HelioSR3 project. In total, the DOE allocated $12 million to 15 projects that will research high-temperature Concentrated Solar Power components and systems.

The research could reduce heliostat costs by 40%, through lower installation costs and staffing requirements and higher energy yield, he said. 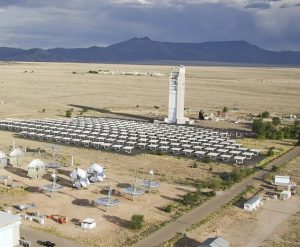 Such a cost reduction would significantly reduce the capex of Concentrated Solar Power plants, since heliostats account for up to 50% of capital costs.

The research will help propel CSP costs towards the DOE’s targets of $50/MWh for baseload CSP plants and $100/MWh for peaker Concentrated Solar Power plants by 2030.

“Cost reduction of the heliostat field through the HelioSR3 project will greatly help meet or beat these targets,” Haas said. The automation of worker tasks and improved diagnostics planned under the HelioSR3 project will «significantly reduce overall operation and maintenance costs,” Haas said.

The HelioSR3 system will incorporate automated heliostat calibration and alignment during installation and operations, which can significantly reduce labor requirements and associated costs.

CENER and IK4 TEKNIKER have also developed a solution which enables the plant’s heliostats to be calibrated simultaneously. According to the researchers, the calibration of an entire operational heliostat field can be completed within hours.

Other autonomous features in the HelioSR3 design will include self-diagnostics and tracking error corrections. The HelioSR3 researchers will also look to maximize the latest wireless technologies for heliostat communications, providing economies of scale in tracking and other operational activities, Haas said.

“Wireless communication is an area with the potential for radical control system cost reduction,” he said.

Reduced cabling requirements will lead to significant cost savings but this will require a new strategy for on-board power for the heliostat, Haas noted.

The team will research several power supply options, including PV-based systems, he said.

Modular design improvements will reduce capex costs and increase installation efficiency, for example through smaller heliostat sizes which can be used across various plant sizes, he said.

Stellenbosch University has already developed a prototype self-calibrating heliostat system with a modular design which leverages the economies of scale gained through high production volumes and reduced wind loads.

The university’s Solar Thermal Energy Research Group (STERG) has developed a second-generation experimental prototype that aims to provide insight into early commercial heliostat development. Comprised of six small lattice pedestal mounted heliostats arranged in an equilateral triangular formation, the design requires no foundations, can be installed on uneven ground and has been designed for easy manufacture and assembly.

The technology developed through the HelioSR3 project could be commercially available as soon as 2021.

The first year of the HelioSR3 project will see researchers focus on R&D activities at the NSTTF. This will be followed by prototype testing which will allow the partners to refine and validate the technology.

“The cumulation of the three-year project will result in a prototype that is ready for commercial deployment,” Haas said.