South Africa can be decarbonized thanks to Concentrated Solar Power

South Africa can be decarbonized thanks to Concentrated Solar Power

In one of the most sun-drenched corners of the planet, a 670-foot tower rises above a desert dotted with 4,160 mirrors. Tracking the sun throughout the day, the mirrors, called heliostats, redirect the sun’s rays into the tower, where water is heated to generate steam — and electricity.

Since the plant, Khi Solar One, began operating early this year near Upington, it has produced enough power for 65,000 homes during the day, but also, thanks to the latest technology, for a few hours after the sun sets.

South Africa is experiencing a boom in renewable energy, nonexistent here just a few years ago. Now, dozens of solar plants clustered in the country’s northern reaches and wind farms operating along the southern coast are generating 2.2 gigawatts — more than what most African nations can produce.

As the facilities have increased production, they have helped stop the blackouts that plagued South Africa until a year ago. In a country still dependent on coal, the renewable energy industry has been lauded by many energy experts and environmentalists as a model for developing nations.

But South Africa’s utility, Eskom, and some government officials do not see it that way. Criticizing wind and solar energy as costly and unreliable, they are pressing instead for a huge investment in nuclear energy: three power stations with a total of up to nine reactors to generate 9.6 gigawatts.

The battle over South Africa’s energy future has become increasingly fierce, often fought over kilowatts and other technical details, sometimes waged with bitter personal attacks between functionaries and electrical engineers. It is also being fought on South Africa’s larger political landscape, with forces seemingly close to the scandal-ridden administration of President Jacob Zuma pushing hardest for the nuclear deal while others support an expansion of renewables. 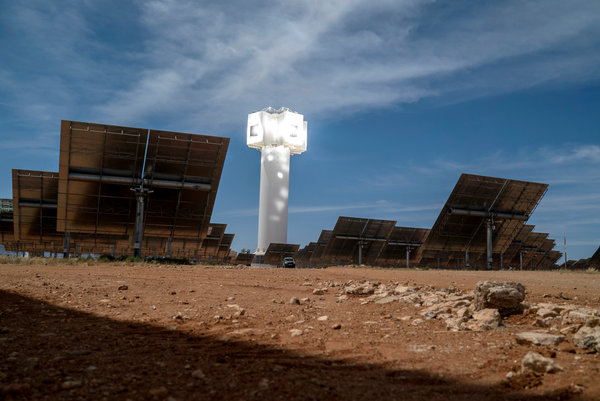 The tower of Khi Solar One near Upington, South Africa. The plant has produced enough electricity to power 65,000 homes during the day.
Joao Silva / The New York Times

“A line of attack is that anyone who wants nuclear is linked to President Zuma and therefore is corrupt,” said Matshela Koko, the head of generation at Eskom. “People aren’t dispassionate about nuclear. People have taken a political view. If you’re dispassionate, and look at the science and engineering of it, you will conclude that you need nuclear.”

Developing nations are closely watching the standoff between nuclear and renewables, two forms of low-carbon energy that they hope will power their growing economies. Countries as diverse as Bangladesh, Belarus, Turkey, the United Arab Emirates and Vietnam are adopting nuclear power.

More than 4,000 mirrors, called heliostats, redirect the sun’s rays into the Khi Solar One tower, where water is heated to generate steam — and electricity.
Joao Silva / The New York Times

In Africa, many countries are looking at solar and wind as a quick way to bolster generation capacity by leapfrogging older and dirtier sources of energy. Renewable energy could also bring diversification to nations dangerously dependent on a single source of electricity, like Malawi and Zambia, which have experienced crippling blackouts because of a severe drought that lowered water levels at hydroelectric dams.

As sub-Saharan Africa’s most advanced economy, South Africa has about half of the continent’s power-generating capacity. It has operated a nuclear power station, the only one on the continent, since 1984, though coal-fired power plants generate about 80 percent of its electricity.

Because of poor planning, the blackouts began in 2008. In 2011, desperate for more juice, the country started a program to attract private solar and wind producers that bid against one another on a number of projects.

By this June, the renewable program had attracted 102 projects worth $14.4 billion. Forty-four facilities, built on average in less than two years, are producing 2.2 gigawatts. By contrast, the construction of two huge government coal plants is facing years of delay and severe cost overruns.

“The program has been very successful, clear of any corruption and very well run,” said Wikus van Niekerk, the director of the Center for Renewable and Sustainable Energy Studies at Stellenbosch University. “It’s been seen by many people in the rest of the world as one of the most successful procurement programs for renewable energy. It’s something that the South African government and public should be proud about.”

“South Africa is one of the best places in the world for solar power,” said José David Cayuela Olivencia, the general manager of Khi Solar One.

Concentrated solar power can generate electricity at peak times of the day after the sun sets — but at a cost. The electricity produced by Khi Solar One, which Eskom must buy as part of a 20-year contract, is significantly costlier than regular solar power.

Workers laying cables for solar panels in Woodmead, north of Johannesburg. Many countries in Africa are looking at solar and wind power to bolster generation capacity and replace older and dirtier energy sources.
Joao Silva / The New York Times

Eskom officials say the supply from traditional solar and wind power plants fluctuates or comes during the day, when it is not needed.

At 7 p.m., when demand peaks, “the wind may not be moving, and the sun has set,” said Brian Molefe, Eskom’s chief executive. He added that further expansion of renewable energy should “go slow” until cheap and efficient storage technology for renewables is developed.

As South Africa weans itself off coal over the coming decades, in part to comply with the Paris agreement to mitigate climate change, Eskom officials argue that only an expansion of nuclear power will meet the country’s energy needs.

“We need baseload capacity,” said Mr. Koko, Eskom’s head of generation, referring to plants that can run around the clock. “We don’t want it to be coal, so it has to be nuclear.”

But others say that building nuclear reactors, with a life span of 60 to 80 years, would commit South Africa to an energy source just as renewables are getting cheaper. In the past five years, production costs for solar and wind have dropped so much that the most recently approved plants, now under construction, will generate electricity at the cheapest rate in South Africa. Over the coming decades, critics of the nuclear project argue, advances in storage and other technologies will emerge even as South Africa is saddled with nuclear power.

“The concept of baseload is actually an outdated concept,” said Harald Winkler, the director of the Energy Research Center at the University of Cape Town. “Eskom was built around big coal and to a lesser extent big nuclear — big chunks of baseload power. It’s really myopic in terms of where the future of the grid is going to go. We’re going to see in South Africa and the rest of the world much more decentralized grids.”

Opposition to South Africa’s nuclear plans is also coming from the government’s main research agency, the Council for Scientific and Industrial Research. An expansion of solar and wind energy, in addition to natural gas, could meet South Africa’s future energy needs for a cheaper price, according to a projection by the council.

“No new coal, no new nuclear,” said Tobias Bischof-Niemz, who leads the council’s research on energy. “South Africa is in a very fortunate situation where we can decarbonize our energy system at negative cost.”