South Africa could become a world leader in CSP

South Africa could become a world leader in CSP

“South African experts believed that renewables could supply up to half of the country’s energy by 2050,” noted advocacy group Renewable Energy Policy Network for the 21st Century (REN21) in a recent study.

Google will be an equity investor in a consortium putting $260 million into a photovoltaic solar power plant in the fast emerging South African renewables market.

South Africa grew its renewables capacity by 20,000 percent in 2012, faster than any other country in the world. Its total renewables investment last year was $5.5 billion, of which solar got $4.3 billion.

Jasper will be one of Africa’s biggest PV solar power plants. It was selected in May 2012 by the South Africa Department of Energy’s Renewable Energy Independent Power Producer Procurement Program (REIPPPP) in the second round of competitive bidding and awarded a twenty-year power purchase agreement with Eskom, South Africa’s state-owned utility.

South Africa’s DOE has targeted 3,725 megawatts, or 38 percent of all new generation, to be new renewable capacity by 2030. This is part of an effort to revive an inadequate electricity system that has caused costly intermittent blackouts since 2009. Of the total renewables targeted, REIPPPP is aimed at building 1,450 megawatts of PV, 1,850 megawatts of wind, and 200 megawatts of concentrating solar power (CSP).

The targets would make renewables 43 percent of South Africa’s electricity in 2030.

“South African experts believed that renewables could supply up to half of the country’s energy by 2050,” noted advocacy group Renewable Energy Policy Network for the 21st Century (REN21) in a recent study. “They believed that South Africa could become a world leader in CSP, with high local manufacturing content and competitive costs.”

The REN21 study also reported that South Africa is nearing PV grid parity, and that with increasing rural adoption and emerging urban net metering policies, PV markets are heading “off the charts.”

The SolarReserve, Kensani Group and Intikon Energy consortium previously provided $586 million to fund the 75-megawatt Lesedi Solar Energy Project and the 75-megawatt Letsatsi Project. Together with Jasper, the three REIPPPP bid-winning PV solar plants get South Africa well on the way to its 2030 PV target. 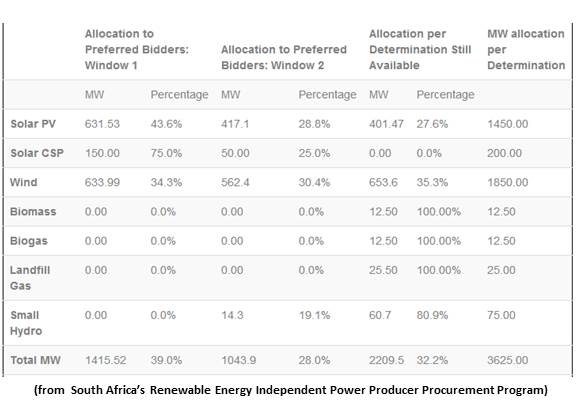 Jasper is expected to create some 300 construction jobs and 50 permanent jobs in a rural area of South Africa’s Northern Cape, as well as indirect and induced jobs across the supply chain during construction and its projected 25-plus year service. It will have a $4 million per year operations and maintenance budget and contribute $26 million from revenues over its life to benefit local communities.

Google’s first investment in Africa is expected to help the project through its construction phase. The $12 million investment brings Google’s total commitment to “more than US $1 billion” in renewables projects “capable of producing 2 gigawatts of power.” Google was previously an early backer of successes in PV solar in Germany, CSP in the California deserts, onshore wind in the Midwest and offshore wind in New England.

"The Jasper Power Project and other projects being developed through the REIPPPP have the potential to transform the South African power grid, and we’re proud to be a part of that effort," said Rick Needham, Google’s Director of Energy and Sustainability.