This is an increase on the 4.3% of demand that the nation met with photovoltaic (PV) and Concentrated Solar Power (CSP) together in 2012.

Spain’s grid operator has released provisional figures for 2013, finding that the nation met 3.1% of its electricity demand with solar photovoltaics (PV), and another 1.3% with concentrating solar power (CSP).

This is an increase on the 4.3% of demand that the nation met with photovoltaic (PV) and Concentrated Solar Power (CSP) together in 2012. When wind energy, hydro and other renewable energy sources are added, the nation met over 42% of its electricity demand with renewables in 2013.

Spain has also met a record 21% of demand with wind power, roughly tied with nuclear power as the largest source of the nation’s electricity. This means that wind energy, PV and CSP met 26% of demand during the year, one of the highest portions of electricity demand met with variable and intermittent renewable energy technologies globally.

The electricity demand on the Spanish peninsula during 2013, after factoring in the effects of seasonal and working patterns, has fallen by 2.1%, signifying a third straight annual decline. Gross demand was 246,166 GWh, 2.3% lower than 2012.
Red Eléctrica publishes this information in the Spanish Electricity System Preliminary Report 2013 that reveals the preliminary annual results of the behaviour of the electricity system.
January 23 was the day when most electricity was consumed reaching a total of 808 GWh.
Additionally, the yearly maximum of instantaneous demand was registered at 40,277 MW on 27 February at 8:42 pm, and the maximum average hourly demand was also recorded on the same day reaching 39,963 MW between 8:00 and 9:00 pm. 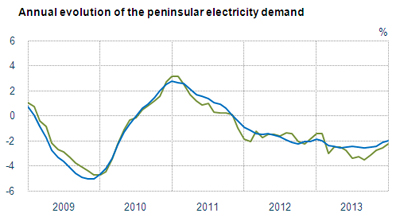 Green line: Non-corrected      Blue line: After factoring in the effects of seasonal and working patterns
Maximum contribution of renewable energy
Renewable energy, favoured this year by the high rainfall in the early part of the year covered 42.4% of the electricity demand in 2013, 10.5 percentage points higher than the previous year.
Wind power has been, for the first time ever, the technology that contributed most to the annual electricity demand coverage with a share of 21.1%, 3 percentage points higher than in 2012, reaching the same level as nuclear which contributed 21%.
Hydroelectric energy has also played a prominent role this year doubling its contribution to demand coverage with a share of 14.4%. Producible hydroelectric reached 32,205 GWh, 16% higher than the average historical value and 2.5 times higher than that registered in 2012.
Combined cycle reduced its share to 9.6% and electricity from coal-fired power stations fell to 14.6% (14.1% and 19.3% respectively in 2012) and the remaining technologies remained at similar levels to last year.
All-time wind power maximums
Throughout 2013, wind power has had a relevant share of the overall generation with a production of 53,926 GWh, 12% more than in 2012.
In addition to the annual production, wind power exceeded other all-time highs. On February 6 wind power recorded a new maximum of instantaneous power with 17,056 MW ​​at 3:49 pm, 2.5% up on the previous record registered on 18 April, 2012, at 16,636 MW.
That same day maximum hourly energy was also exceeded reaching 16,918 MWh, between 3:00 pm and 4.00 pm, representing an increase of 2.8% on the previous all-time high of 16,455 MWh, also registered on 18 April, 2012.
Similarly, in January, February, March and November wind power generation was the technology that made the largest contribution towards the total energy production of the system.
Installed power capacity increases by 556 MW ​​from renewable technologies
Installed power in the complete set of generating facilities on the Spanish peninsula increased by 556 MW ​​in 2013, closing the year with a total of 102,281 MW.
This year, the variation in installed power capacity comes mainly from the addition of new infrastructure of renewable sources, with 173 MW of wind power and 440 MW of solar technologies (140 MW of photovoltaic and 300 MW thermoelectric).
With these new additions, renewables now represent 49.1% of the total installed power on the Spanish peninsula. 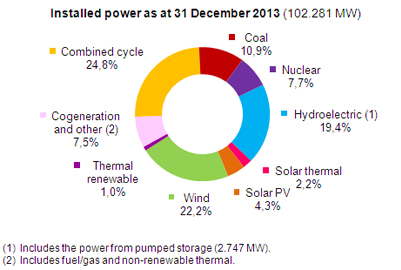 Extra-peninsular systems
Annual demand for electricity in the set of extra-peninsular systems fell by 2.9% in 2013 compared with the previous year. By electricity system, the registered falls were 2.5% in the Balearic Islands, 3% in the Canary Islands, 4.8% in Ceuta and 3.4% in Melilla.
The Spanish peninsula-Balearic Islands’ submarine link has allowed 22.3% of the demand of the Balearic Islands’ electricity system to be covered from the mainland.
Exporter balance in the international exchange programme
For the tenth consecutive year, the balance of international electricity exchanges has been as an exporter registering 6,958 GWh, 37.9% lower than 2012. Exports stood at 16,913 GWh and imports at 9,955 GWh.

Due to this variability, the actual contribution of wind energy and solar energy was higher during certain months. For example, PV and CSP met 8.0% of demand in June 2013, and wind power and solar power together met over 30% of demand during multiple months.

Spanish electricity demand was down 2.1% in 2013, the second year of declines. Additionally, the nation exported a net 6.96 gigawatt-hours (GWh) of electricity in 2013, or 2.8% of generation, with Morocco as the largest destination.