Spain has signaled a further departure from its former anti-renewables stance by naming the ex-boss of a renewables developer as Secretary of State for Energy.

Seville-born José Domínguez Abascal, picked up the energy portfolio this month after having led one of Spain’s highest-profile renewable energy developers, Abengoa.

Abascal’s most recent job was as a professor at the University of Seville’s Engineering School, a post he has held since 1982. He also holds professorships at the Madrid Polytechnic and Las Palmas de Gran Canaria universities. 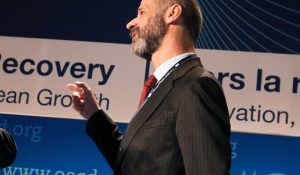 He entered politics in 2004 as General Secretary for Universities, Research and Technology in the Council of Andalusia, but in 2008 switched to an executive role leading renewables research at Abengoa, which at the time was basking in a government-funded solar boom.

Abascal remained at Abengoa for eight years, assuming the leadership of the company between September 2015 and February 2016.

During his tenure at the company, Abascal witnessed how lucrative handouts to Spanish renewable plant developers were hastily withdrawn after the global recession.

The Spanish Socialist Workers’ Party (Partido Socialista Obrero Español or PSOE in Spanish), which Abascal had served in Andalusia, ceded power to the right-wing People’s Party (Partido Popular or PP), which gutted Spain’s renewables program in a bid to achieve financial stability.

Out went feed-in tariffs and other incentives, and in came Spain’s famous tax on the sun, a dubiously calculated «reasonable return» on projects and a regulatory playing field that the government was free to change every three years.

With Spain’s renewable energy market in free-fall, many Spanish developers had to close. Larger companies such as Abengoa focused on other parts of the world where renewables were booming.

At the time, it looked like Abengoa could become a shining example of Spanish renewables expertise abroad.

Backed by a diversified industrial portfolio across fields ranging from water treatment to transmission infrastructure, the Spanish multinational was able to secure big-ticket renewables contracts in markets such as Chile, South Africa and the U.S.

However, Abengoa backed two renewable technologies, biofuels and concentrated solar power (CSP), that fared poorly in competition with lower-cost wind and PV. Plus, it had internal problems.

The company’s growth had largely been funded through credit at a time when Spain’s renewables market was still buoyant and CSP looked like the generation technology of the future.

By the end of 2015, neither of these factors were true, and lenders lost confidence. Abengoa’s shares plummeted and it looked like the company might go under for good.

Abascal took over the firm after the previous CEO, Santiago Seage, moved over to Abengoa’s U.S. YieldCo, Atlantica Yield. After months of uncertainty, Abengoa managed to survive.

Abascal, meanwhile, moved back to the more tranquil realms of academia. His new job as Secretary of State for Energy will be to get Spain’s credibility as a renewable energy market back on track.

The PSOE’s newly formed Ministry for Ecological Transition, which Abascal falls under, is committed to addressing climate change and is already pushing for increased renewable energy goals across Europe.

Renewable energy players are now watching to see if Abascal can stay true to that initial course, despite the fact that the PSOE presides over a minority government.

“We will have to wait to see action before passing judgment,” said Daniel Pérez Rodríguez, chief legal officer at the independent green energy retailer Holaluz and formerly a key figure in the Spanish renewable industry’s courtroom battle against cuts to incentives.

Jason is a contributing writer for GTM, focused on global trends in energy storage and wind. He is based in Barcelona, Spain.