The share of renewable energy in Dubai’s energy production mix now stands at 12.8%, and is expected to reach 14% by the end of 2022, mostly propelled by the sun, according to the Dubai Electricity and Water Authority (Dewa).

Total power production capacity of Dewa currently stands at 14,317 megawatts (MW), but the share of renewables will be ramped up significantly in the coming months. 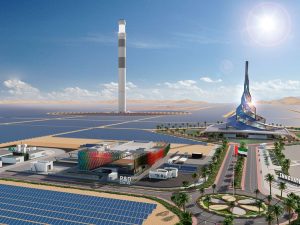 Dewa translates the ambitious vision and developmental renaissance in Dubai into mega projects and promising opportunities, especially in the energy, water, and environment sectors.

Among those projects is the Mohammed bin Rashid Al Maktoum (MBR) Solar Park, the largest single-site solar park in the world with a planned capacity of 5,000 megawatts (MW, or 5GW) by 2030, and investments of up to Dh50 billion ($13.61 billion) following the Independent Power Producer (IPP) model.

Dewa uses several technologies for clean energy production. One of which is the CSP technology, which can generate an ample supply of electricity around the clock with excellent energy storage capabilities.

Saeed Mohammed Al Tayer, MD & CEO of Dewa, said that the organisation is keeping pace with the latest clean technologies to achieve the vision of His Highness Sheikh Mohammed bin Rashid Al Maktoum, Vice President and Prime Minister of the UAE and Ruler of Dubai, and the Dubai Clean Energy Strategy 2050 and the Dubai Net Zero Emissions Strategy 2050 — to provide 100% of the energy production capacity from clean energy sources by 2050.

«Dewa has also implemented projects and initiatives to increase energy efficiency. Additionally, Dewa invests in the latest Fourth Industrial Revolution technologies and its state-of-the-art infrastructure to keep pace with the requirements of sustainable development. Dewa has also expanded its energy and water infrastructure to meet the growing demand according to the highest standards of availability, reliability, efficiency, and quality,” added Al Tayer.

Dewa works to develop energy storage technologies through pioneering projects, including the fourth phase of the Mohammed bin Rashid Al Maktoum Solar Park. On its completion, the project will have the world’s largest thermal storage capacity of 15 hours, allowing for energy availability around the clock.

This is a world record for thermal energy storage. The fourth phase of the solar park is the largest single-site solar IPP project in the world that combines CSP and PV technology with a capacity of 950MW.

It will use 700MW of Concentrated Solar Power (CSP), 600MW from a parabolic basin complex and 100MW from a solar tower. and 250MW from PV solar panels.

Dewa seeks to set two new records for the tallest solar tower in the world at 262.44 metres and the largest 700-megawatt CSP plant in the fourth phase of the Solar Park.

This ensures the security of energy supplies according to the highest international standards, with effective cost. This enhances Dubai’s position as the global centre for clean energy and a green economy.

The fourth phase achieved the world’s lowest CSP LCOE of USD 7.3 cents per kWh, and the lowest LCOE for PV technology of USD 2.4 cents per kWh.

It will generate electricity using the water stored at Hatta Dam with a storage capacity of 1,500 MWh.

Dewa attaches great importance to CSP projects and works to innovate its technologies. In recognition of its efforts in this area, Dewa’s R&D Centre, has been granted a patent for a system to measure atmospheric attenuation that results from different factors, such as dust.

This adds to Dewa’s record of achievements. The system identifies the best locations for solar towers and heliostats in CSP projects through meticulous calculations using a drone and an autonomous vehicle. The patent also enhances the efficiency of heliostats by controlling their direction to maximise the benefit from solar radiation.

Dewa won first place at the 6th International Best Practice Competition in the Partnership Category for its CSP project that it is currently being implemented at the Solar Park using the IPP model.