NamPower has made significant progress with regard to the development of its biomass and concentrated solar power projects its managing director Simson Haulofu indicated this week at the Invest in Namibia International conference.

“We have been looking at issues of biomass. We can generate quite a lot. Sixty megawatts (MW) of power can be realised from biomass. About 20 of that can come from NamPower.

“In addition to the biomass project is a concentrated solar project. We have already done socioeconomic impact studies on the concentrated solar power projects while also concluding water supply agreements,” he said. Speaking to the Namibian Sun on the sidelines of the conference, Innosun head Gregoire Verhaeghe said that his firm was in talks with private equity investor IJG Capital for its involvement of its envisaged power projects and stated that 25% would be available to local investors.

With regard to the development of NamPower»s base load power stations, Haulofu indicated that Kudu had entered the fray again and invited private equity investors to participate while concluding that extensive work and progress had been made regarding the Baines hydro-electric power station. 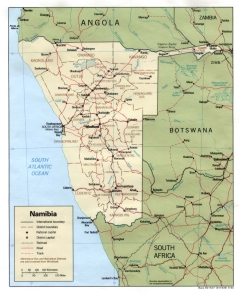 Said Haulofu: “We have concluded a socioeconomic impact assessment on the Baines power project. There is a lot to report back on. We are looking very critically at a base load power station. Kudu is

[also] still on the drawing board.” Haulofu concluded by stating that a number of agreements still had to be signed with the Angolan government.

It is envisaged that the Baines mid-merit/peaking power station»s capacity would be 600 MW which will be shared equally by Namibia and Angola according to Nampower, a project expected to require an investment just over US$1.2 billion.

Energy minister told a packed Safari Court conference room that investors were welcome tao invest in the Kudu project, indicating that 44% would have to be funded privately.