Sunvapor announced today that it is the recipient of a $2.2 million total cooperative award from the U. S. Department of Energy SunShot Initiative. The award will enable Sunvapor to reduce the cost of concentrating solar collectors while greening the supply chain.

«This award will help us demonstrate that the cost of solar can be drastically cut by taking advantage of renewable fiber-reinforced composite materials,» said Dr. Philip Gleckman, Sunvapor’s CEO. «Our digitally optimized designs look different and have a simpler construction because we are liberated from the rules that apply to steel,» he added. Fuel for process heat represents nearly half of all the primary energy used by manufacturers in the USA, contributing a fifth of the nation’s greenhouse gas emissions. «Solar process steam is the Sleeping Giant of renewable energy,» said James Valenti-Jordan, formerly with Campbell Soup Company and now a Sunvapor Advisor. «Sunvapor’s breakthrough collector will enable food processors to purchase steam at lower prices than natural gas,» he continued.

The U.S. Department of Energy SunShot Initiative is a collaborative national effort that aggressively drives innovation to make solar energy fully cost-competitive with traditional energy sources before the end of the decade. Through SunShot, the Energy Department supports efforts by private companies, universities, and national laboratories to drive down the cost of solar electricity to $0.06 per kilowatt-hour. Learn more at energy.gov/sunshot. 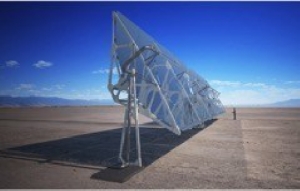 Sunvapor, Inc. develops technology solutions to sustainability challenges. In addition to SunShot, Sunvapor participates in the ARPA-e program as an industrial partner with Arizona State University. Sunvapor is based in Livermore, California.