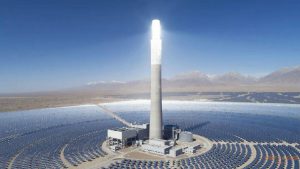 The Huanghe project was selected as one of China first batch of 20 demonstration CSP projects in September 2016, but was halted in the past three and half years for some reasons. At the very beginning, the project took DGS tower CSP technology from BrightSource Energy and changed the route into molten salt tower further on. And the location was set at Delingha, Qinghai Province at that time.

Moreover, Supcon Solar is also positive and active in global CSP markets and quite open to seek for cooperation with overseas partners in CSP project development, EPC, equipment & material purchasing etc. As CSP Focus reported earlier, the consortium of Energy China CGGC International and Supcon Solar was awarded as the EPC contractor for Greece MINOS CSP 50MW Tower Project last year, and the project is now looking for partners and vendors.

The MINOS project will take tower CSP technology with an installed capacity of 50MW and a 5-hour molten salt heat storage system, and is expected to be executed based on the technology and project development & construction experience of Supcon Solar.