TEXEL has a developed a form of thermal energy storage charged by electric heat to provide grid power and energy storage and plans to manufacture the technology in the US. The Swedish company began as a Concentrated Solar Power (CSP) firm (How CSP works) which has subsequently focused on standalone thermal energy storage due to its potentially greater economic advantage over battery storage. 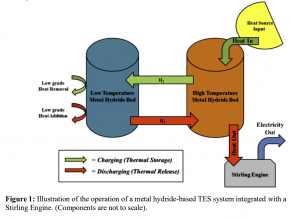 Thermal energy storage technologies such as this are just approaching their first deployments internationally. The first few commercial projects are just beginning in Europe with Abengoa’s Carnot battery, and the Bill Gates-funded Malta. Another US research institution, the National Renewable Energy Laboratory (NREL) is in the final stages of exploring another thermal battery concept that could be retrofit onto decommissioned coal power plants.

Their novel technology is based on metal hydride research licensed from the Savannah River National laboratory (SRNL) in the US. These materials can attain the necessary operational temperatures to pair with a high efficiency Stirling engine power conversion unit to covert heat to power.

While being as straightforward to site and permit as a battery, this thermal technology promises much lower costs, about a quarter that of battery technologies, according to a technical study of the technology by the US Department of Energy.

The study, Enabling a Flexible Grid with Increased Penetration of DER: Techno-economic Analysis of Metal Hydride Thermochemical Energy Storage Integrated with Stirling Engine for Grid Energy Storage Applications cited Lazard battery costs ranging between around 10 cents to 30 cents per kilowatt hour of electricity, and determined that depending on the system configurations, capital and operational LCOS for its operational lifetime (of 25 or 40 years) would range from around 7 cents to 2 cents/kWhr e.

The paper states: “The newly developed TES materials have advantages in being made from low-cost, highly abundant elements which operate at high temperatures (600- 750 °C). These materials have advantages over latent and sensible heat materials such as molten salts due to their non-corrosive nature, significantly higher energy densities, and ability to store thermal energy nearly indefinitely since the energy is held directly in chemical bonds. The overall system also contains no rare earth and platinum group metals which can hinder the long-term sustainability of a technology.

TEXEL has partnered with both Curtin University in Australia and Arizona State University (ASU) in the US where the technology is now undergoing market feasibility validation prior to pilot scale introduction.

At ASU, Assistant Professor Nathan Johnson led a team in cost analysis for deploying the storage system in a range of markets and expects to complete results next month in preparation for potential utility-scale pilot projects.

“The micro-grid testbed on the ASU campus provides an excellent stepping stone to go from verified analysis to then a pilot plant,” explained Johnson.

“We are doing the market competitive analysis right now that will inform future conversations with utilities and other large scale energy customers in our first pilot – and identifying additional business opportunities and advantages. We are now estimating costs for a range of deployment options in US markets. By having additional types of storage and additional business models this technology makes it possible to attain higher penetration of renewables, which may not be possible with existing conventional forms of storage,” he added.

Thermal storage with the deployment ease of a battery

This thermal energy storage could simply be delivered in a shipping container and have the same modular approach as a battery, making it as easy to permit and as scalable so it can store either greater capacity or longer duration of electricity.

“It’s a battery, but one that can be charged with either electricity or heat, so we could be storing energy from a solar farm, but we can also charge it with any heat source directly, with CSP or biomass or hydrogen gas for example,” he noted.

“This technology also generates a little waste heat from the Stirling engine as well as power and you can utilize the spare heat because you can bring the unit close into your building, so to heat water for example. When you have heat but you are in the middle of nowhere, it will be very difficult to utilize it, but the huge advantage of its simplicity is that you can bring these modules into buildings and you can use the waste heat as well.”

The ASU team is exploring the commercial viability of various scales of deployment between grid-scale and smaller options like apartment buildings.

“It’s dependent a bit on the cost structure and regulatory environment which will be different in all countries and potentially even different within countries at the state level. Because it comes in stack sizes of 30 kilowatts each you could have one of these – or 10 or a 100 and they could be put together in a way that’s modular and allow scalability which is beneficial just from a conceptual standpoint or the delivery standpoint when it comes to potential locations,” said Johnson.

“What our preliminary analysis is indicating is that larger scale systems will have a wider band of cost advantage versus lithium chemistries and so this would be at the megawatt-scale. So we think utility-scale solar farms, large-scale commercial and industrial customers, data centers, hospitals, mining or military bases.”

Johnson also noted that the technology’s cost-effectiveness relative to batteries is most pronounced the larger the scale, so that for example it could enable existing nuclear power plants at 1 GW or more make their always-on power fit better with an increasingly renewable grid; enabling nuclear to be utilized as more of a flexible resource to fill gaps in a PV and wind grid. 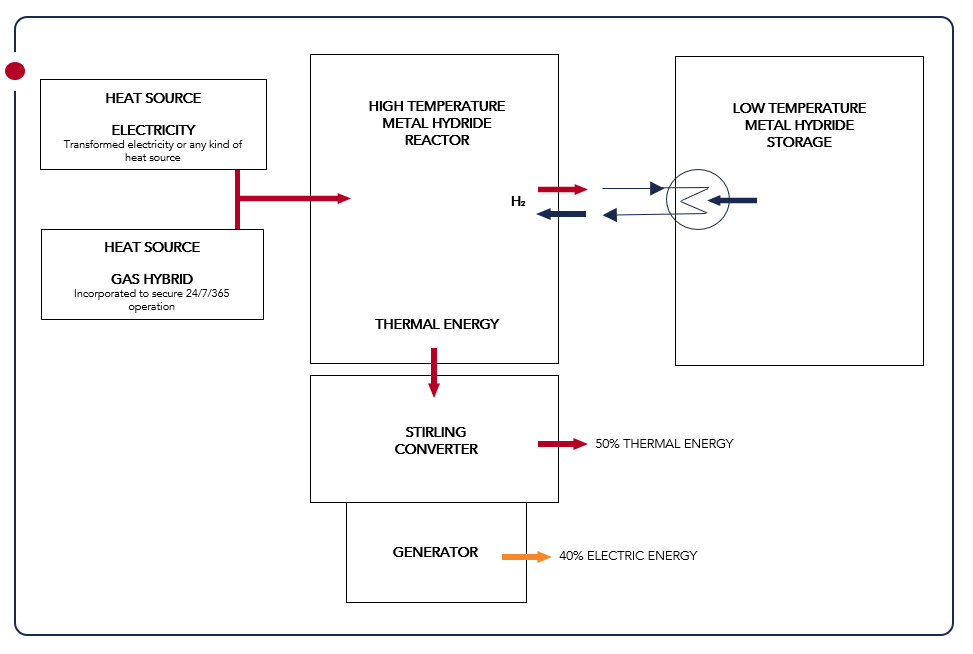 The temperature will then increase, raising the pressure in the system above the equilibrium pressure of the LTMH material and causing hydrogen to react with the LTMH. The lower grade heat produced in the LTMH material is rejected to maintain a lower temperature and lower equilibrium pressure in the LTMH bed. To release the stored thermal energy, the temperature of the LTMH bed is increased to release hydrogen which then reacts with the HTMH bed to generate a large amount of heat due to the larger enthalpy of that reaction.”

“The most important thing for us is that this technology is circular,” Jacobsson commented. “We are not consuming any resources when we are using this technology. We are just pushing the hydrogen back and forward within a circular system. And it uses no rare earths. No lithium, no cobalt. No nothing. To be able to turn away from fossil fuels we need solutions that have the capability of storing energy at low cost for more than 12 hours and are sustainable.”

Research and deployment of economically viable and circular energy storage technologies are crucially important because putting together a zero emissions energy system will be necessary for the long term survival of humans.