Renewable energy has become an increasingly competitive way to meet new power generation needs. This comprehensive cost study from the International Renewable Energy Agency (IRENA) highlights the latest trends for each of the main renewable power technologies. Released ahead of high-profile United Nations energy and climate discussions, Renewable Power Generation Costs in 2018 draws on the latest cost and auction price data from projects around the world. In 2018, around 0.5 GW of new concentrating solar power was commissioned – predominantly in China, Morocco and South Africa. The global weighted average LCOE concentrating solar power in 2018 was USD 0.185/kWh – 26% lower than in 2017 and 46% lower than in 2010.
The total installed capacity of CSP globally at the end of 2018 was around 5.5 GW, 4.3 times what it was in 2010. Despite this growth, CSP is the technology (of all those discussed in this report) with the lowest total installed capacity. To put this in context, today’s 5.5 GW of installed CSP was achieved by solar PV in 2005. Given the small scale of the market and suppply chains, it is therefore not surprising that the global weighted-average LCOE of the 0.5 GW of capacity added in 2018 was USD 0.185/kWh, just outside the fossil fuel-fired cost range.
However, the growing developer experience and broadening of supply chains from the steady, if low, commissioning of new projects in recent years is bearing fruit. The 26% decline in the global weightedaverage LCOE in 2018 compared to that of 2017 has been driven by the emergence of China as an important player in supply chains and project development. With a number of projects in the process of commissioning in China, the global weighted-average LCOE for 2019 is likely to be lower than 2018. As already mentioned, the results from recent auction and PPA programmes suggest that a step-change in CSP competitiveness will occur in the next four years as the the cost of electricity from CSP will potentially fall into the range of USD 0.06 to USD 0.10/kWh. With its ability to provide dispatchable renewable power, CSP could play an increasingly important role in allowing high shares of solar PV and wind in areas with good direct solar resources.

Lower total installed costs and higher capacity factors are driving the decline in the cost of electricity from CSP. The global weighted-average total installed cost of CSP declined by 28% in 2018, year-on-year, falling from around USD 7 200/kW in 2017 to USD 5 200/kW in 2018. At the same time the global weighted-average capacity factor increased from 39% in 2017 to 45% in 2018.
Although year-on-year variability in average installed costs is relatively high due to the small number of projects commissioned in any one year, the decline in 2018 to around USD 5 200/kW is likely to be sustained given that a number of Chinese CSP plants will be comissioned in 2019 that have lower installed costs than other markets. The 5th and 95th percentile range for individual projects comissioned in 2018 starts at around USD 3 400/kW and ends at around USD 7 000/kW, depending on project location and
storage duration.

CSP projects can achieve the lowest LCOE by including storage to improve the overall utilisation of the projects power block and associated investments. This has been reflected to some extent in trends in deployment, as the average storage of projects commissioned in 2018 (8.3 hours) was more than twice the level observed in 2010 (3.6 hours). The optimal level of storage, however, varies depending on the solar resource and the storage and collector costs, but is typically in the range of 7–10 hours.
The trend towards higher levels of storage and capacity factors for commissioned CSP plants is visible. This has been supported by the shift in the market away from Spain, where the direct normal irradiance (DNI) is typically in the range 2 000 to 2 250 kWh/m²/year to markets with higher levels of DNI from 2014 onwards.

Continuing cost declines, meanwhile, underline renewable power as a low-cost climate and decarbonisation solution. Within IRENA’s global database, over three-quarters of the onshore wind and four-fifths of the utility-scale solar PV project capacity due to be commissioned in 2020 should provide lower-priced electricity than the cheapest new coal-fired, oil or natural gas option, the report notes.

Along with reviewing cost trends, the report analyses cost components in detail. The report draws on IRENA’s cost database of around 17 000 renewable power generation projects and 9 000 auction and power purchase agreements for renewable power.

Total installed costs in 2018 by component and country

Renewable power is the cheapest source of electricity in many parts of the world already today, the latest report from the International Renewable Energy Agency (IRENA) shows. The report contributes to the international discussion on raising climate action worldwide, ahead of Abu Dhabi’s global preparatory meeting for the United Nations Climate Action Summit in September.

With prices set to fall, the cost advantage of renewables will extend further, Renewable Power Generation Costs in 2018 says, based on a comprehensive review of data from projects around the world. This will strengthen the business case and solidify the role of renewables as the engine of the global energy transformation.

“Renewable power is the backbone of any development that aims to be sustainable”, said IRENA’s Director-General Francesco La Camera. “We must do everything we can to accelerate renewables if we are to meet the climate objectives of the Paris Agreement. Today’s report sends a clear signal to the international community: Renewable energy provides countries with a low-cost climate solution that allows for scaling up action.

“To fully harness the economic opportunity of renewables, IRENA will work closely with our membership and key partners to facilitate on-the-ground solutions and concerted action that will result in renewable energy projects.”

The costs for renewable energy technologies decreased to a record low last year. The global weighted-average cost of electricity from concentrating solar power (CSP) declined by 26%, bioenergy by 14%, solar photovoltaics (PV) and onshore wind by 13%, hydropower by 12% and geothermal and offshore wind by 1%, respectively.

Cost reductions, particularly for solar and wind power technologies, are set to continue into the next decade, the new report finds. According to IRENA’s global database, over three-quarters of the onshore wind and four-fifths of the solar PV projects that are due to be commissioned next year will produce power at lower prices than the cheapest new coal, oil or natural gas options. Crucially, they are set to do so without financial assistance. 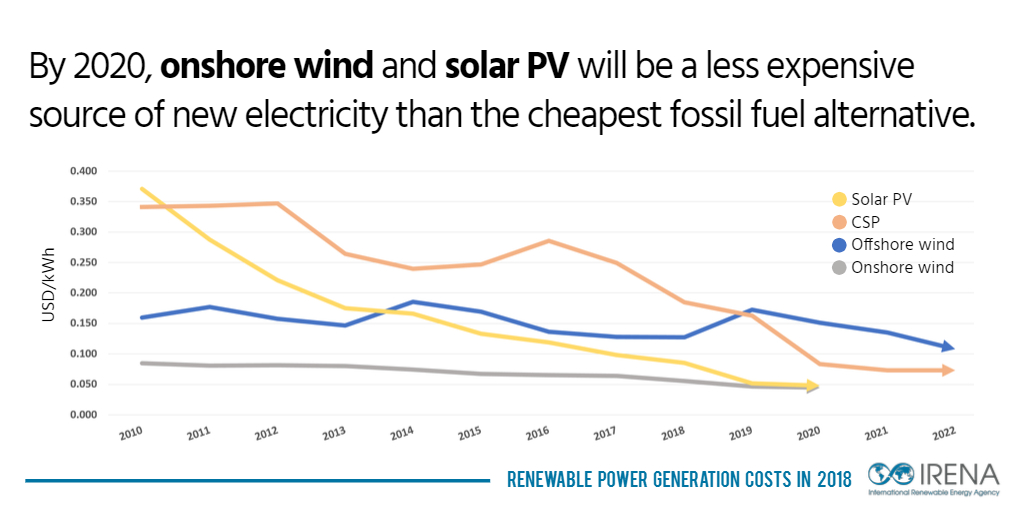 Onshore wind and solar PV costs between three and four US cents per kilowatt hour are already possible in areas with good resources and enabling regulatory and institutional frameworks. For example, record-low auction prices for solar PV in Chile, Mexico, Peru, Saudi Arabia, and the United Arab Emirates have seen a levelised cost of electricity as low as three US cents per kilowatt hour (USD 0.03/kWh).

Electrification on the basis of cost-competitive renewables is the backbone of the energy transformation and a key low-cost decarbonization solution in support of the climate goals set out in the Paris Agreement.