Dubai Electricity and Water Authority will tender a 300 megawatt concentrated solar power (CSP) plant for the Mohammed bin Rashid Al Maktoum Solar Park before the first quarter of 2019 as the UAE looks to meet 7 per cent of its power needs from the sun by 2020, according to its utilities chief.

The CSP unit will be tendered with storage, Saeed Al Tayer, Dewa managing director and chief executive, said on the sidelines of the opening of the first part of the 800MW phase three of the solar scheme in the Seih Al Dahal desert to the south of Dubai. A consortium led by Abu Dhabi’s Masdar and France’s EDF Group are set to complete the third phase by 2020, for which they have secured $650m in financing arranged through banks, according to Fawaz Al Muharrami, executive managing director of Shuaa Energy, the joint venture by both partners.

The solar park, being built in phases, is set to have a 5,000MW capacity by 2030 and will be the largest independent power producer (IPP) model single-site solar park in the world, once completed. Dubai, currently meets 4 per cent of its power needs from solar with the remainder generated from natural gas. The emirate has targeted generating 25 per cent of its energy needs from clean resources by 2020, which it hopes to scale up to 75 per cent by 2050. 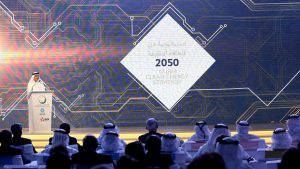 Dewa plans to spend around Dh81 billion over the next five years to develop its energy infrastructure. Of the planned spend, Dh39bn would go the IPP developer, Mr Al Tayer said.

An IPP refers to an entity that generates power for sale to a public utility.

In March Dewa awarded contracts to build four substations with a combined value of Dh1.28bn as part of its wider programme to boost power capacity.

Among other developments Dewa is targeting is a hydrogen plant to be developed with Germany’s Siemens that is set to provide fuel for buses plying to the solar park during Dubai’s hosting of the Expo 2020, Mr Al Tayer said.

The utilities developer is also working to stem loss of water during its transmission and distribution, which Dewa estimated was around 7 per cent last year.

“We hope that this year we’ll reach 6 to 5 per cent and we will do a lot of automation for distribution now,” he said.

Dewa is also currently undertaking a study of its last water reservoir project before it switches to aquifer storage, which involves storing strategic reserves of water in natural fissures underground. Dewa earlier this year awarded consultancy contracts to design and construct two water reservoirs at Al Nakhli and Al Lusaily that will increase the storage capacity of Dubai to 1 billion gallons.

“The natural reservoirs being studied could contain about 1.6 billion gallons of water. We started three years ago, and we’ll announce our findings by the end of the year,” Mr Al Tayer said.

HH Sheikh Mohammed bin Rashid Al Maktoum, Vice President and Prime Minister of UAE and Ruler of Dubai, has inaugurated the 200 megawatt (MW) first stage of the 800MW third phase of the Mohammed bin Rashid Al Maktoum Solar Park. The solar park is one of the major projects that DEWA is implementing based on the Independent Power Producer (IPP) system in partnership with a consortium led by Abu Dhabi Future Energy Company (Masdar) and EDF Group, through its subsidiary EDF Énergies Nouvelles. The second and third stages of the third phase, which have a capacity of 300MW each, will be completed in 2019 and 2020 respectively.

HE Saeed Mohammed Al Tayer, MD & CEO of Dubai Electricity & Water Authority (DEWA), welcomed HH Sheikh Mohammed bin Rashid Al Maktoum and said, “We are honoured by Your Highness being present today and your generous patronage of today’s inauguration. Today marks the commissioning of the first stage of the third phase of the Mohammed bin Rashid Al Maktoum Solar Park. This phase is a key milestone and shows our strong belief in the role of clean energy in shaping a sustainable future. This supports the UAE’s efforts to strengthen its leading global position in clean energy through such major projects. This also contributes to realising the vision of our wise leadership led by His Highness Sheikh Khalifa bin Zayed Al Nahyan, President of the UAE, the directives of Your Highness, and the aspirations of His Highness Sheikh Mohamed bin Zayed Al Nahyan, Crown Prince of Abu Dhabi and Deputy Supreme Commander of the UAE Armed Forces, for a post oil era. Through this national landmark, which Emirati youth help grow every day, they are establishing a happy and prosperous society that will achieve the UAE Centennial 2071 objective of making our nation the best country in the world.”

“His Highness’s pioneering strategy launched in 2012 has markedly changed the progress of sustainability in the UAE and the region; extending its impact to the entire world. This was the UAE Green Growth Strategy under the theme ‘A Green Economy for Sustainable Development.’ The pinnacle of this journey was the launch of the Mohammed bin Rashid Al Maktoum Solar Park in 2012 by His Highness. Dubai adapted the Independent Power Producer (IPP) model to achieve industry-defining world records. These have reduced solar electricity tariffs for large solar projects and the world’s biggest investments, to generate positive economic returns. The UAE Vision 2021, the Dubai Plan 2021 and the Clean Energy Strategy 2050 also support our focus on living in a world powered by clean and renewable energy.”

“In Abu Dhabi, in June 2016, we witnessed the signing of the partnership agreement between DEWA and a consortium led by Abu Dhabi Future Energy Company (Masdar) to implement the 800MW third phase of the Mohammed bin Rashid Al Maktoum Solar Park, which is being built in stages at the lowest Levelised Cost of Energy in the world of 2.99 US cents per kilowatt hour, using photovoltaic solar panels. Today shows the initial fruits of the combined efforts of DEWA, Masdar, and EDF, because there is more to come.”

“The remaining stages of the third phase of the Mohammed bin Rashid Al Maktoum Solar Park are currently under construction to generate a further 600MW, for a total of 800MW by 2020. The total capacity of the photovoltaic and Concentrated Solar Power IPP–based projects is 1,500MW. After the inauguration of this leading milestone, solar power will now generate 4% of Dubai’s total installed capacity.”

“This solar plant is the first of its kind in the Middle East and North Africa, with an advanced solar tracking system to increase generation efficiency. It also uses unique technologies including over 800,000 self-cleaning solar cells that maintain a high-performance level. The project has been implemented with over 2.4 million accident-free man-hours. It will provide over 60,000 residences with electricity, reducing over 270,000 tonnes of carbon emissions every year,” noted Al Tayer.

“The UAE’s impressive progress in the field of renewable energy would not have been achieved without the vision of its leadership, which aims to strengthen the energy security of the country by building on the foundation of its hydrocarbon sector to create a diverse mix including conventional energy, renewables and nuclear energy,” said HE Dr. Sultan Ahmed Al Jaber, UAE Minister of State and Chairman of Masdar.

“Masdar and Dubai Electricity and Water Authority have played an active role in enhancing the cost efficiency and productivity of renewable energy by deploying the latest advances in technology,” Dr. Al Jaber added.

“Solar power complements conventional energy in a relationship that makes perfect economic sense in this region, given the number of clear sunny days in the year, by helping to reduce energy costs through peak shaving.”

Dr. Al Jaber further highlighted the critical role played by large-scale renewable energy projects in stimulating job creation and innovation in knowledge-based industries. He added that the major projects now underway in the UAE and Saudi Arabia showed that the region, which for years has led the way in the traditional energy sector, was now at the forefront of the development of renewable energy.

Dr. Al Jaber praised the efforts of all the teams involved in Shua’a Energy 2 from Dubai Electricity and Water Authority, Masdar, and EDF Energies Nouvelles, wishing them every success in the realisation of a strategic project for the UAE.

“It is a great honour for the EDF Group to contribute to the Emirate of Dubai’s energy transition. I am delighted with the trusting relationship we have forged with our partners, DEWA and Masdar, to develop carbon-free energy in the region and beyond. The third phase of the Mohammed bin Rashid Al Maktoum Solar Park exemplifies the EDF Group’s ability to execute large-scale solar projects, whilst contributing to the ambitions of the Group’s CAP 2030 strategy: doubling its renewable capacities and tripling its international business outside of Europe by 2030,” said HE Jean-Bernard Levy, Chairman and CEO of EDF Group.