The concentrated solar power generated 2.4% of electricity in March in Spain

The concentrated solar power generated 2.4% of electricity in March in Spain

Once the effects of the calendar and the temperatures have been corrected, the peninsular demand of the month has been 4.5% lower than the same month of the previous year. 43.5% of the peninsular generation was renewable energy (wind energy 24.2%, solar thermal 2.4% and photovoltaic 3.9%) and 70.9% did not emit CO2. 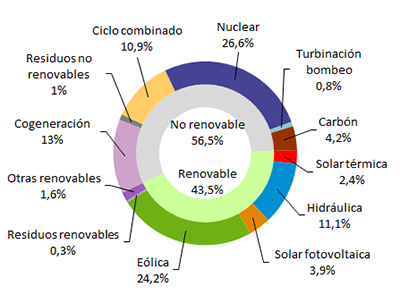 Generation structure from January to March 2019

With information available to date, the production of wind origin in March reached 4,794 GWh, 37.3% less than the same period last year, and accounts for 24.2% of total production.

In the month of March and according to estimated data, generation from renewable energy sources represents 43.5% of production.

70.9% of electricity production this month comes from technologies that do not emit CO2.