Solar thermal power plants already offer below 6 cents per kWh.  CSP Today, with the collaboration of Protermosolar and ESTELA, organizes the XI International Summit of Thermoelectric Solar Concentration, an event of the concentrated solar power sector, which takes place in Seville today and tomorrow.
The president of Protermosolar and ESTELA, Luis Crespo, has given the inaugural lecture, in which he has anticipated the exponential growth that the solar thermal sector will experience in all the countries of the solar belt having achieved lower generation prices than the combined cycles and, in addition , not be subject to the uncertainties of fuel increases or cost of emissions.

In fact, Luis Crespo stressed that «the cost of production offered by concentrated solar power in 2017 has been less than 6 cents per kWh in different regions of the planet, which undoubtedly announces the take-off of solar thermal power plants worldwide». 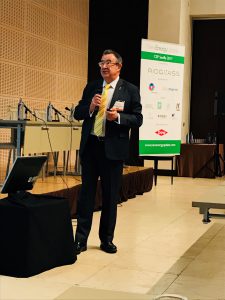 For the president of Protermosolar, «there are no excuses so that countries like Spain do not undertake a transition towards a mainly renewable generation model, removing the obsolete and polluting coal plants, as well as the nuclear ones, at the rate that they can orderly proceed to their dismantling, without this means a cost increase for consumers but, on the contrary, a unique opportunity to boost the economy of the country «.
As indicated by Luis Crespo in his speech, «energy efficiency and demand management, together with the appropriate use of interruptibility contracts and the increase in interconnections, would be sufficient for the deployment of new solar thermal power and the margin of operation that the combined cycles still have until 2030, can be compensated for the support that coal and nuclear would no longer provide. »
The Summit is attended by more than 27 countries through representatives of companies, organizations (such as the World Bank) or energy managers, among which the Jordanian delegation, which will analyze the road map for concentrated solar thermal projects have the design and supplier appropriate, with additional cost reduction and ensuring the performance of the plants.

It will also study the developments that are taking place in regions or countries such as the Arab Emirates, China, Morocco or South Africa, among others, where about 2 GW will be connected to the grid in 2018, so that next year could be considered as the of the takeoff of this technology in which, until now, Spain maintains a position of technological leadership.