The concentrated solar power plants has generated electricity for 24 hours a day on the 31st day of July, obtaining the generation record above 100 MW over 723 hours. The concentrated solar power has set a record for monthly electricity generation, reaching 899 GWh in July, according to the REE data (Source: REE) collected by Protermosolar, the Spanish Association for the Promotion of the Solar Thermal Industry, which indicates that this generation supposes 4.1% of the total generation of July in Spain.

In addition, solar thermal power has generated electricity for 24 hours a day, 31 days in July, so it also achieves a new generation record above 100MW over 723 hours, equivalent to 30 days, according to data from ESIOS (Source ESIOS) collected by the Spanish solar thermal management. The third record that the concentrated solar power has passed last July is having achieved a continuous generation above 100 MW for 16 consecutive days.

Regarding the monthly generation in July, the 899 GWh of concentrated solar power generation represent a load factor of 53%, taking into account that the installed power in Spain is 2,300 MW, which represents approximately 2% of the total installed power of the Spanish electrical system. The previous record held the month of July 2015, with 889 GWh, although, it should be remembered that the solar thermal park is formed in its 2/3 parts by plants without storage and 1/3 by plants with storage, due to the circumstances of the decade in which the plants were designed. In the future all solar thermal power plants will be equipped with storage.

This record of monthly generation is preceded by a year in which the concentrated solar power generation is being lower than the previous year. In fact, 2017 was a year with excellent solar radiation, but with really low rainfall. However, this year, it has had more rains and this abundance of storms has associated with a greater hydraulic and wind generation. The main conclusion is that the complementarity of renewable resources is a reality in Spain and if the generation park is dimensioned correctly, Spain can reach high decarbonization levels of the electricity system, as Protermosolar argues in its Transition Report for the sector electric, Horizon 2030. 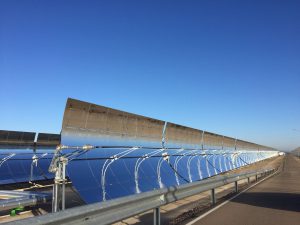 Protermosolar is the association that represents the Spanish sector of the thermoelectric solar industry and is made up of 48 members. Solar thermal technology, in which Spain is an international leader, has recently entered the world of renewable energies with strength and currently has great growth potential due to its manageability and storage capacity, due to its high employment creation local and for its potential to reduce costs. The installed capacity in Spain is 2,300 MW and the contribution of Spanish companies in international markets is around 75%.