According to Wenbo Huang, vice chairman of Beijing Shouhang IHW Resources Saving Technology Co., Ltd, in the 7 cloudy days of July, the power station collected heat on the cold salt in some periods; in the 5 complete cloudy days, the power station didn’t collect heat on salt. In the remaining 19 sunny days, all the molten salt was transferred onto the tower for heat-collecting. Within this month, the hot salt was heated for a total of 151 hours and the cold salt for 44 hours.

Ground of the first phase project of Shouhang Dunhuang solar thermal power generation project was broken in August 2014 and became officially operational on December 26, 2016. According to Huang, the climate change of Dunhuang, the increasing cloud volume posted challenge to the concentrating and collecting of the solar field. However, the power generation of the plant has been steadily improved against the backdrop and the performance indicator of each system is close to its designed one since its operation. 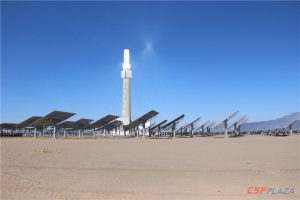 The project with 15h energy storage system is the first tower CSP project with such a long storage period in China. It is the third in the world and the first in Asia to achieve 24-hour continuous power generation.