The Board of Trustees of the Cyprus Institute (CyI) has ratified the appointment of Dr. Manuel Blanco as the EC-funded European Research Area (ERA) Chair holder in the field of Solar Thermal Energy. He will join the Energy Division of the Cyprus Institute’s Energy, Environment and Water Research Center (EEWRC).
Prof. Manuel Blanco has thirty years of experience as a solar researcher and engineer, contributing to the advancement of Concentrating Solar Thermal (CST) technologies internationally. He is currently the Director of the Australian Solar Thermal Research Initiative (ASTRI) and a Senior Research Scientist at CSIRO – the Australian National Research Agency. He is also the Chair of the Executive Committee of SolarPACES, the Technology Collaboration Program of the International Energy Agency regarding Solar Power And Chemical Energy Systems. Previous appointments include Director of the Solar Thermal Energy Department of CENER, the National Renewable Energy Centre of Spain; Chair and Full Professor of the Engineering Department of the University of Texas at Brownsville; Director of the Plataforma Solar de Almería of CIEMAT, the largest European solar research infrastructure. Dr. Blanco has authored numerous scientific publications, and participated in a senior capacity in a large number of international expert committees.
The President of the Cyprus Institute, Prof. C. N. Papanicolas and director of the Energy program at the Institute, stated: “The ability of the Cyprus Institute to attract world leaders of the caliber of M. Blanco, is yet another confirmation of its international prestige and an excellent indicator of the future role it can play in its quest for excellence. With this appointment we position ourselves ideally to claim a leadership position in solar thermal technologies internationally“. 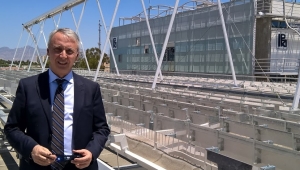 The prestigious ERA chair grant, was awarded to CyI in order to develop excellence at a European level, and constitutes recognition for the successful research work being pursued at the Institute in the very important research area of Solar Thermal Energy.

In regard to his appointment, Prof. Blanco indicated that: “After having had the pleasure and honor of directing the largest solar thermal collaborative research program in Australia for the last four years, it is a thrill to have the opportunity to go back to the European Union as an ERA Chair to contribute to the consolidation of the Cyprus Institute as the center of reference in solar thermal technologies for the Eastern Mediterranean and the Middle-East. I am well acquainted with the workings of the institute and highly impressed by the whole concept of the organization, its vision, capacity for innovation, scientific capabilities, and research excellence”.