The Fastest Route to Commercialize Solar Hydrogen – is through Australian Copper Mines?

The Fastest Route to Commercialize Solar Hydrogen – is through Australian Copper Mines?

The fastest route to commercializing solar hydrogen could be by supplying hydrogen, oxygen and heat for Australia’s copper mining industry with solar thermochemistry, Christian Sattler told this reporter for SolarPACES recently. 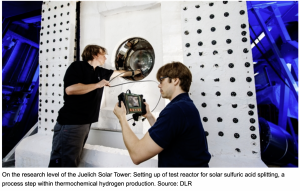 In the two-step HyS process, researchers use high temperature solar heat at up to 900 °C to decompose sulfuric acid (H2SO4) to generate hydrogen and oxygen by splitting water. The solar heat comes from a solar field of heliostats (mirrors) aiming concentrated solar flux to a receiver atop a power tower. The decomposition of H2SO4 is part of the first process step producing sulfur trioxide (SO2) and oxygen.

In the second step, the SO2 together with water goes to an SO2-depolarised electrolyzer (SDE) generate hydrogen and fresh H2SO4 which is recycled to step one. Compared to conventional water electrolysis, the SDE only requires about a seventh of the electrical energy so that the HyS can produce about 50% more hydrogen with the same solar input.

International research groups in Germany, Australia, Japan and the US have engineered and tested the component parts needed for this very high temperature sulfur-based process – a solar reactor/evaporator, a heat exchanger for SO3 decomposition, an oxygen separator for SO2 and O2. Materials search identified construction from silicon carbide which can maintain stability in the corrosive conditions and the very high temperatures needed to perform the thermochemistry.

Many advantages of sulfur-based solar thermochemistry

Sulfur can be stored cheaply for a long time just in a pile outdoors; like a pile of coal. Unlike all other heat storage technologies, its stored energy can be retrieved at a temperature actually higher than that of the original heat input, and recovered at a constant temperature.

A sulfur-based thermochemical process has more than an order of magnitude greater storage capacity than today’s molten salts, which would cut the cost of reliable round-the-clock operation even further than CSP’s current storage cost, which is about one tenth that of batteries. Energy storage is necessary in solar fuels production. Like many industrial processes, hydrogen splitting needs a steady supply of heat round-the-clock. All solar thermochemical processes include some way of ensuring this steady supply by hybridizing the solar reactor or by including a thermal energy storage medium like commercially proven molten salts.

“If you want to employ any kind of renewable energy you need to have enough storage behind it enabling you to run a 24/7 supply,” added Mehdi Jafarian, who is contributing to HyS research at the School of Mechanical Engineering at Australia’s University of Adelaide.

“So that’s why we think that the HyS process has potential to be integrated in copper processing whereas if for example, you used solar PV then the cost for battery storage would add significantly to the net cost to decarbonize those processes,” he added. 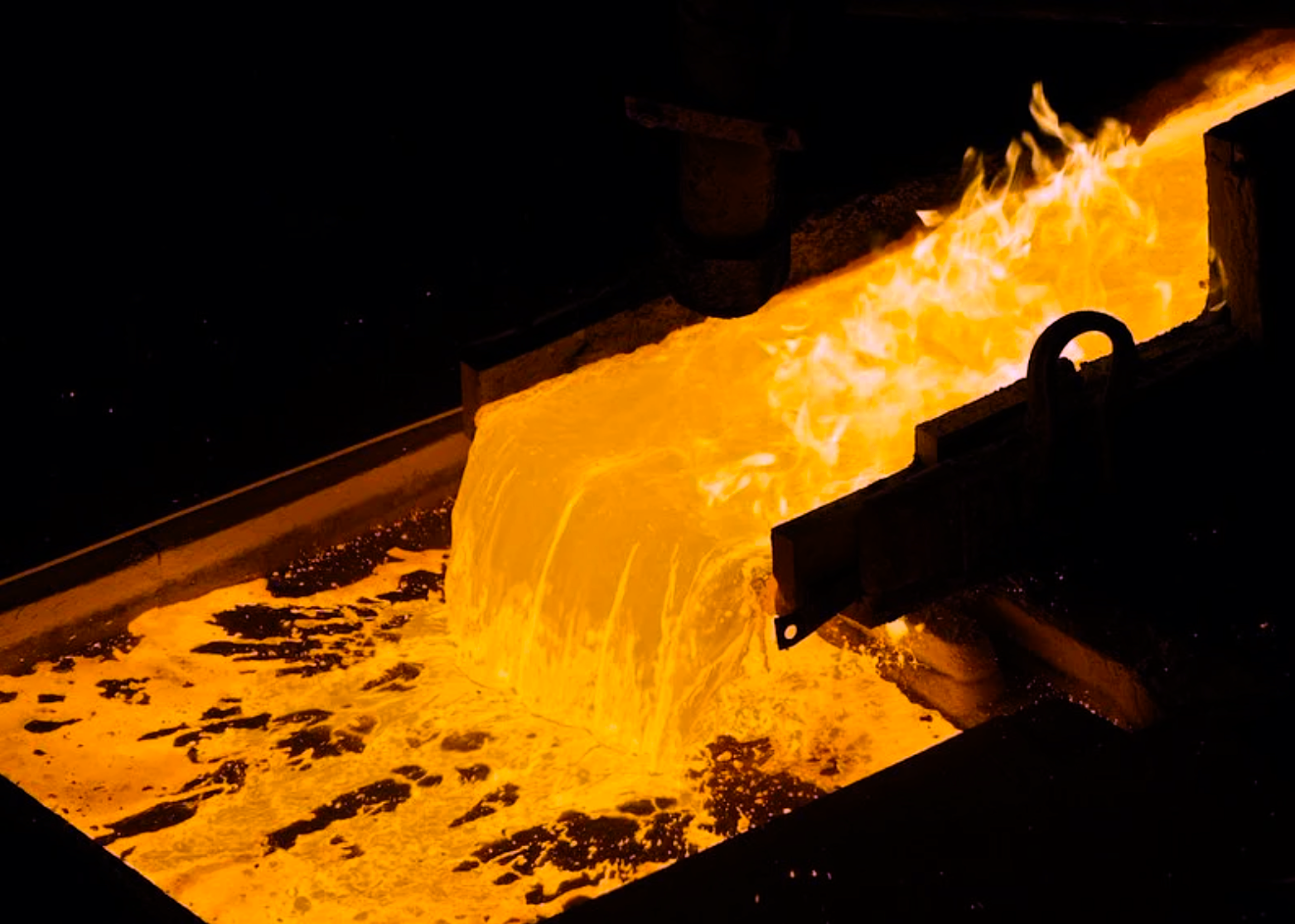 How is sulfuric acid used in copper mines?

Sulfuric acid reactions are used to refine copper from ore, and both hydrogen and oxygen can be generated in the solar reactor from sulfuric acid, which are needed in the copper refining process.

“There are mining processes like copper ore roasting where sulfur dioxide is produced. This can be used in a hybrid thermal/electrical cycle to produce hydrogen, oxygen and sulfuric acid,” Sattler explained.

“Copper mines need both hydrogen and oxygen. They need the oxygen first to roast the ore because there’s a lot of sulfur in it. With the roasting, you transform the ore into copper oxide and then you need hydrogen to reduce the copper oxide to copper. The copper ore contains the sulfur you use to produce the sulfuric acid which in turn you use to leach out the other impurities in the minerals.”

Win-win: make solar hydrogen and oxygen onsite at the copper mine

Currently, because of the expense of getting hydrogen and oxygen to the mines and the cost of fossil fuels for heat for the chemical reactions needed, copper mines only produce copper oxide on site, and then they have to send the copper oxide off to another company for refining into copper, so the mines lose out on producing the valuable end product of copper.

“This HyS technology will be able to provide that on site. So if you are able to produce hydrogen and oxygen at the same site where the copper mine is – you will be independent of an external company, that otherwise has to produce the gases elsewhere to refine the copper oxide. This increases your costs.” Sattler explained.

Once solar hydrogen is produced as part of an industrial service to the copper mining industry, the scale is established for its mass production as a standalone energy carrier with many applications in hard to decarbonize sectors, such as heavy transport like cargo shipping.

Jafarian noted that the largest mining company in the world with major holdings in Australia, BHP Group has in the last month delivered their plan for green hydrogen. “If this giant wants green hydrogen, that to me is the fastest route and Australia has all the infrastructure, capabilities and resources to do that,” he said.

University of Adelaide solar research engineer Alfonso Chinnici agrees that Australia is where the HyS research could get commercialized first. A private/public initiative to decarbonize heavy industry has begun there, through a Cooperative Research Center (CRC) and the HyS technology is about to get a trial. Chinnici, who is also involved in Australia’s HiltCRC program, noted that DLR is about to ship a receiver to Australia for a small pilot scale trial in the lab.

“And then with an on-sun test – outdoors with a solar heliostat field – likely in 2022. So this won’t be five or ten years down the track,” he said.

“I think DLR have quite an accelerated program, because it doesn’t start from zero; there has been a lot of know-how generated by Christian’s group at DLR. They have been working I think for some five years now developing the idea and the receiver. So the background of the technology itself has been done already.”

According to Jafarian, additional improvements to test in this advanced solar technology continue: “We are also working on another technology to improve the way that we introduce solar energy into the system. We are working on a kind of solar receiver that we call a solar cavity bubble receiver. We’ve done some technological assessment and found that that also offers potential to even further decrease the costs.” he said. 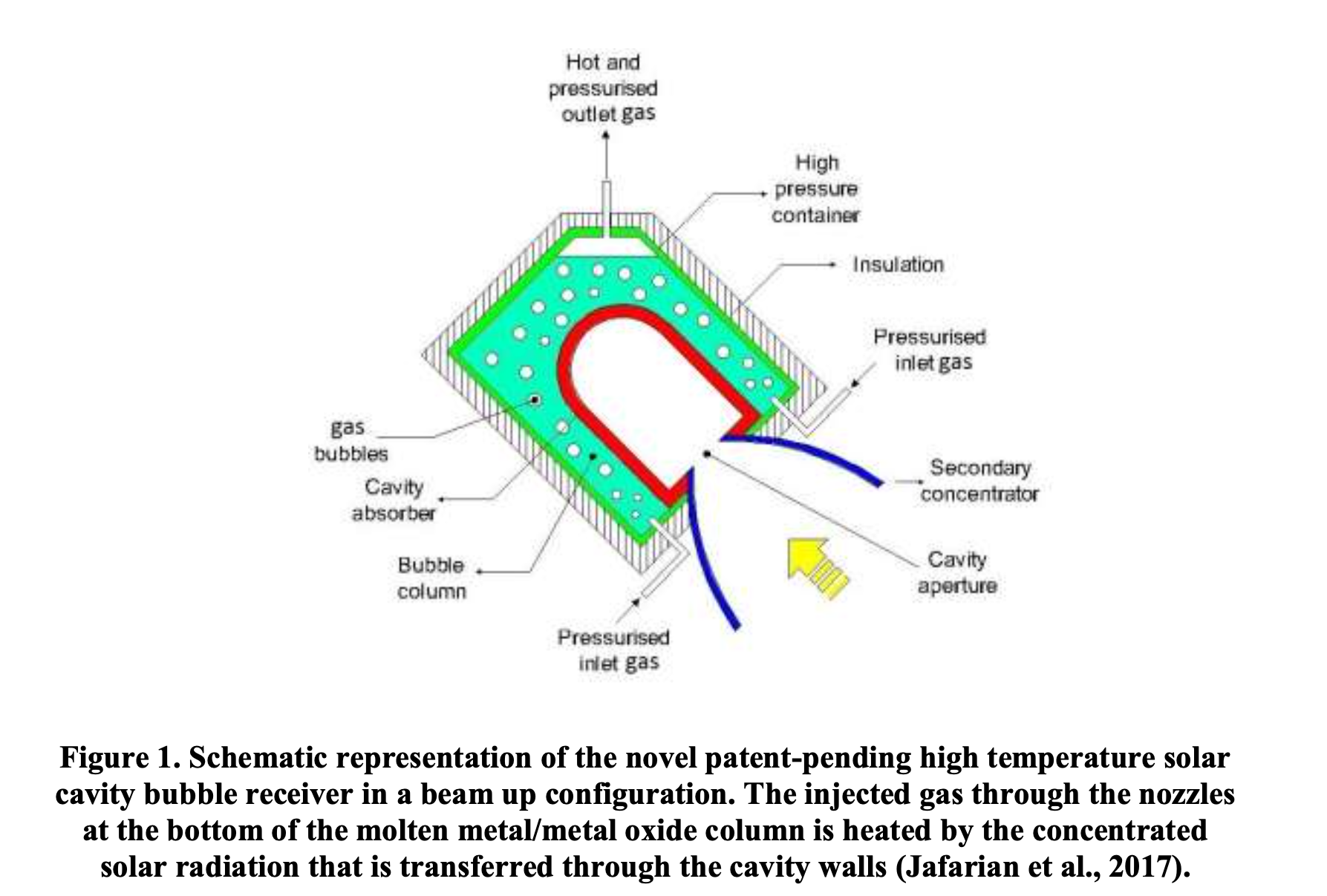 IMAGE@Mehdi Jafarian University of Adelaide, Australia, from the paper: A solar receiver with bubbling heat transfer for heating a pressurised gas

“Current assessments are mainly based on the technologies developed at DLR. But we are also working in parallel on a technology that we are developing and we think that also has great potential to further decrease the costs of producing hydrogen for the copper industry.”

Globally, the copper industry needs to ramp up fast to supply the increase in demand due to the growth of clean energy technologies, and to do so while meeting new climate targets that will require replacing fossil energy. So, with what Bloomberg projects will be an annual supply deficit of 4.7 million metric tons of copper by 2030, economic methods of refining copper that can use clean energy to provide heat will be necessary. Australian copper firms are waking up to this necessity.

As Chinnici noted: “What we are learning by working with the mining and mineral industry here is if they need something done, they will get it done.”