Eudora Energia implemented, at Cesp’s plant, a R$ 49 million project for the Concentrated Solar Power plant to start operating at the end of the month.

Before the end of January, Eudora Energia must put into operation the first solar thermal plant in Brazil. The millionaire project has 0.5 MW of power and is located at Cesp’s UHE Porto Primavera. Investments for the construction of the Concentrating Solar Power plant totaled R$ 49 million, coming from a Strategic Research and Development Program of the National Electric Energy Agency, started in 2017. 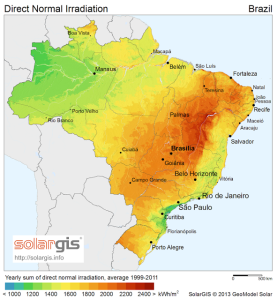 According to Eudora’s partner, Jonas Gazoli, the company started operating with this technology in 2015. The Porto Primavera solar thermal plant converts solar energy into heat, while the photovoltaic plant converts light into electricity. Large parabolic mirrors capture the sun’s rays and concentrate the energy by heating a thermal fluid. This fluid is used in a steam-generating boiler, which drives a turbine that produces electricity.

According to Jonas, this technology allows low-cost storage in a thermal environment, which is a great advantage over photovoltaic solar. At the Porto Primavera solar thermal plant, the thermal energy will be stored in a 23-meter-high tank with the fluid. “This oil is heated by the heat of the sun and is stored there. Our thermal energy is stored in the oil,” he explained. This fluid is considered non-polluting and, in the event of a leak, it is in the form of vapour.
This form of storage enables the dispatch of solar thermal technology. According to Gazoli, this is the advantage of this source: it is an intermittent source with the ability to be steady due to the control of dispatch from storage.

In addition, another of the advantages reported by the partner is that the operation of solar thermal technology can be used to increase the efficiency of thermal generation parks, biomass or steam industrial chain. “There are UTEs where the biomass efficiency is lower than the design efficiency, so we could put a solar thermal plant aside just to generate steam,” he concludes.

Jonas also reported that currently the company also has a national product of its own development, which is a heliothermal collector. This equipment is designed and manufactured by the company and is being installed at a site in Furnas, in Aparecida de Goiânia (GO). The goal is that, as of the second half of the year, the product will be available in the market for the operation of new centralized generation plants, electricity and steam generation for industry in general.
Mature and operational technology

Although the solar thermal source is dispatchable, it has a higher cost than traditional solar and does not yet present market demand, in addition to not being part of any incentive plan. Jonas Gazoli considers the Cesp plant project to be the starting signal and believes that it will open the doors to new opportunities. “We have mature and operational technology, a national product, our own engineering. Now we are in a position to start promoting the market”, he stresses.

In the rest of the world, in countries such as Spain, the United States and the Middle East, concentrated solar power is already widespread, with plants in operation. China should be the next nation to invest in the segment.

The choice of Porto Primavera was strategic, since there is a Cesp laboratory there and it is in a region of the state that is interesting for the operation of solar thermal technology.