Three of these projects belong to SolarReserve Chile, another to Elecnor and the last to Ceme 1 SpA.

Currently, the only project that will use this technology to inject electricity generation into the national system is Cerro Dominador, which executes EIG Global Energy Partners in the municipality of María Elena, in the Antofagasta Region, which includes a 110 MW thermosolar plant. installed power (which will work with a solar tower and a storage system based on molten salts) and a storage system to produce electricity with a steam turbine for 24 hours.

Estimates for the entry into operations of this project, whose total investment is US $ 1,147 million, is for May 2020, as indicated in the report prepared by Generadoras de Chile, based on data from the National Energy Commission (CNE).

The actors linked to the solar energy sector point out that once Cerro Dominador is put into operation, the possibility that other projects of this type will materialize will increase.

José Ignacio Escobar, president of the Chilean Association of Renewable Energies and Storage (Acera A.G.), affirms that «the future of the CSP is seen with good eyes. Cerro Dominador is an emblematic project for Chile and Latin America, so we hope it will be a platform for more projects of this technology to be built soon, because they provide flexibility and an important dispatch capacity, especially with a view to decarbonization and closing of thermoelectric plants. Each time we are going to need more complementary applications to be able to deliver clean energy 24/7 and technologies like CSP and geothermal are key in this transition «.

In his opinion, there are several applications of CSP that can be implemented in the country, since «not only are the towers of molten salts, but there are the parabolic cylinder plants and also Stirling engines, so attention must be paid to the development of technological innovation, its competitiveness and if they are scalable «.

The future of this technology is also highlighted by Cristián González, expert in Solar Power Concentration Technology (CSP) of the Solar Committee and Energy Innovation of Corfo, who ensures that this type of power generation is «highly competitive».

«The national electrical system requires multiple benefits, such as stability and continuity of supply, economic dispatch, inertia contribution, contribution to the control of frequency and voltage, flexibility of hour dispatch, reserve in turn, efficient starting time at full capacity and contribution to the reduction of greenhouse gases. CSP technology can provide all these benefits to the national electrical system, «he says. 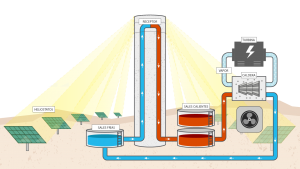 In this coincides Rodrigo Vásquez, Senior Advisor of the GIZ Energy Program in Chile: «The potential in the case of Solar Power Concentration (CSP) reaches 550 GW, and that is one of the reasons why in all the energy scenarios determined by the Long Term Energy Planning (PELP) of the Ministry of Energy of 2018 are considered to a greater or lesser extent the installation of CSP plants in the medium and long term. This means that this technology would begin to compete with current conventional energy systems based on fossil fuels. » 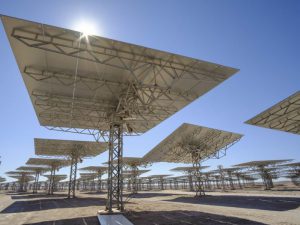 The specialist maintains that at the international level there are currently 219 solar concentration projects in the world between «development, construction and operation, which add almost 10,000 MW», highlighting the work being done in Chile to increase the incorporation of this technology in the Energy Matrix.

For José Antonio Lobo, Vice President of Development of SolarReserve for Chile and Latin America, «Chile presents exceptional conditions for the development of the CSP, with the highest direct irradiation (DNI) in the world, together with the highest atmospheric transparency, in the region of Antofagasta, and also because the resource is very close to large consumption centers, such as mining operations, which makes the price of energy that can be obtained in Chile one of the lowest in the world, considering that in Chile there are no subsidies or special tenders for technology. »

Rodrigo Vásquez mentions the work carried out by GIZ in Chile around this technology, beyond electric generation: «We have evaluated the use of CSP for the desalination and generation of solar cooling. We are also advising two Chilean manufacturing companies for the development of CSP systems and components. One of these projects is the Enerbosch Solar Tower, which won the Energy Innovator of the Year award at the Sunrise 2019 event. »

Other initiatives mentioned by the executive are the support of GIZ in Chile for the diffusion in heat generation projects, «such as the parabolic cylinder plant of Minera Centinela for the heating of the electrolyte and the Jucosol company for the concentration of grape juice».

«In the generation of capacities, we conducted a study of training demands of technicians in Chile in CSP and launched the book» Chile’s industrial potential for the development of a solar concentration industry «together with Corfo identifying Chilean manufacturing companies with capacity to attend the CSP projects «, adds Vásquez.
José Ignacio Escobar points out that, once Cerro Dominador enters operations, they could increase the facilities to finance these projects. «We hope that the banks are looking with better eyes the following projects that are appearing, once they demonstrate the qualities and benefits that this type of technology has in our electrical system».

In his opinion, banks «have seen this technology work in other countries, so financing should not be a barrier, rather we think that the challenges are mainly related to the technological and commercial issue, which should continue to develop.»

«We should see more CSP projects, considering that, if the remuneration system of Complementary Services is perfected, they could monetize part of these services, since they are technologies that operate 24/7», concludes the president of Acera A.G.

The CSP projects with approved RCA

Current status: RCA approved in May 2016