If you are keeping upwith the news, then you are aware of the quiet revolution that is taking place in the power-generation market, especially in some countries. Renewables, such as solar and wind are becoming increasingly competitive with fossil fuels, and in some countries, accounting for a larger (albeit still small) share of electricity production. Germany’s energy-transition (Energiewende) policy (published in 2010), for example, aims for a 55–60% share of renewable energy in gross electricity consumption by 2035.

Germany’s Energiewendeand other national initiatives have been a major boom for research and development (R&D) and a driver for industry to further develop wind, solar and other renewable energy technologies.

When it comes to solar energy, photovoltaic (PV) solar panels have played the dominant role for generating electricity thus far, and the fierce competition in the PV market has driven down costs (see Editor’s Page, p. 5), as well as driven some manufacturers out of business. However, there is another, less-talked about, but important solar-power technology that has been around for decades and offers a major advantage over PV and wind: concentrating solar thermal power (CSP; see sidebar below). 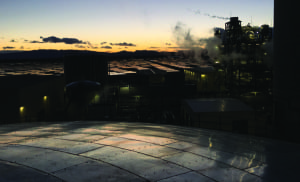 Figure 1. The Crescent Dunes CSP plant, which has been operating in Nevada since late 2015, continues to generate steam for power generation, even at night, thanks to molten-salt
technology

The main advantage of a CSP plant is that it produces grid-friendly, dispatchable electricity, says Kevin Smith, CEO at SolarReserve (Santa Monica, Calif.; www.solarreserve.com). That means electricity is produced quickly to meet the demand — the same as any conventional steam-driven turbine power plant, he says. That’s because CSP plants being built today have the ability to store large amounts of heat using molten salt technology. This ability to store thermal energy instead of storing electricity (as may be done by PV and wind generation with battery storage) has been the “holy grail,” says Smith. The electricity from a CSP is not only dispatchable, but it is dispatchable 24 hours per day (Figure 1). “No external backup fuel is required to run the plant during the night.”

SolarReserve’s tower power technology (Figure 2) uses molten salt — a mixture of sodium and potassium nitrates — as both the heat transfer fluid and as the energy storage medium. The molten salt (at 600°F; 315°C) is pumped up the tower (about 600-ft height) to the receiver, where it is heated by the concentrated sunlight to about 1,050°F (566°C). Around 60 million pounds of molten salt is stored in stainless-steel tanks, which are insulated so that virually all of the heat can be available when needed for making steam.

Figure 2. This diagram shows the principles of operation of a tower CSP plant with energy storage

The company’s first commercial unit — the 110-MW Crescent Dunes project in Tonopah, Nevada — started up in late 2015, and won Power magazine’s plant of the year award last year. Since then, SolarReserve has a number of new plants in the works, including a 100-MW tower CSP for the Redstone project in Postmasburg, South Africa, which will use molten salt technology for 12 h of storage when operational in 2018.

The use of molten salt technology in tower CSP plants was pioneered by Torresol Energy S.A. (Madrid, Spain; www.torresolenergy.com), with its first commercial plant — the 19.9-MW Gemasolar CSP plant in Seville, Spain — that was commissioned in 2011. That plant’s molten salt storage tank permits up to 15 h of electricity generation without any solar feed. 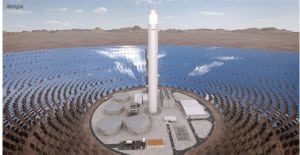 Figure 3. Abengoa is developing South America’s first CSP plant in Chile. The plant will use an advanced storage system enabling it to generate electricity for up to 17.5 h without direct solar radiation

Other companies, including Abengoa (Seville, Spain, www.abengoa.com) and BrightSource Energy (Oakland, Calif.; www.brightsourceenergy.com) offer CSP technology with molten salt storage. For example, Abengoa is constructing a 110-MW CSP plant in the Atacama Desert, Chile that will use a heated-steam CSP tower and molten salt technology for up to 17.5 h of thermal energy storage (Figure 3). The company has also developed this energy storage system in one of the world’s largest parabolic trough CSP plants in Solana, Arizona, with a total capacity of 280 MW and 6-h storage capacity, which started up in 2013.

Despite its advantages over PV and wind generation, a CSP plant with energy storage is still very expensive, and there is now a major push to reduce costs. For example, in 2011, the U.S. Dept. of Energy (DOE; Washington, D.C.; www.energy.gov) launched its Sunshot program (https://energy.gov/eere/sunshot/sunshot-initiative), which is targeting a levelized cost of electricity (LCOE) for CSP at $0.06/kWh (unsubsidized) by 2020, which represents a 70% reduction from the 2010 baseline.

Already, experience gained from operating CSP plants has led to cost reductions. For example, in a tower CSP plant, the heliostat field can account for about 50% of the investment costs. But thanks to design refinements to enable more efficient capture of light, improved accuracy of the mirrors, better drives and wireless technology, “we have been able to cut the costs of heliostats by 30–40%,” says SolarReserve’s Smith. “Because we are always making improvements, the cost of our second plant in South Africa is about 25% less expensive than our first CSP in Nevada,” he says.

BrightSource Energy’s senior vice president of marketing and government affairs Joe Desmond agrees that “there have been advances in all areas of solar thermal systems, including thermal technology, receiver design and heliostat design, to name a few.” The company’s fourth-generation technologies, which are being implemented in the 121-MW Ashalim Solar Thermal Power Station, located in Israel’s Negev desert, include a new heliostat design with fewer components and easier assembly that improves performance and lowers costs, explains Desmond. “The latest design measures 4  5.2 m — 25% larger compared to Ivanpah.” Wireless field communication and control — a first for the CSP industry — is another innovation, he says. At Ashalim, each of the 50,600 heliostats positioned in the 3.15-km2 solar field will communicate wirelessly with the company’s solar field integrated control system (SFINCS). “The wireless system reduces cabling by as much as 85% in the solar field, reducing costs and accelerating the construction schedule,” he says.

Another cost-saving measure is the use of dry (or air) cooling. In thermal steam systems, the superheated steam inside the boiler pipes must be cooled and condensed back into water in a closed-loop system. Dry cooling uses an air-cooled condenser comprising many large fans to circulate air over the pipes to cool and condense the steam. In contrast, a wet cooling system circulates water across the pipes, which can lead to large water demands.

All CSP plants being bid today utilize dry cooling, which uses 95% less water than traditional wet-cooling technologies, say Desmond. For example, the Ivanpah Solar Electric Generating System utilizes dry cooling. “Located in California’s Mojave desert, Ivanpah uses 50 acre-feet of water annually, which is equal to the amount of water consumed annually at one hole of the golf course located next to the facility,” he says.

In power generation, operation at higher temperatures can mean higher efficiencies. This is also true with CSP plants. For this reason, SolarReserve, for example, is working on an advanced tower-receiver design that can operate at 1,400–1,500°F (760–816°C), says Smith.

Parabolic trough technology uses oil-based synthetic heat-transfer fluids (HTFs) that are limited to 400°C. As a result, storage temperatures for trough CSP plants range between 280–400°C, compared to over 550°C for tower plants. To overcome this barrier, the German Aerospace Center (DLR; Cologne, Germany; www.dlr.de) is involved in a number of projects. For example, a recent study (published in ScienceDirect in 2015) concluded that a new silicon-based HTF — Helisol from Wacker Chemie AG (Munich, Germany; www.wacker.com) — forms less low-boiling and gaseous compounds at 425°C compared with currently applied HTFs at 400°C. A techno-economic comparison showed that the LCOE can be reduced by 5% using silicone fluids.

Last summer, a two-year, DLR-led international project began with the aim to demonstrate the use of molten salts in parabolic-trough CSP plants. “Depending on the salt mixture, upper process temperatures of up to 550°C are possible,” says project manager Michael Wittmann from DLR’s Institute for Solar Research, Line Focus Systems. As part of this project, a demonstration plant will start up later this fall in Èvora, Portugal. The plant will have a thermal capacity of 2.2 MW (one full loop with four parabolic trough collectors) plus a steam generator capable of delivering 1.6 MW, says Wittmann. “This is the just-before-market scale,” he says.

Among the partners, TSK Flagsol Engineering GmbH (Cologne, Germany; www.flagsol.com) will adapt the design of its Helio Trough collector and demonstrate its applicability. Steinmüller Engineering GmbH (Gummersbach, Germany; www.steinmueller.com) will install and test its once-through steam generator, heated with molten salt. The once-through design allows superheatedsteam parameters for commercial application. Wittmann says the molten salt technology has the potential to reduce the costs of a trough CSP plant by up to 33%. 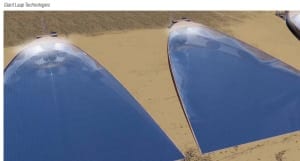 Meanwhile, Mitsubishi Hitachi Power Systems, Ltd (MHPS; Yokohama, Japan; www.mhps.com) is scheduled to complete verification testing this month on its new sunlight and thermal collecting system, which started last August at the company’s Yokohama Works. The proprietary design is a hybrid system that combines a low-temperature Fresnel evaporator and a tower-type superheater that uses heliostats. This design enables the production of higher-temperature steam at lower cost compared to conventional CSP systems. In this configuration, about 70% of all concentrated sunlight is collected by the Fresnel evaporator — which is low in cost — to make steam at 300°C. The remainder of the sunlight is collected by the super heater, which will increase the temperature of the steam to 550°C.

Another interesting development (among many others) is a DOE Sunshot Initiative that began last July at Lawrence Livermore National Laboratory (LLNL; Calif.; www.llnl.gov), in collaboration with Giant Leap Technologies (GLT; Richmond, Calif.; www.giant-leap-tech.com). The so-called Collects project aims to further develop GLT’s Digital Glass technology (Figure 4) as a new way to harvest sunlight. Digital Glass has the ability to replace today’s heliostats with thin, transparent panels using a fraction of today’s materials, while also drastically reducing the area needed for solar power plants by a factor of five to ten for the same energy harvest, says LLNL.