The future of concentrated solar power

The future of concentrated solar power

We speak to Hyperlight Energy to learn how concentrated solar power’s efficient and flexible characteristics could aid in the energy transition.

As photovoltaic solar production grows around the world, concentrated solar power has historically been left behind. JP Casey speaks to John King of Hyperlight Energy, to learn how the latter’s efficient and flexible characteristics could aid in the world’s clean energy transition. 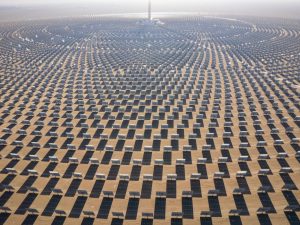 The development of concentrated solar power has stalled in favour of photovoltaic cells, but it still offers opportunities. Credit: Darmau Lee.

Solar power, alongside wind, is something of a poster child for renewable power, and with images of rooftop-mounted panels and swathes of undeveloped land covered in solar farms a mainstay of energy writing, it is easy to see why. Solar has enjoyed decades of consistent growth, with Our World In Data reporting that from the first recorded instance of solar power in 1983, to its most recent figures in 2020, global electricity consumption from solar sources passed 2,000TWh.

Still, solar power is not a one-size-fits-all practice – as evidenced by the difference between rooftop panels and utility-scale plants – and perhaps the greatest variance within the sector is between photovoltaic (PV) panels and concentrated solar power (CSP). Simply put, CSP uses mirrors to concentrate the sun’s rays to particular points on solar panels, dramatically improving the efficiency of the practice, at the cost of additional manufacturing complexity at the beginning of the construction process.

Yet CSP has been historically under-utilised compared to its more conventional cousin, PV. University College London reported that by the end of 2014, there was more than 140GW of PV capacity installed around the world, compared to just 5GW of CSP. With high-profile failures and industrial caution urging investors to stay away from high-reward CSP practices, will the future of solar power remain dominated by PV systems?

One company pushing back against this imbalance is Hyperlight Energy, an American firm whose work includes the Hylux solar steam technology and that has already received a $5.4m grant from the California Energy Commission to develop CSP solutions in the state.

“For utility scale, [a solar photovoltaic panel] will go on many 100-acre or 100-hectare deployments,” explains Hyperlight CEO and founder John King, who remains keenly aware of the imbalance in the solar sector. “Then it connects directly to the grid and provides electric power, so the photovoltaic effect is native electric, photons moving electrons. CSP, over the last decade and a half, has not been as widely deployed.”

“It has advantages and disadvantages, [including] concentration, where you are using mirrors instead of PV panels, a silicon-based technology,” King continues, going into detail about the role of the mirrors in CSP. “Mirrors bounce the photons and aim them all on a common target, so that’s where you get concentrated, and that target gets very hot. I like to say it’s just like a kid using a magnifying glass to burn a hole in a leaf. When you concentrate sunlight, it’s very powerful.”

Despite what may or may not be common assumptions about the high start-up costs of CSP facilities, King is optimistic that the improved efficiency of the CSP process can yield dividends in the long-term. This is particularly significant considering the inherent inefficiencies associated with PV technology.

A combination of technological limitations and the inflexibility of a system that does not move as the sun moves has combined to create solar panels whose efficiency often hovers around 20%, with the most efficient panels for home use boasting efficiencies of just 22%.

“For PV panels, you’re just capturing the visible portion of the spectrum,” says King, who notes that the relative maturity of technologies such as mirrors further improves the economic efficiency of the entire CSP project. “About half the energy in sunlight is visible and about half is infrared, which is heat, and PV only gets the visible. When you’re bouncing photons, you bounce all over them.

“You have about twice the energy capture possible per unit of surface area, and the surface area you’re using to get the photons is cheaper.”

Of course, there are reasons for the relatively under-developed CSP sector, beginning with the logistical and manufacturing challenges associated with a technology predicated on tracking and responding to the sun’s movements.

“If you’re aiming and the sun moves, your reflection is off, so you have to move,” says King. “These giant reflectors are like aeroplane wings; a single gust of wind gives lift and will knock you off of alignment. So you have these very complicated, expensive metal structures to make sure that doesn’t happen, and so that eats into your cost advantage.

“Picture a 95m² mirror on a pedestal. That’s an enormous amount of lift, that’s the size of an aeroplane. You can lift jumbo jets in the air with that much lift, that’s how much lift we’re talking.”

There is also something of an unfavourable reputation tarnishing the idea of CSP, especially in the US, thanks to the publication of the ‘Concentrating Solar Power Best Practices Study’ in 2020. The report, led by the National Renewable Energy Lab, compiled feedback from representatives from around 80% of the world’s operating CSP plants, and found 1,008 technological and operational issues associated with these projects.

In fairness, the report’s introduction notes that its authors are confident “that future tower and trough plants can be built on time and within budget and will perform as expected”, but the range of problems identified will do little to encourage greater adoption of a technology that is already under-utilised. Similarly, the high-profile failure of the Crescent Dunes facility in the US state of Nevada, where leaks to molten salt tanks caused the facility’s production to drop to as low as 3% of its total capacity, raised questions about the economic and productive viability of large-scale CSP plants.

“You’re chasing economies of scale,” says King, pointing out how the pursuit of large-scale production can lead to similarly large-scale issues. “So what everybody in the industry, except us, did was they would build a 500KW pilot design, and then go raise $100m, a billion dollars to then build a multi-100MW plant.”

CSP does offer one distinctive advantage over PV, however, and this is a benefit that also extends beyond most other forms of renewable power: its use of heat. In 2018, the International Energy Agency reported that heat makes up two-thirds of the energy demand of the world’s industries.

The production of this heat accounts for one-fifth of the world’s total energy consumption, meaning that securing a reliable and clean source of heat could make a significant difference to the world’s carbon footprint.

King also pointed towards the flexibility of CSP infrastructure as a potential benefit, not just for CSP but the energy industry as a whole. The need to construct CSP facilities alongside other power plants or energy facilities, and the fact that CSP produces both heat and electricity, means that CSP can work in tandem with a range of other energy sources, helping to both generate power on its own, and decarbonise other energy industries.

“I think in the future, one of the things that could happen, and that I hope does happen, is the infrastructure we’ve put in place, and if others put in place too, the oil patch, California, could be leveraged going forward,” explains King.

“You might get the mirrors in place to generate the steam, to go downhole and get the oil out. [Eventually] the well runs dry and then you’re out of oil; that’s probably going to happen on a timeframe where you still have a lot of useful life on the solar equipment.

“So I could see a world in which you say ‘well, the solar equipment is long since paid for, let’s build a power plant and keep it in service and do some green power type of thing’.”

He also pointed to the work of Ørsted, which became an excellent example of decarbonising industry by shifting its business from 85% oil and gas to 85% offshore wind in a decade. With time to achieve the world’s

climate goals quickly running out, and many climate challenges taking on a complex, multi-faceted nature, perhaps the flexible elements of CSP could help accelerate its adoption in the future.