Molten salt, which is produced by companies such as BASF, is being used in concentrating solar power plants to provide efficient thermal energy storage and is part of the overall solution to the question of the viability of renewable energy in the fight against climate change. 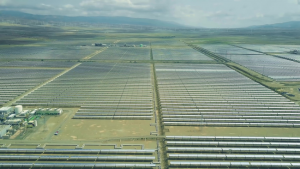 Mirrors made of polished bronze or copper plates were produced in Egypt. These helped to illuminate dark places and were also used to concentrate sunlight to heat water.

The world’s first large solar plant was developed in Maadi, Egypt, by German-American engineer Frank Shurman. The capacity of this plant was 45 kilowatts.

In Sant’Illario, Italy, the first concentrating solar power system was designed and developed by Giovanni Francia. This design laid the groundwork for modern-day solar thermal power plants with a central heat exchanger in the middle of a vast array of solar collectors.

In a project jointly developed by nine countries, a solar thermal demonstration plant was established at the Plataforma Solar de Almeria solar research center in Spain.

In a significant development in the field, Solar Energy Generating Systems (SEGS) in California, US, was the first to develop commercially viable solar thermal plants. In total, 310 megawatts of power were generated across the sites.

Ivanpah was connected to the grid in California. This single solar energy project can generate up to 392 MW.

The Noor Solar Complex in Morocco, 10km NE of Ouarzazate, opened. It promises to become a new front runner in the field of solar energy plants with a capacity of over 500 MW when all stages are complete.

One of the main technical issues that face solar power generation is heat storage. Energy needs to be stored for periods where production is low, but demand remains. This can either be at night or in seasons where sunlight is less prevalent, such as winter.

Many different solutions that can be used include heat storage in tanks and rock caverns, concrete, hot rocks, electric thermal storage heaters, and peak shaving. Another recent technological development is the miscibility gap alloy (MGA), which has not yet been implemented on a commercial scale. These methods vary economically and in efficiency and are used to varying degrees in different countries.

Molten salt represents a viable, proven, and highly efficient form of heat storage that can be used in solar power plants. By using different eutectic salt mixtures, energy can be stored and released when there is demand.

When the electricity is needed, the hot molten salt can be pumped to a steam generator where superheated steam is produced to drive a turbine/generator apparatus. Under this design, to drive a 100-megawatt turbine for 4 hours, a 30 ft x 79 ft tank is needed.

Such systems can achieve a high degree of efficiency. In 2006, there was an estimated annual efficiency of 99% and the Gemasolar Themosolar solar energy project in Spain produced electricity continuously for 36 days.

Inaugurated in 2016 at a construction cost of $2.5 billion, German chemical conglomerate BASF’s solar energy project Noor 1 has been generating vast amounts of power in the Moroccan desert, suppling one million households with electricity.  The complex draws and cools water from the El Mansour Eddahbi Dam and Reservoir.

Extending across 30 km2, the project comprises 537,000 computer-controlled parabolic mirrors, which continuously turn to face the sun. This concentrates the solar energy and converts it to power. Thermal oil circulates in the middle run pipes (which can be heated to around 740 °F) and is fed to the two large thermal storage tanks, where a mixture of potassium and sodium nitrate molten salts store heat, which can be released when needed.

Massive amounts of salt mixtures are required to keep the plant running at peak efficiency. BASF has produced more than 27,000 metric tons of sodium nitrate at their plant in Ludwigshafen for the Noor facility alone. BASF is no stranger to the production of high-quality synthetic sodium salts and has been producing them for more than 90 years.

It is not just about technological advances and industry, however. The Noor Complex is helping to provide jobs and investment in Morocco, a country that has 22.2% unemployment in the 15-24 age group (2016 figures), according to the CIA Factbook.

Morocco is located in the «sunbelt», which is between 40° either side of the equator. This means that with solar energy plants such as the Noor Complex being installed in these countries by companies such as BASF, 32 million cubic tons of CO2 can be saved, representing a serious dent in greenhouse gas emissions globally.

A recent study by the IEA, Greenpeace, and ESTELA found that the use of the technology could create 70,000 new jobs and $16 billion worth of investment in the future.

The Future of the Noor Complex

Solar energy projects have huge potential for reducing global greenhouse gas emissions as well as providing jobs and investment well into the next century. The Noor Complex is part of this overall shift in our approach to heating and powering the world’s homes and businesses.

Innovative solutions, including molten-salt energy storage (MSES) by forward-thinking companies such as BASF, are helping to make this technology future-proof in a world that is already being fundamentally altered by the pressing issue of human-made climate change.

Click here to find out more about different materials science equipment available on the market.

Biello, D (2009) How to Use Solar Energy at Night [Online] Scientific American. Available at: https://www.scientificamerican.com/article/how-to-use-solar-energy-at-night/ (Accessed on 8 April 2020).

Reg Davey is a freelance copywriter and editor based in Nottingham in the United Kingdom. Writing for News Medical represents the coming together of various interests and fields he has been interested and involved in over the years, including Microbiology, Biomedical Sciences, and Environmental Science.