Thermal Storage Gets More Solar Power on the Grid

Thermal Storage Gets More Solar Power on the Grid

To the rescue comes concentrating solar power (CSP), a technology being tested and deployed by utilities in America’s deserts and southern Spain.

Peak demand for electricity in the United States typically hits between 4 p.m. and 8 p.m., which doesn’t quite line up with the sun’s schedule. It’s fortunate that the sun is high in the sky during many of the hours when the air conditioning is in demand. But in summer, people tend to need air conditioning during the dinner hour and beyond, when kitchen appliances are whirring, lights are on, and TVs are blaring.

To the rescue comes concentrating solar power (CSP), a technology being tested and deployed by utilities in America’s deserts and southern Spain.

New analysis at the U.S. Department of Energy’s (DOE) National Renewable Energy Laboratory (NREL) has found that CSP, with its greater grid flexibility and ability to store energy for as long as 15 hours, can enhance total solar power generation and actually give photovoltaic (PV) systems a greater presence on the grid.

PV panels convert photons from the sun directly into electrons for electricity — and are grabbing real estate on rooftops across the Americas, Europe, and Asia. 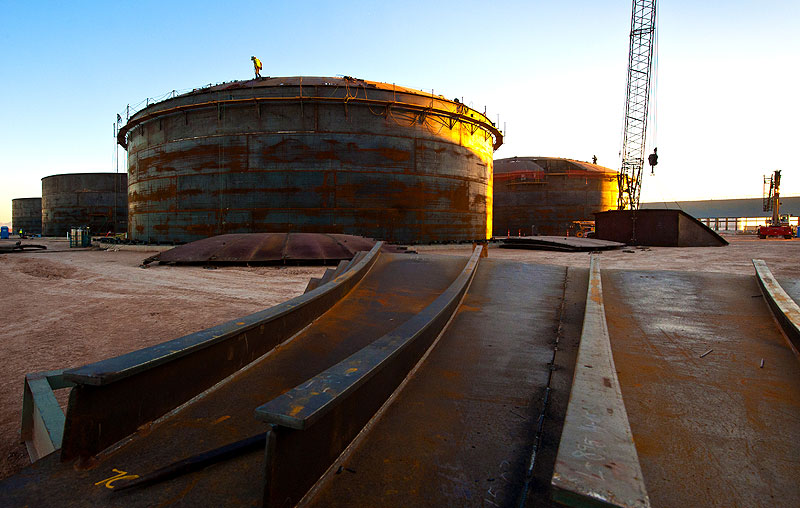 The tanks that hold the molten salts at Abengoa’s Solana Plant are enormous. The salts can keep the solar-heated fluids very hot for several hours, so they can be transferred to turbines to produce electricity even when the sun isn’t shining.
Credit: Dennis Schroeder

CSP technologies use mirrors to reflect and concentrate sunlight onto receivers that collect the sun’s heat. This thermal energy can then be used to drive a steam turbine that produces electricity for utilities.

Like Edison and Tesla or Dempsey and Tunney, the two major solar energy technologies never meant to play nice. Each had its niche — and its dreams of market share.

But that’s changing, said NREL analyst Paul Denholm, co-author with Mark Mehos of the study "Enabling Greater Penetration of Solar Power via Use of CSP with Thermal Energy Storage

Think of power from PV as a roller coaster of highs and lows, and power from CSP, via thermal energy storage, as a gently rolling train.

PV panels and wind turbines contribute electricity to the grid, but without the ability to store that power, they cannot supply the grid after the sun sets, or after the wind dies. Even passing clouds can cause drops in the amount of solar energy that gets on the grid.

Large fossil-fueled and nuclear power plants can’t be quickly stopped or started to accommodate variable energy sources such as solar and wind energy.

CSP can even out these ebbs and flows because it can store power and ramp up output when the amount of direct wind or solar power drops.

"It all gets down to grid flexibility," Denholm said. "What sets of grid technologies do you deploy to make the grid respond faster and over a greater range to the input of variable energy such as solar and wind?

"If you can’t respond quickly, you end up potentially throwing away wind and solar energy.

"We know that the more wind and solar you add to the grid, the harder it is to balance the grid and maintain reliability."

A CSP plant works by heating a heat transfer fluid that is used to boil water to make steam. But because of thermal inertia, by the time that fluid gets through the system’s pipes to the power plant, perhaps 10 or 15 minutes have passed.

When a cloud passes over a PV panel, the drop in energy production is immediate. But because of the 10 or 15 minutes of thermal inertia, a cloud passing over a CSP tower doesn’t cause this immediate drop. Nor is there the immediate surge when sunlight returns.

"The change is more gradual," Denholm said. "That’s one reason CSP can bring a greater quality to the grid."

Still, the greater potential for CSP — and for CSP helping PV to expand its role on the grid — is its capacity to store the energy it captures from the sun for several hours, making it a source of reliable energy after the sun sets.

"CSP can fill in that gap in the evening when there’s peak demand for electricity," Denholm said. "Together, the solar resource can provide all that peak demand. And together they can reduce or eliminate the need to build new power plants for those peak periods."

Thermal energy storage at CSP plants "is low-cost because it’s not exotic," Denholm said. "It’s some large tanks with some media to store energy before you use it to boil the water." The best medium for storage available today is molten salt, NREL’s Greg Glatzmaier said.

Molten salts are abundant and not very costly. They behave themselves, neither decomposing nor volatizing at the high temperature needed in a CSP plant — about 565 degrees Celsius (°C).

At a typical molten-salt CSP plant, the salts are stored in two tanks, one much hotter than the other.

The salt is pumped from the "cold" tank to the power tower, where it collects the solar energy that’s focused on the receiver, raising its average temperature. The salts then descend into the "hot" tank, where they can maintain this very hot temperature for several days, though typically they are used within hours.

The salt in the hot tank is then sent to a heat exchanger that generates the steam needed to turn the turbines at a power plant. The turbines generate electricity that goes to homes and businesses.

As they exit the steam generator, the salts cool, and by the time they return to the cold tank, they measure at about 293°C.

When the sun is shining, the CSP plant can take the salts out of the cold tank, heat them up at the tower’s receiver, and then dump them into the hot tank for storage, Glatzmaier said. "If you come to the end of the day and the hot tank is pretty full, you can keep generating electricity by withdrawing the salts from the hot tank to generate steam."

It’s a continual balancing act. If all the salt is in the cold tank, no stored energy is available. If it’s all in the hot tank, there’s plenty of energy stored for later use, but nothing to replenish the system.

Abengoa Solar is building a 250-megawatt CSP plant near Gila Bend, Ariz., that will cover 1,900 acres and use 900,000 mirrors to direct sunlight to heat a working fluid inside its tubes. The plant’s six hours of thermal storage mean it can deliver electricity after the sun sets to approximately 70,000 homes.

The 19.9-megawatt power tower run by Gemasolar near Granada in southern Spain is configured to store enough energy during the summer to provide solar-generated electricity 24 hours a day, Glatzmaier said. In the winter, when there’s less sunshine, electricity comes from more conventional sources a few hours each day. The system aims to power 25,000 homes and reduce carbon dioxide emissions by more than 30,000 tons a year.

SolarReserve is building the 110-megawatt Crescent Dunes Solar Energy Project near Tonopah, Nev., which will use molten salt to store the sun’s energy as heat for several hours. It will include more than 17,000 mirrors to focus the sun’s light on a tower 640 feet high.

BrightSource is building an even larger CSP project in the Mojave Desert near Needles, Calif., that will have storage for just a couple of hours a day — but this will be enough to serve more than 140,000 homes during peak hours. Company executives say the plant will reduce carbon dioxide emissions by more than 400,000 tons per year.

The cost of PV has been plummeting, and it has a cost advantage over CSP. But CSP has the advantage of storage, and so teamed with PV can improve the benefits and bottom lines of both technologies. Storage does raise the price of a CSP plant, but "if you’re running your turbine more hours in a day, you’re amortizing your turbine cost over more generation time, and there’s a real cost benefit there," Glatzmaier said. The bottom line: when storage is added to a CSP plant, it increases the value of its electricity — both its energy value and its capacity value.

Solar plants also can store energy in batteries, but at least for now, that approach is quite expensive. Other thermal storage technologies being investigated by researchers include phase-change or thermal-chemical storage.

Denholm and Mehos caution that the preliminary analysis in their study will require more advanced grid simulations to verify the actual ability of CSP to help wind and PV gain a larger presence on the grid. An important next step, they say, would be more complete simulations using utility-grade software. That will answer questions on the realistic performance of the generation fleet, transmission constraints, and actual CSP operations.