The world’s largest concentrated solar power (CSP) plant has continued to receive accolades from around the globe.

It’s been nine months since Ivanpah celebrated its grand opening in February, 2014. Since that time, the world’s largest concentrating solar power plant has continued to receive accolades from around the globe, including being named Plant of the Year by Power Magazine, the first time a renewable energy project has ever received that honor in in more than 40 years.

But because of its high profile nature – Ivanpah is the largest of its kind in the world and the largest project to benefit from DOE’s successful Loan Guarantee Program – it remains the subject of close scrutiny by the press and other stakeholders who may not necessarily agree with the policies that helped make it possible. We get that.

Sometimes, however, certain stories are so far off the mark, that we turn to this blog to set the record straight and speak truth to power (as the saying goes), by relying on facts, science and law.

The latest attack on clean energy comes courtesy of Fox News claiming (disingenuously) that the Ivanpah project is now seeking a grant to pay off its loan. What Fox conveniently leaves out of their story is the fact that this so called “grant” is not a grant in the traditional sense at all. Rather, it is the 30% Investment Tax Credit (ITC) – authorized by Congress – for which the project is eligible now that it is operating.

What’s more, under the terms of DOE’s loan guarantee, Ivanpah is required by the Federal Government to use the tax credit proceeds (what Fox calls a “grant”) to immediately pay down the outstanding loan balance, which is in the best interests of protecting taxpayers.

So to put things in context, here are five things some media can’t seem to remember about Ivanpah.

#1: The Ivanpah Project is Meeting Expectations
Ivanpah is not only a new plant, but the first of its kind at this scale. A multi-year performance “learning curve” has always been assumed since the earliest stages of planning and is typical for opening a major utility-scale power plant of any kind.

Recently, Ivanpah’s performance expectations have been questioned based on a review of publicly-filed generation data (available on the EIA website) for various solar power plants.  Unfortunately, the concern is based on incomplete information regarding the plant’s contractual performance obligations; it compared a mature year against a partial start up and optimization performance period in Year 1.

Ivanpah’s performance obligation is an annual target, not monthly, and is measured on a cumulative basis. On an aggregate basis, for the month of September, we are above the cumulative annual guaranteed level. The annual expected generation noted by some in the media is for the mature year performance, which will occur at the 4-year mark of plant operations in 2018.

2)  Ivanpah is complying with requirements of the DOE Loan Guarantee Program – Project owners NRG, Google and BrightSource are operating within the structure of the DOE Loan guarantee program as it was designed. Contrary to how it has been characterized in the press, the 1603 Treasury Grant program built upon on and was designed to enhance existing policy – the bipartisan Investment Tax Credit (ITC).  The ITC was enacted as part of the Energy Policy Act of 2005 and then, in 2008, was extended by President George W. Bush to run through 2016.

The 1603 program was enacted to address challenges in the tax equity markets following the 2008 financial collapse. It has proven to be an efficient finance mechanism that allowed taxpayers and small businesses to maximize the return and value of current tax policy by enabling access to additional sources of lower cost private capital.

Under Section 48 of the Internal Revenue Code, qualified commercial energy projects – solar, fuel cells, and small wind projects, as well as geothermal, microturbines, and combined heat and power projects – are eligible for a credit equal to 30% of the project’s qualifying costs. The 1603 program simply allowed these same projects to elect a cash grant of equivalent value. Ivanpah has submitted its application to receive its eligible tax credit.

More importantly, under the terms of its DOE Loan, Ivanpah is required to use this tax credit to repay the guaranteed loan with interest. This is why a DOE officials said the project is in "good standing" with the department. You can get more details on the specifics of the DOE Loan Guarantee and the 1603 program HERE.

In fact, according to a new report released this month, the DOE is projecting that taxpayers will earn $5 billion in interest payments as these loan guarantee projects are paid back.

BrightSource first applied for a loan guarantee in 2006 and achieved financial close of the loan in April 2011. The DOE spent over four years thoroughly reviewing the project. To be perfectly clear, we did urge the government to make a decision on our loan guarantee application.  We spoke to anybody who would listen about this great project – the largest and most technologically advanced of its kind in the world.  The project was completely consistent with Congress’ intention when it established the loan guarantee program – to support the commercialization of technically innovative projects.

The DOE was extremely thorough and diligent in its review, as were the other agencies involved in the process.  The level of scrutiny on the project was comparable to that which would have been applied in a commercial bank financing.  Confirming the DOE’s judgment, NRG and Google independently decided to invest a total of $468 million to purchase a majority ownership interest in the project, also based on the same merits.  HERE is more information on our approach with DOE during the Loan Guarantee process and a detailed timeline of activities.

3) Ivanpah’s impact on Birds is Minimal, But Also a Priority – No one disputes that certain levels of concentrated solar flux present a risk to birds. The U.S. Fish and Wildlife Service has worked closely with Ivanpah examining the causes of bird mortality during a structured, well-designed post-construction study.  While some have exaggerated claims about bird impacts, in fact, Ivanpah reported only 321 avian fatalities in this post construction analysis between January and June 2014, of which 133 were related to solar flux.  When considering the impact our technology has on birds passing through the concentrated sunlight, or solar flux, it is important to keep in mind the leading annual causes of bird deaths include 1.4-3.7 billion birds being killed by cats, as many as 980 million birds crash into buildings, 174 million birds die from power lines and up to 340 million birds perish from vehicles/roads.  Ivanpah is committed to minimizing avian impacts at the projects utilizing our technology, including using technologically-advanced cameras, radars and audio systems to assist in detecting, monitoring and deterring bird movement in and around solar facilities.  Here is a full analysis setting the record straight on the bird impacts and mitigation and detailed research on solar flux science.

4) We Don’t Control the Weather – Weather is variable, and the weather this year at Ivanpah has generally been substantially worse than projected on a historical average basis, resulting in reduced output for certain months. In fact, the amount of sun for 2014 has been about 9% below predicted and wind events were more frequent than that predicted by the historical data.

In the planning for the Ivanpah project, 12 years of historical satellite data, many years of recorded insolation data for various sites in the Mojave Desert, and one year of ground measurements at the site were used to assess the site’s Direct Normal Insolation, or “DNI”. Moreover, more than 4 years of weather data have been gathered from an on-site weather station.

We remain confident that over time, the sun at Ivanpah will be more than sufficient for the plant to meet its expected performance targets.

5) Natural Gas is Used to Maximize Renewable Energy Generation in Accordance with State Law – During the startup and commissioning process, the plant operators have increased their understanding of plant operations, including the prudent use of natural gas for safe and reliable operation of the solar receiver and steam turbine. 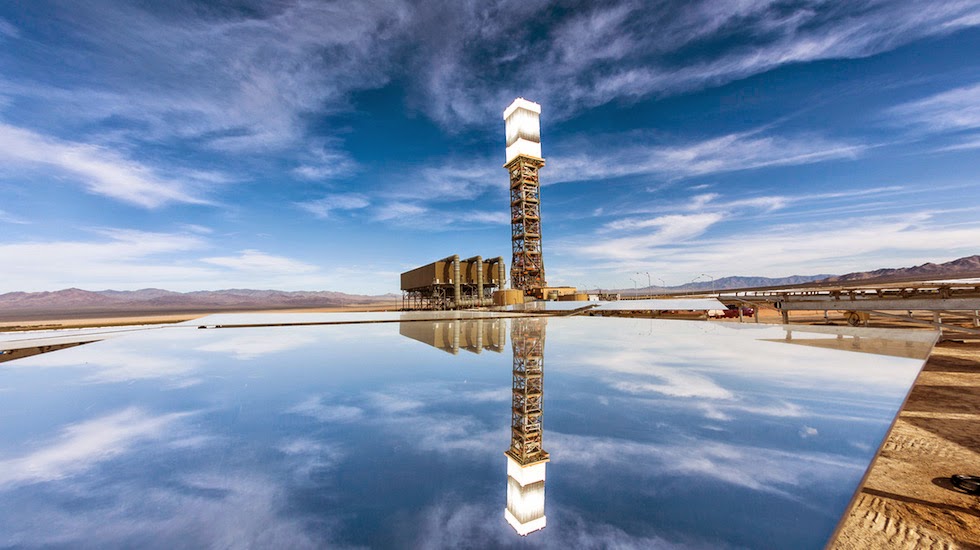 This type of use of natural gas can at times produce nominal generation, though its primary use is to optimize the amount of electricity produced from the sun by preparing the facility each day to utilize the solar resource as soon as practically possible, and safely.

The California Legislature recognized the benefit of using a small amount of natural gas to maximize renewable energy production in its analysis of AB 1954 (Skinner), signed into law by Governor Brown in 2010:

Ivanpah filed for amendment to increase natural gas usage for this purpose and the amendment was granted by the Energy Commission. The project’s use of natural gas remains within the de minimus requirement as defined by the renewable portfolio standard (RPS) to be considered RPS-eligible delivered electricity.