China Three Gorges Renewables – the developer and builder of the 22.5 GW Three Gorges Dam in China – will develop three of China’s planned new 100 MW Concentrated Solar Power (CSP) tower projects, two in China’s sunny Qinghai province, teaming up with new private CSP developer Shouhang in one of these, and one in Gansu Province. The massive hydropower developer is among large Chinese state-owned coal, nuclear and hydropower firms embarking on gigawatt-scale renewable projects that were revealed to SolarPACES in an interview with Sunny Sun, founder of the CSP site CSPFocus. 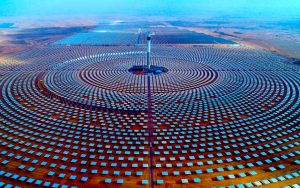 Sun noted that China’s new round will set a market referent price – derived from the coal price in each province, which varies – it is cheaper in Gansu Province than in Qinghai Province, for example. This coal price benchmark price is equivalent to around 5 cents/kWh.

So instead of proposing 100 MW CSP projects on their own, China’s large state-owned energy developers are proposing multi-renewable projects that add up to several gigawatts in total, that combine CSP with storage with PV and wind, that have already been scaled and are now the cheapest in the world with fully developed supply chains. CSP is not yet in that position in China, but is on its way as a result of the initial completed round of pilot CSP projects that are now operating.

Sun believes that if all these new projects get up and running over the 20 year contract, that will create an entire Chinese supply chain for CSP and reduce its costs.

“The problem of CSP is we do not have many projects in operation yet,” he said. “We only started 20 pilot projects and only half of them got built. Now I think we have the capability, but we don’t have the economy of scale yet.”

As can be seen in the NREL listings of global CSP projects for SolarPACES, China has begun this local supply chain for CSP. Almost all of the listed suppliers of standard power block items like generators, and even to a lesser extent, even the solar components like heliostats, are Chinese firms.

Although the two-year deadline is really tight, Sun pointed out that these new projects he revealed to SolarPACES were already under preparation several years ago, and had the necessary permissions in terms of land, environment, and even financing arrangements, before submitting the bids and winning these auctions. All of these projects must complete the construction and installation and connect to the grid at full load within two years.

“It’s different from China from West,” he explained. “Maybe you take another half a year for optimizing afterwards.”

The short time that the Chinese pilot projects took to ramp up was also much faster than among CSP projects elsewhere. Rather than the three or more years that CSP has taken to optimize in the US, several of China’s first round of successful pilot projects, including from new private firms Shouhang and Supcon, have taken as little as a year after grid connection to reach projected generation, despite their full scale.

So how likely is it that coal and nuclear developers would build renewables?

China’s new CSP projects will be built as part of gigantic gigawatt-scale renewable projects, comprising mostly now very low cost PV and wind. How this impacts CSP development depends on whether these massive firms understand the storage benefits of CSP.

They will definitely build out gigawatts of PV and wind, as they are already cheaper than the 5 cent coal benchmark. But the CSP might be more at risk at over 5 cents. Sun is concerned that to stabilize PV and wind, they might be tempted to just add short term battery storage – and ultimately be forced to default back to fossil fueled peaking plants for longer duration, greater capacity storage. The next few months will reveal their decision.

“If the state-owned energy companies do turn their eyes on CSP then I do believe most of the new CSP projects for 2023 can happen,” he said.

“But if they do nothing for the next three, four months, they definitely will not complete CSP projects within the deadline. So these next months are very, very critical. ”

Sun noted that the 2030 and 2060 climate targets that China has set require rapid gigawatt-scale changes starting immediately to supply enough 20 to 40-year power generation cycles: “All these companies do have some kind of caveat. They have to meet the targets for national carbon emission to reach peaking in 2030. So they will, you know, think of new kind of alternatives such as PV, wind, biomass, hydro and also CSP.”

It may seem implausible that big coal plant or nuclear developers would lead a nation in developing renewable energy, but in Norway and Denmark, state-owned oil firms Statoil and Danish Oil & Gas (DONG Energy; now Ørsted ) were similarly required to meet government targets and they have developed into world-leading offshore wind developers, with Ørsted developing 10 GW of offshore wind and Statoil pioneering floating technology. Perhaps having state-owned energy gives a government more say in making the necessary climate transition.

With electricity generation of over 8 million GWh annually China needs to get far more gigawatts of renewable energy online to meet these deadlines than any other nation. So is the pressure to meet carbon targets felt by these state-owned firms?

“Yes, I think this is the case, because if they fail to meet their emission target, definitely the whole national carbon neutralization target will be at risk,” Sun commented.