As a vital component of fertilizers, ammonia (NH3) is the second most-produced industrial chemical in the world. Annual production is around 180 million metric tons and almost 90% of this production goes to meet the global demand for agricultural production.

Ammonia is also increasingly seen as a potential green fuel for power production and some hard-to-decarbonize sectors like shipping, with many advantages over green hydrogen, the other contender. But the way that ammonia is made currently is incompatible with a safe climate: the Haber-Bosch process. 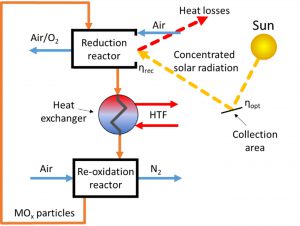 In the Haber-Bosch (H-B) process, ammonia is produced from hydrogen (H2) and nitrogen (N2) through a high pressure (150-300 bar) exothermic catalytic reaction at 350-500 °C. In the industrial H-B process, the essential feedstocks for this NH3 production process are obtained by consuming hydro-carbons: H2 is generally derived from methane (CH4) via steam reforming, and N2 is sourced from air after oxygen (O2) removal via the combustion of CH4. Additional hydrocarbon fuels are burned to produce the heat and mechanical energy required in the process, further increasing carbon dioxide (CO2) emissions. Globally, an average of almost three tons of CO2 is generated for each ton of ammonia produced.

But what if ammonia could be manufactured in an environmentally friendly manner from renewable energy sources? And how might a new approach take advantage of solar heat?

To design such fundamentally new processes, a great deal of sustainable energy research has been funded by governments internationally. To date however, most researchers have investigated how to convert the H-B process to either green (no fossil fuel) or blue (fossil fuel, with carbon capture and storage). These methods still deal with very high pressures to produce the ammonia.   Among the research institutions working on carbon-neutral ammonia production, the US DOE has funded a multi-institutional project that involves Sandia National Laboratories, Georgia Institute of Technology, and Arizona State University to use concentrated solar energy as the sole energy source.

How the novel ammonia process would work

A multi-institutional team led by Dr. Andrea Ambrosini at Sandia National Laboratories is  working on a different path to carbon-neutral ammonia, that does not involve the H-B process at all.   This team is assessing the feasibility of a unique solar thermochemical ammonia production process with no CO2 emissions.

Dr. Alberto de la Calle, Assistant Research Scientist on the ASU team, who co-authored Solar-driven nitrogen separation process from air based on two-step thermochemical cycle: thermodynamic analysis and A Low-pressure Reactor Design for Solar Thermochemical Ammonia Production, explained the reasoning behind the new approach in a recent call from Arizona.

“We propose a sustainable pathway to ammonia production utilizing concentrated solar irradiation for process heat separating nitrogen from air instead of fossil fuels and reducing pressure requirements to synthesize the NH3. To do that, we are developing an advanced solar thermochemical looping technology to produce (and store) N2 from air for the subsequent production of NH3 via an advanced two-stage process,” he said. 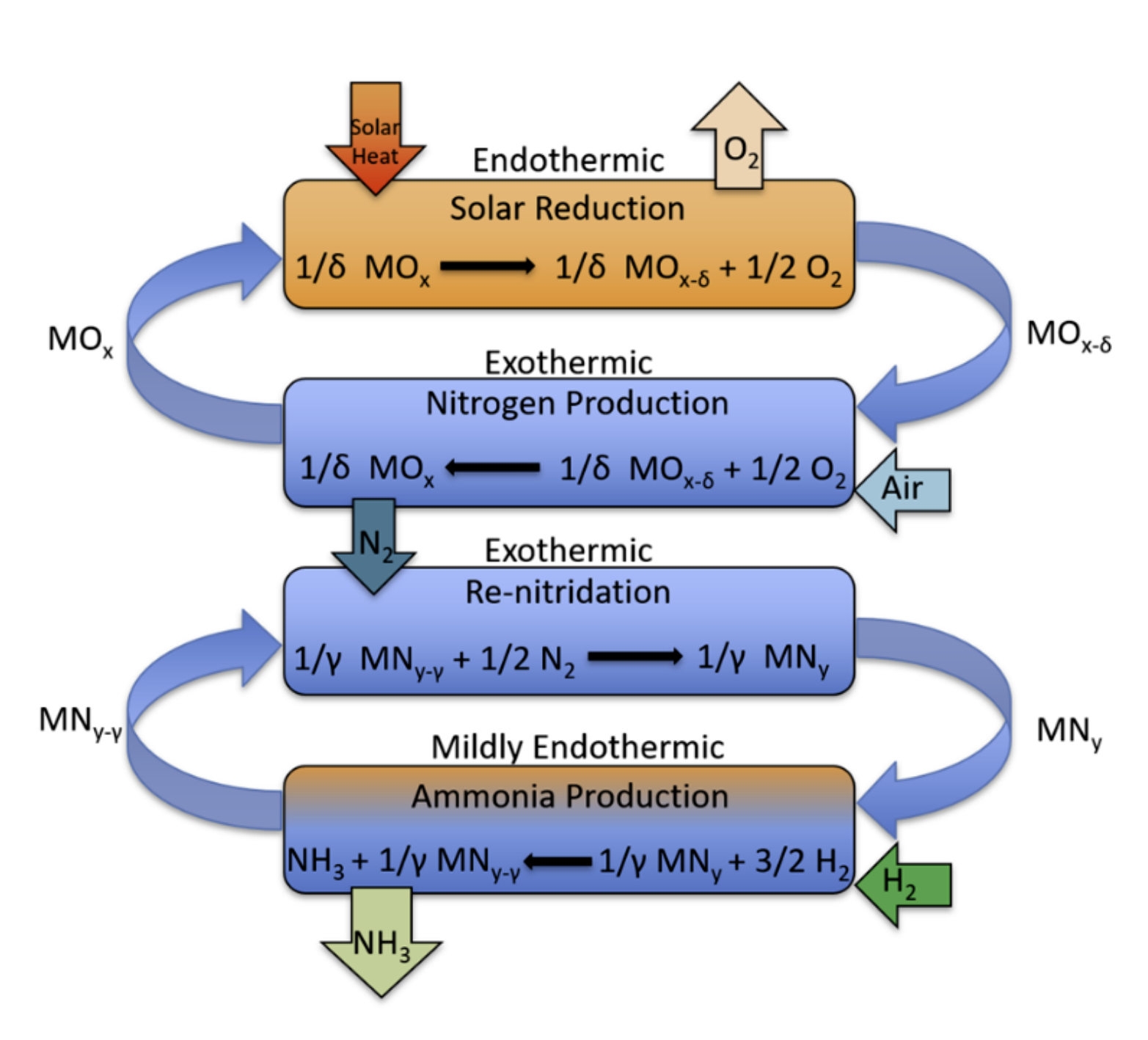 Step 1 – reduction of the metal oxide; Step 2 – separation of nitrogen from air and re-oxidation of the metal oxide; Step 3: ammonia synthesis by reacting H2 gas with a metal nitride*; and Step 4 – re-nitriding the now nitrogen deficient nitride with the produced nitrogen.
*Note that from the top to the bottom the steps order is: 1, 2 4 and 3    IMAGE@Alberto de la Calle

Their proposed process is divided into two stages, with two steps in each stage.

In the first stage, the team will separate nitrogen from air through a two-step thermochemical metal oxide cycle. The first step is the thermal reduction of the metal oxide, which releases some oxygen from its structure. Since this reduction reaction is endothermic (it consumes heat), concentrating solar radiation provides the energy in the form of heat. In the second step, this reduced metal oxide re-oxidizes in air, consuming the O2, resulting in a high purity stream of N2. Once the reaction completes, the metal oxide returns to the first step, closing the loop.

In the proposed second stage they would produce the ammonia with a two-step thermochemical metal nitride cycle. The first step of this second cycle is the ammonia synthesis reaction. In this step, a metal nitride is reduced (nitrogen is removed) by H2, directly producing NH3. In the second step, the nitrogen deficient metal nitride is re-nitridated by the purified N2 from the first stage, regenerating the nitride. Once the reaction is complete, the regenerated nitride can be re-reduced, closing the loop. Investigation of an effective working nitride for this very novel cycle is currently underway.

“Nitrogen separation from air in the traditional H-B process produces a lot of CO2,” de la Calle explained. “The traditional process obtains N2 from air removing the O2 via the combustion of CH4, this heat is used to produce more H2 via steam reforming, but CO2 emissions increase. We propose to use the sun to reduce a metal oxide that subsequently consumes the oxygen from air without producing any CO2. This technology is able to produce high-purity nitrogen without the need for post-processing (separating the CO2) as in the H-B process.”

Another advantage of this novel method is that they can store the reduced metal oxide particles – solids are much easier to store than gases – making it possible to produce nitrogen on demand. By storing the reduced particles instead of a gas, there is no need for expensive pressurized storage and compression work to introduce the gas inside the pressure vessel.

The team made a presentation on an ammonia reactor at the SolarPACES 2020 online conference with an analysis of the conditions for the nitrogen separation process from air based on a solar thermochemical cycle.

“Potentially, we think we could drive the solar reduction of the metal oxide at 800°C sweeping the O2 released from the metal oxide out of the reactor with air, and run the nitrogen separation step near 500°C,” he commented. 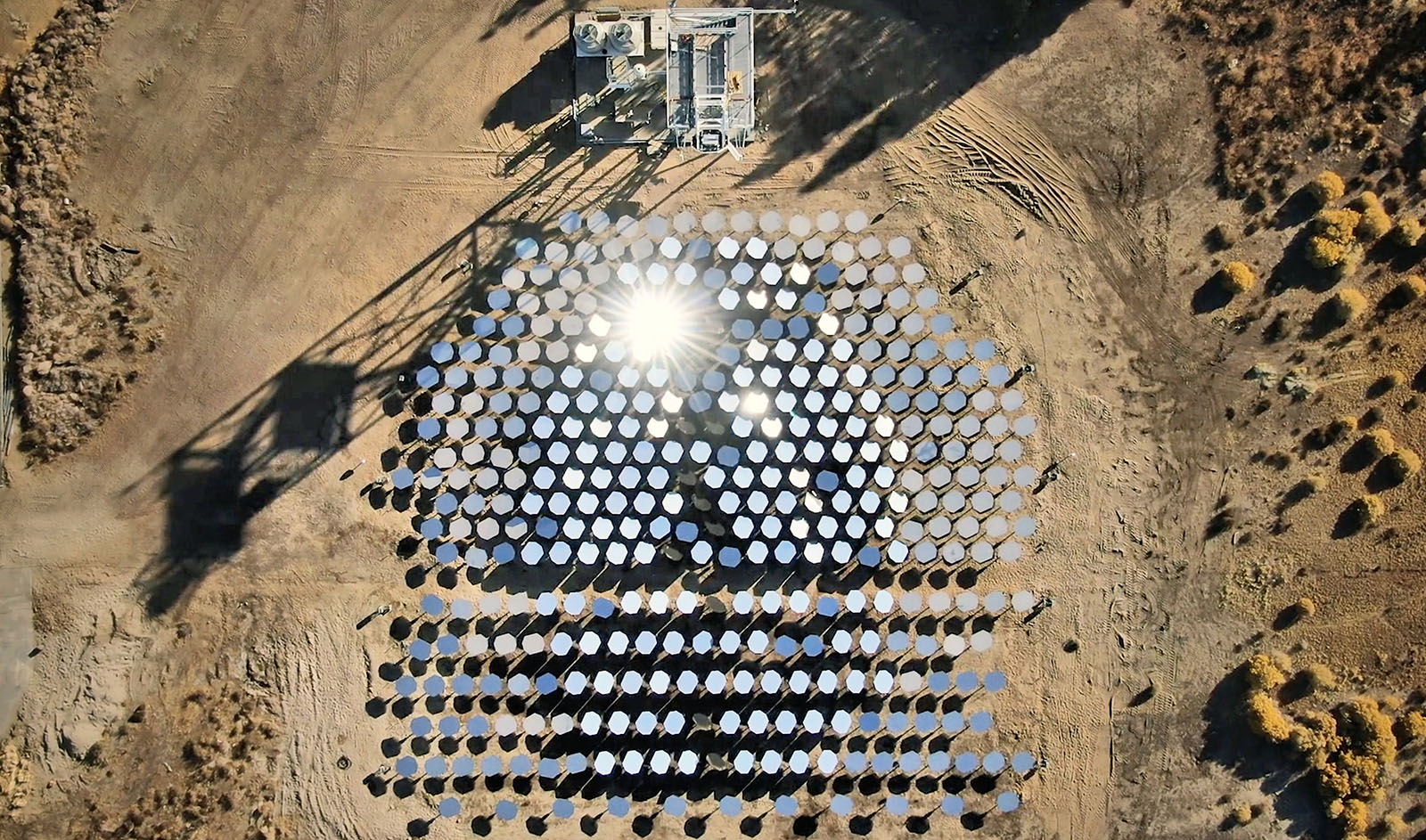 As with other solar thermochemical reactors, this heat would be supplied by a solar field of heliostats focusing thousands of “suns” of highly concentrated sunlight up onto a tower receiver/reactor. A solar thermochemical plant like the team’s proposed one dedicated for ammonia production would look a bit like a CSP plant, except that because it is not required to generate electricity, there would be no power block with a generator or steam cycle, just the solar field and the receiver/reactor where the first step (where heat is required) of the thermochemical process would be performed.

A novel approach departs from Haber-Bosch

The second stage of the process is the ammonia production through a thermochemical cycle at significantly lower pressure requirements than H-B. Haber-Bosch requires 150-300 bar to drive the reaction but de la Calle thinks the novel process could work at or under 30 bar pressure.

“The high pressures of H-B add cost to all the components of the process: reactor, heat exchangers, piping, and compression stages. In addition, the cost derived from the energy required in the compression is significant, accounting for about 20% of the total energy consumption. If we can produce ammonia at much lower pressures, many costs and CO2 emissions are avoided,” he noted.

On the other hand, these reactions would require higher temperatures than the Haber-Bosch process, which only requires between 350 to 500°C and he notes that they are still working on screening materials for this thermochemical cycle.

“We aim near 500 °C for both ammonia synthesis and re-nitridation reactions and a maximum pressure target of 30 bar. I think that with a well-designed heat recovery system we can meet all the heat demand reusing the heat rejection at the nitrogen production sub-process,” he said.

The reactions proposed in this project (metal oxide reduction, nitrogen production, ammonia synthesis, and re-nitridation) are at an early stage of technical maturity, and the ASU team has now begun the system modeling and detailed thermodynamic and techno-economic analysis to find the optimal operating conditions or size. The three-year award would culminate in early 2022.