Concentrating solar power (CSP) systems that heat water to steam for electricity and use molten salt or other material for heat storage have an advantage over photovoltaic systems in that they are far less sensitive to short-period fluctuations in sunlight intensity.

However,  high-concentration-ratio tower type systems that produce high-temperature steam and thus higher thermal efficiency are also very expensive. Conversely, Fresnel-type systems, which have pivoting strip mirrors laid on the right and left sides of a heat-collecting pipe, are less expensive, but produce lower-temperature steam and thus are less thermally efficient.

Now, as described in Tech-On!, Mitsubishi Hitachi Power Systems (MHPS; Yokohama, Japan) has unveiled a test facility for light/heat collection with a concentrating solar power (CSP) generation system that is a hybrid, containing both an inexpensive Fresnel CSP system and a tower-type system that is much smaller and less expensive due to the preheating by the Fresnel system. 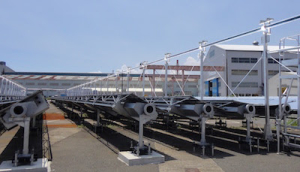 The Fresnel and tower types collect 70% and 30% of the total heat, respectively, making it possible to lower the height of the tower and thus facility cost. MHPS aims to realize a power generation cost equivalent to that of solar photovoltaic power generation.

The demonstration facility was built on about 10,000m2 of land. The number of heliostat mirrors is 150. The height of the heat-collecting tower is 20 m. It has a heat collection capacity equivalent to 1 MW and can generate about 300 kW of electricity.

However, in the prototype, the facility is used only for light/heat collection testing and does not have power-generation equipment. A heat-storage device (about 10 kW) is scheduled to be installed in October 2016, and molten salt will be used as a heat-storage material.
«After establishing the hybrid type at the demonstration plant, we will first aim to receive orders from sunbelt regions, which are suited for commercializing CSP generation,» MHPS says.

Sunbelt regions are areas where the intensity of direct sunlight is high. They include Spain, North Africa, South Africa, the Middle East, the US West Coast, Chile, Australia, India, and China.